The kit comes with decals and different parts for four variants. I built this example as belonging to No. 15 Wing, Nato Flying Training Centre, RCAF Moose Jaw, Canada, in 2003. 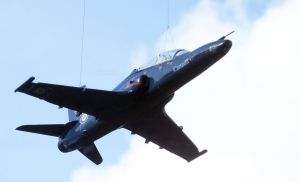 Taking off on a training mission from Moose Jaw field

As is often the case with kits I build, this one went for months between bouts of progress. I do not recall any difficulties apart from, right at the end, to get the canopy to seat correctly, I had to cut down the top of the rear ejector seat by a millimetre.

It is brush painted in acrylics.

The decals (transfers) seem to me a bit thick, yet the white is too translucent. I painted gloss white discs where the roundels go before applying those decals, negating that deficiency there, but the others are as is. The horizontal red Vs on the outside of the air intakes are not long enough, so I extended them with paint. The result is a bit ragged. (Some of the ‘No step’ symbols at the wing trailing edges are not very well positioned either.)

It comes with both crew, although I used a different one for the instructor in the rear seat for variety. He is reaching forward with one hand to adjust something.

I thought it was finished, but after taking the photos I realized I have yet to paint the nose probe silver.

The only deviations I made from the instructions were adding the back seater’s hand rails (stretched sprue) on the inside of the canopy and omitting the transparent pane between front and rear cockpits.