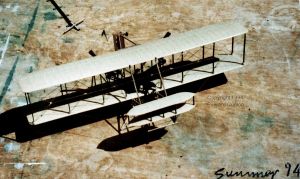 This Revell 1/32nd scale ASK-21 sailplane, here in the colours of the US Air Force Academy, comes without pilots, which is unfortunate. It is one reason I photographed it from below. Another reason is that its rudder is missing–along with other parts including a tailplane of my 1/48th scale BAC Lightning. Where do these part go?

This is my Trumpeter 1/48th scale Armstrong Whitworth Seahawk of the early 1960s. It was used by the Brits, the Germans (as here) and by the Indians. When I was a youngster, I often saw all-black Seahawks flying into and from Hurn airport, or Bournemouth International Airport as it is now.

The rear fuselage join is not good in this kit and it shows on this model. In addition, the rear of the canopy should be more like flush with the fairing behind the cockpit.

The ‘invisible’ hanging thread is all too visible!

The kit does not include a pilot, but fortunately I had a spare Airfix jet pilot. I had to file down the seat and the pilot to get the canopy on. 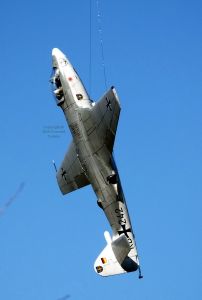 I set my Fuji Finepix HS 50 EXR to setting P rather than my customary AUTO for shooting against the bright sky.

Talking of the Avro Vulcan (see Plastic models–contemporary with Vietnam) here is one of its adversaries, although they did not meet in battle… 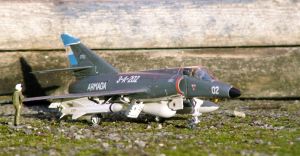 When I eventually discovered that the Falklands are in the south Atlantic, I was only slightly less baffled.

This is the Airfix kit of this small but effective attack fighter. 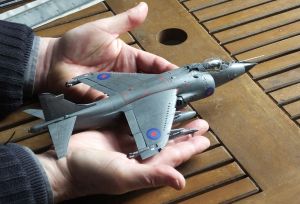 If I recall right, this is the Academy kit. The fuselage is 12 inches long and the rotor span is also 12 inches.

The standing figure is from another kit and the Remove Before Flight streamers are sold separately.

At the turn of the century I wrote some of the online help for the computerized forward maintenance of the AH-64.

This AV-8B Harrier is 12 inches long and 8 inches wide. I did not make a good job of the canopy (or of anything else much).

See Spring loaded to the freedom position—my review of Hammer from Above, Marine Air Combat over Iraq, by Jay Stout, 2007. It includes some Harrier action.

The Airfix 1/48th scale Buccaneer (see Plastic models–contemporary with Vietnam) comes in a box big enough for two kits. That must have struck the packers at the factory as ironic, because mine had two kits inside! Normally that would be cause for celebration, but this kit is so appalling it took me years to get round to building the second one, which is the Gulf War variant.

In both these photos I edited out the hanging lines.

While looking through Dark Visions, the Illustrated Guide to the Amtrak Wars by Patrick Tilley, I recognized the ‘Sky Rider’ reconnaissance and light transport airplane as an O-2 Cessna Skymaster without the front engine. I had an old 1/48th scale O-2 in the loft, matt black all over — it looked horrible — so I repainted it over a weekend in 2014. A bit rough and ready, but here is my idea of the Amtrak Federation Sky Rider Mark 2 (with the front engine). Its camouflage and modified U.S. ‘star and bars’ are copied from the artwork by Fernando Fernandez in the Illustrated Guide… 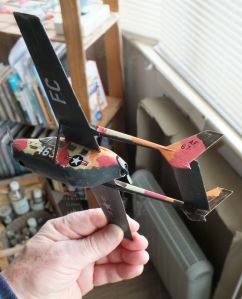 This Airfix HO scale MiG 241 Viper (Angel Interceptor) from the 1968 sci-fi television series Captain Scarlet and the Mysterons, itself made using puppets and scale models, is only six inches long. I bought it only to provide decals (transfers) for my 1/48th scale F-16XL, but it comes with enough spare decals to complete this kit as well.

You’re never alone with a drone

Seasons don’t fear the reaper
Nor do the wind, the sun or the rain
We can be like they are.

The 1/48th scale Revell kit of the General Atomics MQ-9 Reaper/Predator B (said to be the Skunk Models Workshop kit repackaged) is a simple and quick kit to make. There are no cockpit and crew details to do, for a start, and the parts fit together well. The finished model is 16.5 inches (42 cm) by 8.6 inches (22 cm).

Adding flex to both wings while the glue dries

Each wing consists of upper and lower half glued together. I used tape at both ends while the glue dried. In addition, as the photo illustrates, I set the wing flex for this in-flight model by clamping the root ends to a desk and pacing an object (pliers here) under the tips to raise them a little. Both wings are in the photo; one on top of the other. You can even see where glue that somehow got on a finger tore the paint I already applied. Grrrrr.

A thin aerial and a thin air data probe are each attached to the runner part way along. You must take care removing them from the runner. I used a sharp modelling knife with a light sawing action rather than my usual cutting action. I broke only the aerial initially. The nose probe is a casualty waiting to happen.

It is a large but spindly looking aircraft

According to info on modelling forums, its upside down paint scheme (lighter upper surfaces) is specified as FS 36375 on top and FS 36176 underneath. For the upper surfaces, FS 36375 equates to Humbrol #127 U.S. ghost gray. For the underside, FS 36176 is Xtracolour 157, but I used Humbrol 156 (dark camouflage grey) which is slightly darker (equivalent to FS 36173). The greater contrast arguably simulates the stronger outdoors direct light in a model displayed indoors. Both those paints are satin (semi-gloss) so I applied a coat of matt varnish. All paints I used are acrylics except for ‘polished aluminium’ enamel for the propeller spinner and pitot tubes and nose probe. 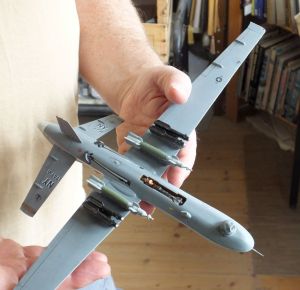 Weapons fit supplied with the kit

When retracted, the main wheels protrude, at least in this kit. I found no photos of the real thing in flight that showed that detail, so I assume it is correct.

Nam in Powered flight, which includes a photo of a real Cessna O-2 Skymaster undergoing restoration in 2004

The comments below relate to my Vietnam war plastic models page, but they were on the wrong page after I split the page, and I have not discovered how to move them:

7 Responses to Other plastic model aircraft