The Douglas A-26 Invader was a light bomber first used in World War 2, for which the Airfix 1/72 scale kit includes markings as well as for its use in Korea.

I modified the kit as best I could to look like the ‘remanufactured’ ones used in Vietnam, but I never got round to adding wing-tip fuel tanks. (I squared off the propellers at least.)

I am fairly sure this 1/35 scale Huey is the Academy kit.

…some reporters asked a door gunner, ‘How can you shoot women and children?’ and he’d answered, ‘It’s easy, you just don’t lead ’em so much.’

The preceding dialog is used also in Stanley Kubrick’s 1987 film Full Metal Jacket. It is lost on most Brits, whose loyalty is to convention, not to morality, which they do not have. When I explain that, in third world countries at least, women are non-combatants and, although they might carry psychopath genes, their lives of drudgery provide few opportunities for such tendencies to be expressed. Similarly, the children in his gun-sight have not yet had time to express their genetic nature, good or bad. My fellow Brits generally do not agree with the idea that people should be considered innocent until proven guilty, unless the people concerned are their own friends and relatives. The point being that they agree with the sentiment, but for the wrong reason. That matters because unquestioning adherence to convention by large numbers of people is inevitably disastrous. I digress…

“I love the smell of napalm—in the morning.”

The four soldiers (by Dragon, if I recall right) constitute a real kit build; every frag and smoke grenade, canteen, insect repellent bottle, arms, legs, head, helmet/hat, is a separate part that must be glued in place and painted.

They are supposed to be 1/35th scale, like the Huey, but they are too large.

One day this war is gonna end… 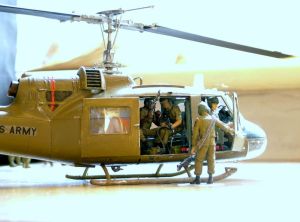 The standing crewman, unlike the other soldiers, is the correct scale.

Roly the hang glider sailmaker in a Huey at Bournemouth Airport in 2003. Photo by Gary D.

I do not know what this particular shade of green represents.

And here is a guest appearance of Gary D’s huge radio controlled Huey flying at Roly’s place. Photos by Roly.

I cropped the photos, altered the colours, and added some graininess so they look more like they were taken with a film camera in the 1960s.

…choppers fell out of the sky like fat poisoned birds a hundred times a day. After a while I couldn’t get on one without thinking that I must be out of my fucking mind.

Smoke in the LZ

Last of the gunfighters

The single seat and single engine F-8 Crusader was known as the last of the gunfighters because its successor, the two seat and twin engine F-4 Phantom, was initially a missiles-only interceptor.

A bizarre feature of the F-8, not evident in my 1/48th scale model, was the way the wing tilted upwards (with the aid of a small piston jack) for takeoff and landing. I used that feature as an animation in my 1992 computer-based training program Aerodynamics & Propulsion in an attempt to test the user’s understanding of the relationship between lift and angle of attack. (Flogging dead horses is another of my hobbies…)

The Lockheed U-2 is basically a sailplane with a jet engine from an F-104 Starfighter. This is the 1/72nd scale Airfix kit, which apparently is the same as the Italeri kit. The figures (which do not come with the kit) are each one inch tall. 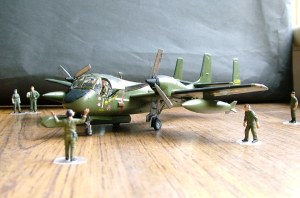 The Mohawk was a weird airplane in a weird war.

The F-4, initially developed as a navy interceptor, was so good it was also used by the US Air Force and the Marines as well as by the air forces many other countries including Britain. This 1/48th scale model is I think a Hasegawa kit.

Unlike the Navy model, on this one the canopy is a poor fit. (Why are they different? Everything else is the same!) I will get round to making it better some time.

In this photo I edited out the hanging lines as best I could.

…more F-4s were lost due to out-of-control maneuvering by the pilot than were downed by the enemy.

Here are the undersides of both models. 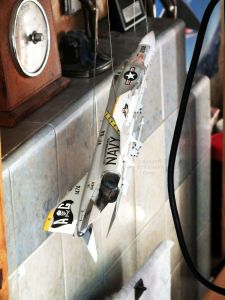 …a group of local pilots were drinking beer around a campfire one night when one of them told the story of how he had been flying in the Owens Valley and every time he got low a military fighter would swoop in and make him a thermal. Everybody laughed, told him he was full of crap, and the story was dismissed as nothing more than a tall tale.

In the article, hang glider pilot and astronaut Mark ‘Forger’ Stucky describes flying his 20-ton supersonic F-4 Phantom low in the Owens Valley and repeatedly cycling his afterburners to trigger a thermal for a friend of his in a 20 mph hang glider struggling to find lift. See Hang Gliding & Paragliding Vol39/Iss03 Mar 2009 (linked later on this page).

Another F-4 driver was Rich Finley, who designed, built, and flew the Windlord series of early Rogallo wing hang gliders. See under Trial and error in Hang gliding 1973 part 1. 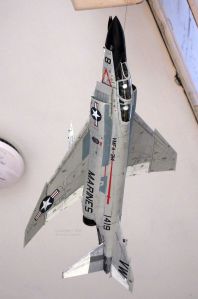 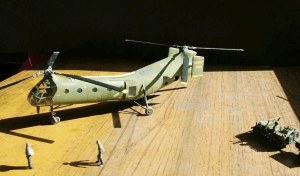 It would seem fitting, ordained, that they should live in the Highlands, among triple canopies, where sudden, contrary mists offered sinister bafflement, where the daily heat and the night-time cold kept you perpetually, increasingly, on edge, where the silences were interrupted only by the sighing of cattle or the rotor-thud of a helicopter, the one sound I know that is both sharp and dull at the same time.

The H-21 was soon replaced by the jet-engined UH-1. 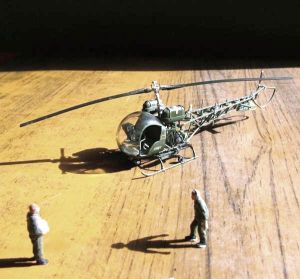 In contrast, this Airfix 1/72 scale Martin B-57 Canberra is fairly large. Originally a British design, the B-57 light bomber was used in Vietnam by the US Air Force and by the Royal Australian Air Force.

Mixed media image of a Lockheed SR-71 in flight

One of my internet friends combined a photo of my Revell 1/72nd scale SR-71 with this backdrop, putting it on the edge of space. Feel the heat from those exhausts!

I am almost certain this was a Revell kit.

Perched on back of chair

Climbing out from Ubon, Thailand. I edited out the hanging lines in this photo.

Gunship, Spectre of Death, my Italeri 1/72nd scale Lockheed AC-130, illuminated by some snippets from Zeybel’s book of the same title

Phantom of the operator—my review of Phantom over Vietnam by John Trotti, 1984

Spring loaded to the freedom position, my review of Hammer from Above, Marine Air Combat over Iraq, by Jay Stout, 2007