Engineering development then and now

Engineering development then and now

This is a sub-page, by guest contributor Jonathan H, of Mentioned in dispatches, my Italeri 1/9th scale Triumph 3HW motorcycle of World War 2, in which I stated the following:

Building this kit taught me something that I sort of knew already and I find it a bit disturbing. It is that there was something radically primitive about the engineering design of motorcycles of this era. (Even my first trials bike, a 250cc Greeves of the 1960s, incorporated design elements that no rational mind would include on a trials bike.) It is not just that this or that component shows signs of being added as an afterthought. It is as if everything, from the bottom up, has been added as an afterthought.

Struck a chord with me as an engineering designer as I think that there is a clear reason for this. Any engineered product goes through several unavoidable development steps. These are concept/project design, which provides the overall envelope and configuration. This is then followed by a few rounds of design iteration as elements that do not work together are shaken out, and then finally a detail design phase. 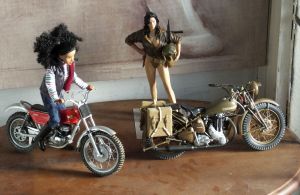 In the past (pre Computer Aided Design) by the time that the detail design phase was reached, any changes to the underlying platform were difficult or impossible to implement and so small ancillary systems on products of this period tend to look a bit “strapped on where they will fit.” Exceptions to this are well established products with many years of refinement behind them so that earlier compromises were considered earlier in the design process. A good example is the bicycle, which started to sprout brazed on fittings for gear levers in logical locations rather than nasty clamp on fittings. Your 1940s motorcycles were a fast developing field and so the slightly strapped together look was a result of this process.

What happens now is that we can prototype electronically. As a result of that, reversing through the design process to adjust the underlying configuration is not such a pain as to be impossible. This means that products can now be very refined indeed before any hardware is created. It doesn’t always happen this way as many engineering designers are simply not very good! 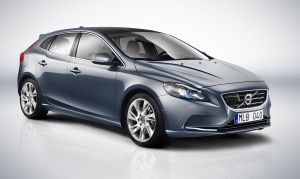 However, when it does work it works very well. A good example is the current series of Volvo cars (biased, as I drive one). Five years ago they were taken over and design authority handed back to Sweden. In that time they have completely revised their entire range from the ground up and they are very complete and well balanced examples of the modern approach. Using the old methods, they could have started down that road but we would see many sub-elements from previous designs being lashed into place and the result would feel unfinished and rough.

One of the first companies to go all the way with this was Embraer with the 170 and 190 regional jets. I saw this first hand as I was the certifying authority’s team leader for the structure. Both aircraft were fully electronically prototyped including very accurate flight simulation and test flying prior to the actual build. It looked impossible at the time, but it was actually a very fast and efficient process. The result is a family of aircraft where the spare parts fit perfectly and maintenance is simple as proper access was designed in and simulated before hardware came into existence.

Embraer regional jet (Wikipedia image).
A member of our hang gliding/paragliding club and world record holder, who died young, flew these for a living.

The down side of all this is with the engineer who can no longer bash out sketchbook concepts and see early prototype hardware within a few months as the prototypes are electronic until fairly late pre-production. The overall development period is thus shorter but the time to hardware is often a bit longer.

Thanks for identifying a rather key observation. Until I read your piece this had not fully occurred to me.