The kit canopy has no bulges in the side panes. Canopies on the various prototype AH-56s seem to vary in their bulgedness. One looks hardly bulged at all, so I think the kit canopy is not far wrong for that example. However, I like the bulges, so I created a bulged canopy. 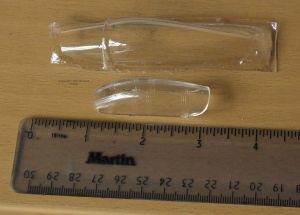 For the panes each side of the nose gunner, whose compound curves defied the F-15 canopy and all the other canopies in the Clear-Vax set, I used bits sawn from the front part of a 1/72nd scale Cobra canopy. I filled in the many gaps with transparency glue. The proportions of the segments are not exactly correct. A lot of work for a dubious result.

The pilot’s instrument panel, behind the copilot/gunner’s seat, stuck up too far in my opinion, so I cut it down a bit. I also had to lower the two crewmen in their seats by cutting their feet off and filing down, or rather up, their rear ends. 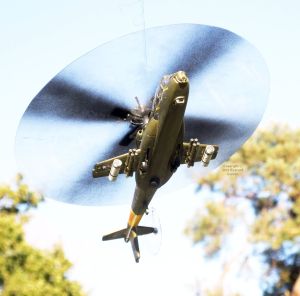 Rotors are clear plastic, the main rotor ‘blades’ being applied with a spray can of matt black. 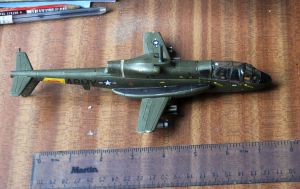 Completed except for the rotors

The weapons are from an inexpensive Cobra kit and the rocket pod pylons (shortened) are left over from an Airfix Harrier. 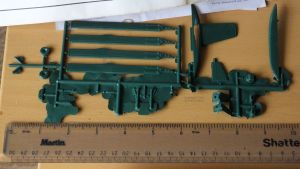 “What do you mean, ‘Flash Gordon approaching’?”

I don’t recall ever seeing so much flash before. Fortunately, it is thin and easy to cut away. 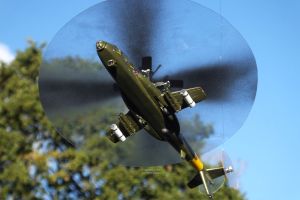 Weapons from a Cobra kit

When displayed on an average size computer monitor, the model in these photos is much larger than its actual 8.5 inch (22 cm) fuselage length.

The box art seems accurate as regards stencil markings and such like, the smaller of which are not included as decals. 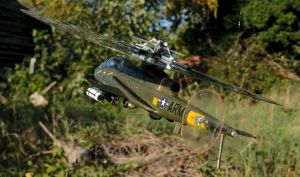 The rigid rotor system of the AH-56 was the brainchild of Lockheed engineer Irv Culver, for which he received the Klemin Award for “…notable achievement in advancing the field of vertical flight aeronautics” by the Vertical Flight Society in 1966. (Ref)

Culver subsequently contributed to the development of hang gliding in the early 1970s.