These models represent airplanes of the 1960s that did not feature in the American war in Vietnam. 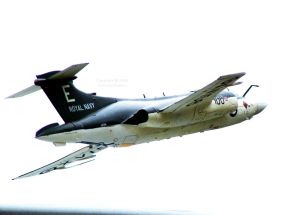 The Buccaneer was a huge aircraft and it makes an impressive model. This is the Airfix 1/48 scale kit. Rather crude, unfortunately. 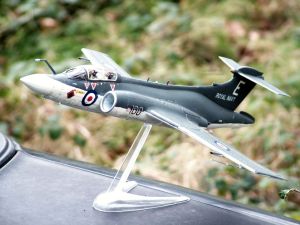 The huge box had two kits inside. See Gulf War Buccaneer on my Other plastic models page.

One of my friends on the web combined a photo of my 1/48th scale BAC Lightning with a backdrop to create this image.

I once sat in the cockpit of one of these and it gave me a faint notion of what it must be like to be in that cramped space at high altitude. (Happiness is missile lock at the speed of sound…)

This is the Airfix 1/48th scale kit. Astonishingly, it is one of the finest kits I have ever built. 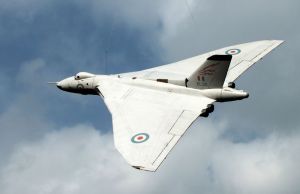 The Airfix 1/72 scale Avro Vulcan is a moulding from the 1970s, but it is not too bad. With its 19 inch span and huge wing area, it is an impressive model.

Airfix periodically re-releases it. This one came with decals and paint instructions for three grey/green low-level camouflaged examples and this all-white high altitude version. (The white scheme was for a role made redundant by Britain’s missile-launching submarines.)

I used acrylic paints for this. I never used them before. The paint is water soluble, but dries quickly to non-soluble. The white is a much purer white than equivalent enamel paint.

The fishing line hanging lines in the first photo disappeared in the glare from the sky, but you can see them in the other photos. 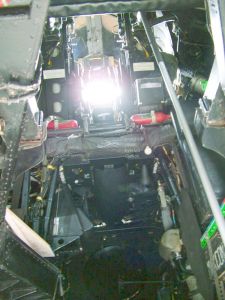 View upwards from the entry hatch

In the view upwards from the entry hatch in the under-belly, the glare is from the windscreen with the backs of the pilots’ ejector seats on each side. Way up high!

The interior photos, which I took in 2006, are of the real thing, incidentally, in case you think I super-detailed the interior of the kit!

Rather like Dr. Who’s Tardis, the cabin of the Vulcan is bigger inside than out. And it is pretty big from the outside. Climbing up into the crew stations feels like caving. The 1965 James Bond film Thunderball provides only the vaguest hint of the alienness of the Vulcan.

Consider that the Vulcan was the next bomber designed by the Avro team after their Lancaster of World War 2. (The intervening Lincoln and Shackleton were just modified Lancasters.) According to one book on the subject, they were ‘hand built’ without the benefit of modern quality control, as a result of which every one flew differently. One was known to turn one way perfectly well, but it was almost impossible to turn it the other way!

The navigator radar, navigator plotter, and air electronics officer sat in rear-facing seats. In my photo, a barrier (green edges) prevented access to this area. Notice the overhead grab handles from a London Underground tube train, but white instead of black. Notice also that, unlike the pilots’ seats, these are not ejector seats…

The moulding might be 40 years old, but the decals (or transfers, as we used to call them in Britain) are modern and of top quality. The roundels and fin flash of this version are pale blue-grey and greyish pink. (The roundels of the camouflaged options are the normal darker blue and red.)

The Vulcan among other models of the same 1/72 scale shows its sheer hugeness!

We had our normal pre-flight briefing and were assured that there would be no problems at all. A slight asymmetric drag effect, but no worries. I released the brakes and just managed to prevent the aircraft careering off the runway by applying braking, full nose wheel steering and full rudder. I hauled the aircraft into the air and all of a sudden my problems disappeared. Incredibly everybody from our chief aerodynamicists downwards to myself had forgotten about the asymmetric inertia effect. 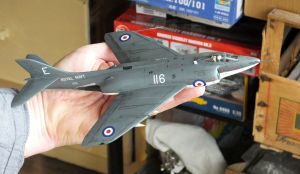 This Xtrakit (Hannants) Supermarine Scimitar in 1/72nd scale won’t win any plastic modelling prizes, but I used to see them often operating out of Hurn Airport (as it was then) in the mid-to-late 1960s.

Early on in the Eclipse project someone said he wasn’t sure you could aero-tow a delta wing. Mark Stucky (see Forger in Space flight and hang gliding) spoke up. “I know you can because I’ve done it.” He explained that he had aero-towed in hang gliders many times.

In the 1960s I saw Sea Vixens, Scimitars, and Sea Hawks fly in and out of Hurn Airport (now Bournemouth International Airport).

Hanging up. (The light colored diagonal thread is a cobweb.)

Real thing on static display in Christchurch, Dorset, in 1998

The Airfix 1/48th scale De Haviland Sea Vixen is one of their newer kits of museum quality. I made mine in a rush because my time is limited (cancer). In addition, I kept the partly built kit for more than a year in my air conditioned storage unit (an old car out the back with aluminium foil in the windows to keep the sun out) and somehow the decal (transfer) sheet went bad. Maybe it got damp. I was able to use the main decals, but they were stuck firmly to the backing sheet, which I soaked in detergent and peeled off each decal with a finger-nail, using Decal Fix to attach it the the model.

In the early 1990s I wheeled my old mum around the real thing where it was set up on concrete blocks at Somerford, Christchurch, Dorset. The nearby De Haviland factory that made them had long degenerated to a workshop making cast iron wheels for railway station trolleys and similar. When I was at school, it was known as the employer of those who left with no qualifications. I never imagined that, as a degree qualified and experienced computer programmer, I would end up working there as an unskilled manual laborer for the national minimum wage. (That was after my mother died.) I digress…

Top view showing its peculiar crew accommodation and, on my model, the degraded decals

The Sea Vixen was a large airplane and the model is correspondingly large with a nearly 13 inch (32 cm) span and roughly 14 inch (36 cm) length. 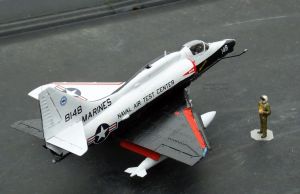