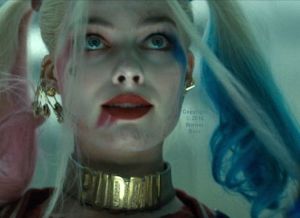 The insane Harley Quinn, one of two women in the suicide squad

This film, which I have on DVD, is a combat action fantasy rather than serious science fiction. Its view of humanity at one remove (or maybe two removes, time and technology) illustrates features of the present ‘human condition’ by exaggeration. (Sometimes not much exaggeration.) 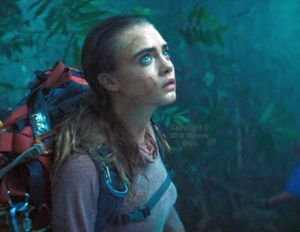 Archaeologist Dr June Moone wanders into a cave and breaks open the wrong effigy. She emerges as an ‘extra-dimensional entity’ called the Enchantress. Cavers be warned. 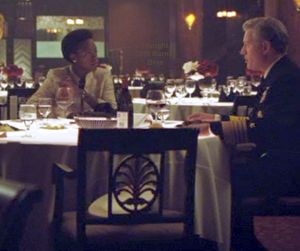 “You want to put our national security in the hands of witches, gang bangers, and crocodiles,” says the admiral to the black woman, whose task is to save the world from the destructiveness of the extra-dimensional entity. Crocodiles? One of the squad is an ‘evolutionary throwback’; a human with a lizard-like physique. 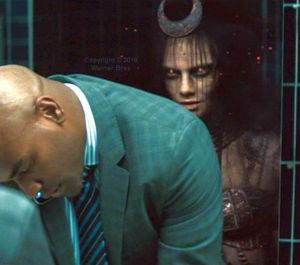 Have you ever felt that you are really from an ancient race placed in this life among an alien species temporarily? Maybe as a kind of test? Here, the enchantress catches up with her brother (that is, her brother in a previous life) at a subway station in downtown Midway City. (It was filmed in Toronto, Canada, according to the wiki.)

We see this through-train (not stopping or even slowing up) from the viewpoint of the enchantress’ brother — freed at last from his imprisonment in contemporary human form. For me, this scene alone, of little more than one second duration, is reason enough to watch the movie. The special effects impart a feel of transcendental power, but not unlimited power. (I use the word power in its simple physical sense.) You would not want to be on that train.

Many scenes featuring H-60s resemble those in the docudrama Black Hawk Down, perhaps unsurprisingly given the basic plot of ‘terrorists’ taking over a city while US special forces, setting out from the local airport, attempt to take it back.

There is enough anti-aircraft action to see the method used; basically, how some lizards catch insects. The troops — accompanied by the suicide squad — come across one aircraft wreck after another in the streets (including a B-52, an A-10 Warthog, and an airliner) together with innumerable partly melted vehicles. Those static wrecks are subtly impressive.

Harley Quinn illustrates a widespread belief (in Britain at least) that seems to me to have some justification. That is, women select as fathers for their offspring the kind of males that they do not want as fathers for their offspring, paradoxically. (I have overheard several women over the years state that they are bringing up their kids to somehow not inherit the father’s characteristics, but they do not say how they intend to achieve that feat of genetic engineering.) A related belief has it that women always go back to sex partners who beat them up. In this film, Quinn’s partner causes a head injury that results in her being attracted to the guy that caused the injury. (That is, attracted even more than she was before.) Is that what is happening in reality? 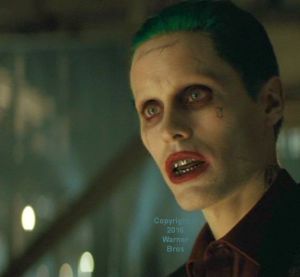 The Joker represents the kind of chap the best-looking women fall for in this possible future. It seems that the degeneration of the race is set to continue, if this film is anything to go by. 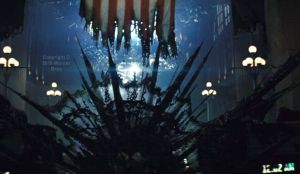 Typical splayed stalactites of metal, stone, and glass formed by hits from the aliens’ weapons

Surrounded by the strong and the brave — although here their talents are misdirected — this vision of the future has its female lead attracted instead to the geezer in a suit. When she is not attracted to the Joker, that is. 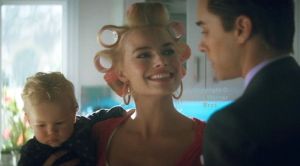 I mentioned this phenomenon to a female acquaintance (that women are attracted by bad genes) and that I did not understand where that instinct comes from. After all, the tall, the strong, the brave and the righteous are the result of zillions of years of evolution by natural selection (and surely artificial selection). Those are characteristics that raise us above the lower animals. She pointed out that gangsters and businessmen are the result of just as many zillions of years of evolution. It is an obvious fact that never occurred to me. What else have I missed? 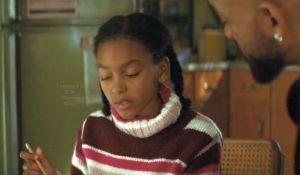 The hit man is well qualified to help his daughter with her trigonometry homework, yet she surprises him with her own analysis. He stays ahead only by importing into the equation the need to account for the effects of wind, relative motion, and other confounding variables. In this film, as in real life, talents are genetic.

For a movie based on technoviolence, I find it strange that, like its predecessor Black Hawk Down by Ridley Scott, they could not bring themselves to make the helicopter crashes extreme enough to look realistic. (Have you ever seen videos of real helicopter crashes? Best not.)

Batman makes several appearances, but he is the least convincing Batman I have ever seen. Maybe because he has the heavy-looking face of a businessman or politician. Similarly, Dr June Moone/the enchantress failed to convince me that she is the right woman for the job.

While the action filming uses a wide sweep of screen-filling scenery, there are too many close-in views of actors’ mugs in dialog. In that respect it resembles those junk films made for what in Britain is the self-styled ‘working class’, who respond to ‘drama’, presumably because they do not understand action. (Most people in Britain cannot grasp the concept of acceleration, for example.)

The ending is unconvincing. It has the feel of ‘design by committee’ where they reached no agreement on how to end the film before budget and timescale constraints closed in.

Suicide Squad is a spectacular action fantasy that highlights our current problems by exaggeration. In addition, like Sucker Punch, also by Zack Snyder, it has a satisfying quantity of zombie slaughtering.

Stairway to Paradise—my review of the movie Sucker Punch, 2011, also by Zack Snyder