The movie Lolita by Stanley Kubrick, 1962, reviewed by Everard Cunion in January 2014

The first scene of this movie gives away the ending, so we know whodunit. The rest of the film reveals what led up to that drastic act. To complete the story, text superimposed on the ending backdrop states what eventually became of the viewpoint character, a professor of literature, who exchanges his old life in the UK for one in small-town USA.

The scene is set by air-to-air film of a propeller-driven Lockheed Constellation, which plied the Atlantic airways into the dawn of the jet age, bringing (doubtless along with other passengers) the occasional divorced literature professor to the new world where he can rebuild his life.

The extremes of behaviour depicted in this movie are uncommon, but as we know from news reports, not very uncommon.

Looking for a new England

I have never been to New England, but I am surprised that it looks so much like (old) England or perhaps south Wales.

Lolita was played by the 14 year-old Sue Lyon

According to IMDB, Lolita was filmed partly in the UK and partly in the USA. The house where Lolita lived with her mother, supposedly in New Hampshire, was actually filmed in Buckinghamshire, in England. 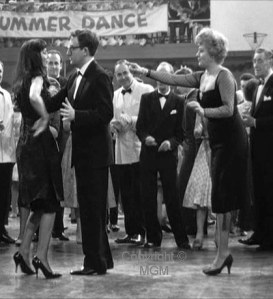 In the summer dance scene, the mysterious Clare Quilty, played by Peter Sellers, does not at first notice Lolita’s mother attempting to catch his attention, which is held by the original Goth woman. This film has something for everyone…

I would guess that, to some of us, Humbert’s possessiveness, which gradually turns into paranoia, strikes a chord. However, to those without similar drives, his behaviour might seem incomprehensible. Maybe this movie is not for them. 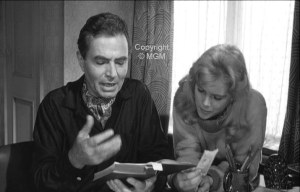 Humbert, played by the appropriately distinguished British actor James Mason, discovers that Lolita is intelligent as well as good looking.

My old dad, who was an older father, taught my brother and me never to point a firearm at someone unless you really intend to shoot that person. This movie demonstrates the soundness of that advice.

Revolver in hand and thinking aloud, Humbert concocts an apparently convincing story that will let him off the hook in what he is about to do. He is an above averagely intelligent and educated man, who events happen to place in circumstances of supreme temptation and the opportunity to satisfy that temptation. (See my digression, Normal Normans thinking aloud.) However, he is in danger of making a mistake commonly made by above average people; that of overlooking the possibility that he is being manipulated by another person of even greater intelligence. Or perhaps a different kind of intelligence (which amounts to the same thing). 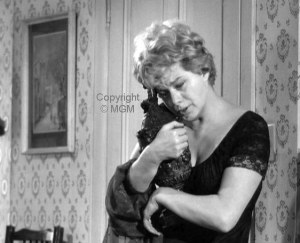 Lolita’s mother is a pretentious hick. However, even pretentious hicks have emotions of a sort. This film avoids the trap of creating overly simplified cardboard cutout characters.

To satisfy our need to be entertained, a fictional narrative needs to follow a chain of reasoning: Action A causes outcome B, which leads inevitably, but only in retrospect (and surprisingly) to C. You cannot rely on coincidence, so a plot that relies on coincidence fails in suspending disbelief. A sound artistic rule, no doubt. (Why do we have a need for such narratives, given that real life is far too complex to be accounted for by them? Surely it would be adaptive not to be born with a need for such stories! I digress…)

At the critical point, the opportunity of a lifetime slips from Humbert’s grasp!

The genius of great writers and other storytellers is that they turn an artistic rule on its head to achieve greater effect! Coincidences do happen and they can have large effects. Incredibly, only a minute later, factors outside Humbert’s control achieve his desired result. 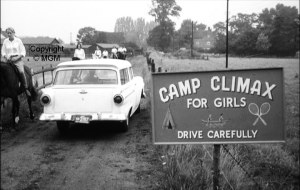 As The Hitchhiker’s Guide to the Galaxy pointed out, paranoia is normal. Are Humbert’s suspicions, which Lolita ridicules, justified? 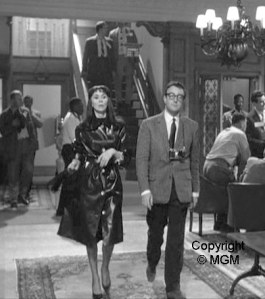 The Goth and Quilty turn up at the same hotel at which Humbert and Lolita are staying. 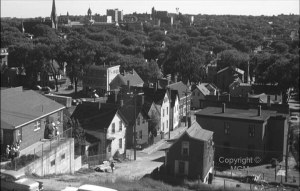 According to Wikipedia (January 2014):

The second half contains an odyssey across the United States… shooting many of the exterior scenes in England with some back-projected scenery shot in America, including upstate eastern New York, along NY 9N in the eastern Adirondacks, and a hilltop view of Albany from Rensselaer on the east bank of the Hudson.

Humbert on the wrong side of the road

The film skips three years, during which (as Lolita subsequently tells Humbert) she runs off to New Mexico before returning north. The house in which Humbert finds her reminds me of where I lived in London to about eight years old. (Look at that the kitchen!) Indeed, it was filmed in England. 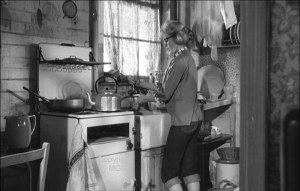 I won’t give away the ending, although there is no mystery about it because it is shown at the beginning, the main part of the movie being the back story to that event.

Some indoor dialogue sequences were clearly assembled from several shots, but Lolita’s direction of gaze does not match when the camera view changes.

Humbert fails to recognize Quilty (Peter Sellers) in various disguises. It is fair enough because, like all stories, this one necessarily omits the clutter of Humbert’s day to day life, so in reality he likely would not recognize Quilty. However, Quilty is easily recognizable to the viewer to whom only minutes have passed since his last appearance, rather than months. So, when Lolita explains all that to Humbert, it seems to me unnecessary and heavy-handed. (In this respect, Lolita contrasts with Dr Strangelove, also by Stanley Kubrick, in which Sellers again plays several parts. However, in Dr Strangelove, each incarnation of Sellers bears no resemblance to the others.)

With all that scenery (and some desert travels not included in the screenshots here) it would have been better in colour.

The Goth is the perfect complement to Lolita and the other women in the film. (Even Lois Maxwell – the original Miss Moneypenny in the James Bond movies – appears in Lolita. In uniform too…) I would have liked to have seen more of the Goth lady. Some close ups and with some clothes off.

This story, purportedly about a fictional English academic, is about you and me (I doubt that anyone who is not an alpha male would have read this far) but placed by chance in a land of opportunity. This land of opportunity bites back hard, however. I felt that, if I were in Humbert’s circumstances, I would do exactly as he did. That is one of the attractions of this story; it is so plausible.

It portrays a different facet of that mystical place, the USA, which to my generation is an advanced country populated by astronauts and airline stewardesses. Although in black and white, the scenery is well filmed. However, the apparent Britishness of the New England it portrays is partly illusory in that much of it was filmed in old England.