As far as I know, the rotary cannon (derived from the Gatling gun of the Wild West) wielded in the screenshot by one of three Oriental monsters who go after Babydoll, was used first in the Vietnam War. However, the backdrop to this battle is the bitter cold resembling a mountainous region of Korea, where US forces fought Communists ten years previously. Babydoll would have read and heard about it during her school years, her mind storing its images as raw material for the fantasies that the film implies she uses as an escape from the sexual cruelty of her stepfather. The Vietnam War was front-page news nearly every day in the USA (and, presumably, in Vietnam). Therefore, her mixing up of these two wars (together with the ancient temple familiar to the American occupation forces of post-World-War-2 Japan) is thoroughly reasonable.

An appropriately chaotic version of the song White Rabbit, performed by Emiliana Torrini, accompanies some of the war scenes. It was written by Jefferson Airplane’s Grace Slick in 1965 or ’66 and its lyrics are based on the Alice fantasy books by mathematician and logician Lewis Carroll in the late nineteenth century. Both versions of the song are worth looking up on YouTube. Try the following links:

Both are also available from iTunes, as is all the film sound track music.

Doubtless the bipedal oriental monsters have a logical origin for someone of that place and time too—and I would be interested to hear about it.

Lewis Carroll would be amused by a clever visual effect that takes the two sisters Rocket (played by Jena Malone) and Sweet Pea (Abbie Cornish)—and us—through the dressing room mirror.

The Imperial War Museum photo is of the Sopwith Camel flown by Flight Sub Lieutenant Stuart Culley when he shot down Zeppelin L 53 in 1918. The twin Lewis guns atop the wing were in a fixed position, so he fired up at the airship while near the stall at the Camel’s maximum altitude. In the movie, Babydoll achieves the same result from the ground by firing a hand-held Lewis gun upwards at the airship. Not only were airships in those days filled with hydrogen, they were painted with a chemical similar to rocket fuel… 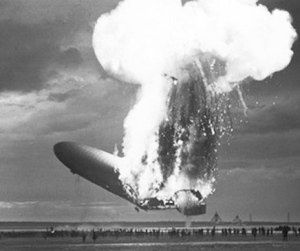 A film consisting largely of dreams and/or waking fantasy could so easily be total junk. However, part of the genius of Sucker Punch is the way it avoids that. (Every fantasy is not only constrained by Babydoll’s circumstances, but entirely dictated by them.)

The screenshot shows Sweet Pea (Abbie Cornish) on a battlefield in France (in the fantasy). If you think the M-16 she is using is out of place and out of time, wait until you see the white rabbit…

Amber settles in to a new kind of tank. Although not apparent from this camera angle, we are in a main trench.

However, externally at least, the ‘automatic soldiers’ on the cover of a magazine in that last year of the war (1918) are only a few steps away from the mechanical white rabbit in the movie, piloted by Amber. See http://www.retronaut.co/category/wwi-eras/ for more Electrical Experimenter cover art featuring designs of similar machines. 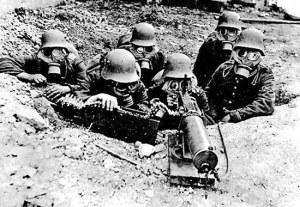 Actual tanks in the Great War were slower, less manoeuvrable, and less well armed than the white rabbit. (And I doubt that their crews were supplied with gobstoppers.) However, they were just as deadly to their victims. A teacher at my school said her father was in a collapsed trench that was run over by a tank. It took him 20 years to die from his injuries.

The movie depicts the trenches as described by Ernst Junger in Storm of Steel. He should know. He was there.

Tommies make way for the strangely attired newcomers as they move up towards the white rabbit with the C.O. behind them. (My dad never mentioned that...)

My father, who also fought in the Great War, mentioned the British being attacked by ‘a river of Germans’; a vast number of enemy soldiers coming at them. In Sucker Punch, the commanding officer (Scott Glenn) explains to the girls how the Germans have a seemingly infinite supply of troops. It is an absurd idea rooted firmly in the best-known horror story of the time. The ‘animated short’ titled The Trenches, supplied on the DVD, depicts that work being carried out.

However, ideas in dreams are often absurd only in retrospect. And how do you know you have woken up? How do you know that what seems perfectly reasonable now you will recognize as absurd when you really wake up? Sucker Punch uses that philosophical problem to full effect. Having returned from one or other insane piece of action, I had to remind myself that we were still in a fantasy, although a more realistic one than that from which Babydoll—and we as the viewers—have returned.

A Fokker triplane drops a bomb so close to the white rabbit that Amber (Jamie Chung) struggles to keep it upright.

"Don't ever write a check with your mouth you can't cash with your ass."

The jumpmaster is played by Scott Glenn. The camera follows the girls out that door…

Incidentally, Scott Glenn plays several linked roles. He is the wise man/armourer in Korea, the commanding officer in the steampunk edition of the Great War, the B-25 jumpmaster in a dungeons and dragons version of World War 2, Grunt Six in an alien planet variant of Vietnam, and another individual (also in uniform) at the end. “Oh, and one more thing…”

If fire-breathing dragons exist somewhere in the universe, I feel sure they are exactly like those depicted in this movie. They would be immediately recognized by Tenniel and Carroll. The integration of computer animation and live action is seamless.

North American B-25. This is a Canadian example in D-Day paint scheme.

Incidentally, the observant viewer might notice that the B-25 Mitchell in the movie has been modified in such a way that, if it was done that way for real, it would require large rudder deflection when advancing or retarding the throttles. (Check the starboard engine.)

Modified or not, the B-25 was capable of outrunning a Jabberwocky only in a dive (apparently). The problem with a dive is that, eventually, you have to pull up. Damn.

Amber as the pilot of the inevitable Huey in the Vietnam scene is not so far-fetched. (It is a post-Vietnam twin UH-1 with a ‘glass cockpit’.) Hammer from Above, Marine Air Combat over Iraq, by Jay Stout, 2007 (see my review) includes at least one photo of a female Huey crew member who fought with distinction in the 2003 Gulf war.

If helicopter pilots looked like that in Nam, the US government would never have needed to implement the draft!

A candidate for a real event that might have inspired the Vietnam fantasy was the Brinks Hotel bomb in December 1964. A six-story hotel used by American servicemen in Saigon, South Vietnam, was demolished by a car bomb set by the Viet Cong (South Vietnam Communist soldiers). In the movie, the bomb is aboard a train and the target is the whole city in which corrupt capitalist gangsters and businessmen grow wealthy while the poor of the provinces remain in poverty. That background story is provided by the ‘animated short’ titled Distant Planet and is provided as an extra on the DVD.

This Huey gunship in Vietnam is an Australian air force example.