Space suits and frocks on the box

Space suits and frocks on the box

The movie The Right Stuff, Warner Brothers, 1983, reviewed by Everard Cunion in 2008

The Right Stuff is two stories in sequence. The first is the story of the breaking of the sound barrier by the 24 year-old WWII fighter ace Chuck Yeager in a rocket-propelled airplane in 1947. 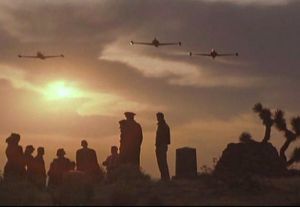 This screenshot is of a missing man formation at the funeral of the pilot of Whiskey Kilo Two Eight.

The movie is faster-paced than the book and its humour does not work quite as well (in my view). However, the action scenes are thoroughly researched and well executed.

Glennis (Chuck Yeager’s wife) ducked under that overhanging branch. Chuck, from whose viewpoint we are chasing Glennis, was knocked off his horse and he ‘dinged’ (broke) a couple of ribs. (The actors who play Chuck and Glennis are genuine horse riders.) Yeager kept it quiet from the air force brass and, with the aid of a sawn off broom handle, he flew the X-1 faster than sound the next day.

There’s plenty of vintage hardware in this movie. Here, Glennis drives Chuck to the flight line for the world’s first ever supersonic flight.

Throughout the movie, real film from the time (mostly black and white) is inter-cut with action using models and ground scenes with the actors. It is seamlessly done. 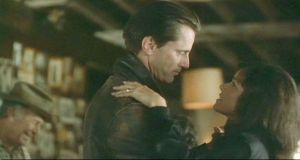 Chuck (Sam Shepard) and Glennis (Barbara Hershey) at Pancho Barnes’ place, the Happy Bottom Riding Club. (Don’t ask.) If you are an aviation enthusiast or historian and you think you recognise Fred the barman (just visible in this still) you are right. It was filmed in about 1982. 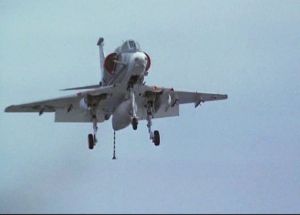 The action scenes are not as extraordinary as those in Top Gun, but they are more telling of the day to day danger of aviation and rocketry. 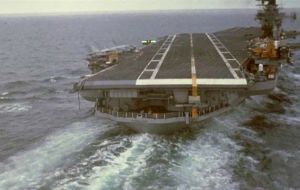 This was a skillet!—a frying pan!—a short order grill!—not gray but black, smeared with skid marks from one end to the other and glistening with pools of hydraulic fluid and the occasional jet-fuel slick, all of it still hot, sticky, greasy, runny, virulent from God knows what traumas—still ablaze!—consumed in detonations, explosions, flames, combustion, roars, shrieks, whines, blasts, horrible shudders, fracturing impacts, as little men in screaming red and yellow and purple and green shirts with black Mickey Mouse helmets over their ears skittered about on the surface as if for their very lives (you’ve said it now!), hooking fighter planes onto the catapult shuttles so that they can explode their afterburners and be slung off the deck in a red-mad fury with a kaboom! that pounds through the entire deck—a procedure that seems absolutely controlled, orderly, sublime, however, compared with what he is about to watch as aircraft return to the ship for what is known in the engineering stoicisms of the military as “recovery and arrest.”

Conrad didn’t like needles in the first place, and this one looked like a monster. Hannh?—they drove the needle into the big muscle at the base of his thumb. It hurt like a bastard. Conrad looked up as if to say, “What the hell’s going on?” But they weren’t even looking at him.

Pete Conrad (he commanded the second moon landing) although a central character in Wolfe’s book, does not feature in the movie. The needle scene is given to Al Shepard (Smilin’ Al of the Cape).

The actresses chosen to play the men’s wives are ordinary-looking girls. That is deliberate. 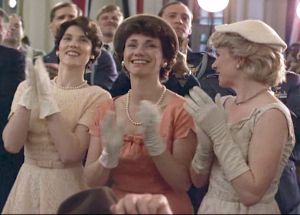 Frocks on the box

However, by dolling them up in 1950s-60s clothes, pearls, hair styles, and high heels, even ordinary girls turn into centrefold material. (A matter of taste, I suppose.) 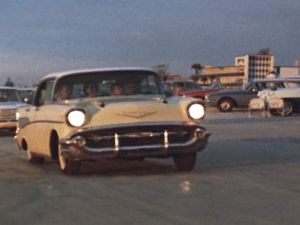 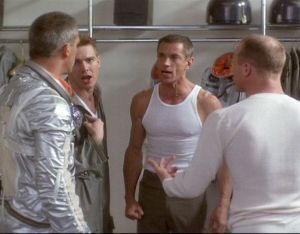 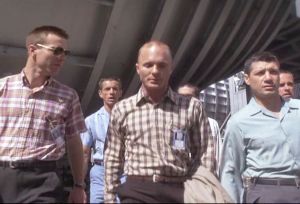 America's first man in space prepares to board

America’s first man in space prepares to board. His identity is not revealed until the last minute. Everyone assumes it is John Glenn, the most media-friendly of the seven in those conservative times. 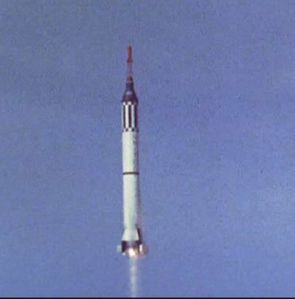 I have a 1/48th scale model of a Redstone-Mercury. It is not very large.

Looking up at the side of the helicopter from below

This photo shows Gus’s view of the helicopter as it attempts to snag the sinking Mercury space craft—while Gus is waving frantically to indicate that he is on the point of drowning.

In flight test, if you did something stupid, if you destroyed a major prototype through some lame-brain mistake such as hitting the wrong button–you were through! You’d be lucky to end up in Flight Engineering. 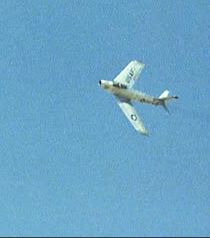 While Chuck and Glennis stand in the smoking ruins of Pancho’s Happy Bottom Riding Club, an F-86 carves a steep three-sixty in the sky. (I wonder if it is the same one I saw fly past offshore Bournemouth beach in the late summer of 1992.) 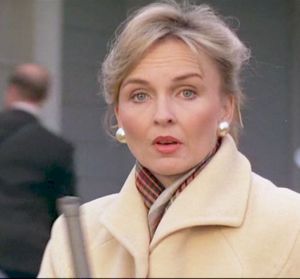 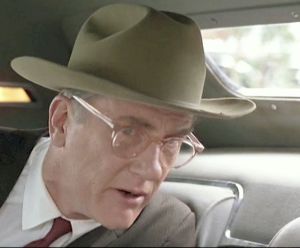 It does not really show in this still frame, but this guy is so much like the real Johnson!

This one is writing down Vice-President Johnson’s ranting, but she is about to be rescued by a guy in a suit who opens the car door.

Cooper was the capcom in Australia during Glenn’s flight. The film ties in the ‘fireflies’ surrounding the capsule, as described by Glenn, with the flying embers rising from the aborigines’ camp fire.

And then he would turn to one of the wives, whose hands were so full of cow meat she couldn’t budge, and he would bend down and turn on a huge Karo-syrup grin, to show his deference to the ladies, and say in a suddenly huge voice that would make the poor startled woman drop the reeking maroon all over her lap: “Hi, there, little lady! Just damned glad to see you too!”

The air conditioning hit them like a wall. Everybody’s bone marrow congealed. It made you feel like your teeth were loose.

The Houston Coliseum scene is inter-cut with Yeager’s fateful flight in the rocket-assisted NF-104 (actually a normal F-104 in the movie).

Pilots were already beginning to crunch it with the F-104 simply because the engine flamed out and they fell to the ground with about as much glide as a set of car keys. But Yeager loved the damned ship. It went like a bat. As the commandant of ARPS, he seized the opportunity to test the NF-104 as if it had his name on it.

The Carpenters; Rene (Susan Kase) and Scott (Charles Frank). Scott Carpenter was the only one of the Mercury 7 who was not a test pilot. He flew PBY Catalina flying boats in World War II.

Yeager, his helmet on fire, plummets. This is a real skydiving scene.

Righteous stuff, my review of the movie Toward the Unknown, 1956, filmed largely at Edwards Air Force Base

Saving Major Tom, my review of the 1967 James Bond movie You Only Live Twice, which includes some real rocket launches and special effects space flight

Smilin’ Al, of the Cape—my review of Light This Candle, The Life and Times of Alan Shepard, America’s First Spaceman, by Neal Thompson, 2004