The movie Toward the Unknown, Warner Brothers, 1956, reviewed by Everard Cunion in August 2019

This 1956 film about the dawn of supersonic flight was filmed on location at Edwards Air Force Base and stars William Holden as a test pilot.

Plastic modelers like me sometimes try too hard to correct for poorly fitting parts. Look at those engine nacelles in reality!

Climbing out from Edwards Air Force Base 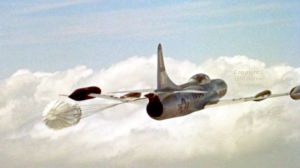 I find Lloyd Nolan’s performance (and that of the script writer of his lines) fascinating. The way he thinks aloud when making hard decisions about people’s futures, with no embarrassment or difficulty in expressing his opinions, even when he changes his mind. The Bill Banner character is said to be based on real life General Albert Boyd.

Here’s a gal who likes to be around test pilots.

Walker had built a house in a tract that some inspired developer–inspiration was the choicest item in the real-estate boom of the period–had named White Fence Farms. You had to build a white fence around your house in order to live there. That he did. As for the farm part–here you had yourself a problem, unless you farmed Joshua trees.

Cameras at the ready

The Bell X-2, here attached to its B-50 mother ship, is also a star of this movie.

It includes some good film of the X-2 during its glide tests.

The film quality is not as good as that in The Bridges at Toko-Ri, also starring William Holden. In addition, on the DVD at least, the sound track is at times a fraction out of sync with the film.

“Frankly, Sir, a pilot your age woudn’t have had a chance.”

This movie continues the tradition of ageism in films made during World War 2.

The action, although a bit constructed in places, is enough to make the film worth watching, but it has too much ground-based ‘drama’ for my taste, especially at the beginning. 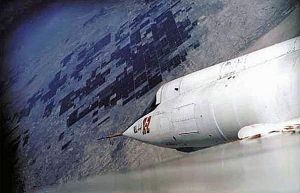 Nonetheless, it has some unrivaled film of experimental aircraft of the time such as the Bell X-2. It is a valuable resource for the airplane modeler or artist.

A ridge too far, my review of the 1955 movie The Bridges at Toko-Ri, also starring William Holden and Charles McGraw as pilots

Whisky Kilo Two Eight tells all, my review of the book Trailblazers, Test Pilots in Action by Christopher Hounsfield, 2008

Space suits and frocks on the box, my review of the movie The Right Stuff, 1983