“I told Neil to look around and not to step out if it didn’t look good. He said he wouldn’t.”

This is a sub-page of T minus 15 seconds, guidance is internal, my review of First Man, Universal Pictures, 2018. My words here potentially constitute a plot spoiler, although I have attempted to avoid giving too much away. Let me quote from science fiction…

“Look here, and here, at the seams. They are stiff with age. They could burst under internal pressure and leak air, and then whoever wears this suit may die in space. And it is I who must wear it…”

Before Giles could say anything more the Engineer was rocked by loud and continuous laughter.

Neil Armstrong and Muffie in 1959 (No larger image available)

Harrison and Dickson’s novel features a race of space-faring beings whose religion considers dying in space to be the ultimate honour, but only after they have done their utmost to save themselves and their ship. Like all such stories, its aliens act as lenses by which we can more clearly see ourselves.

The external view of the crew boarding Gemini 8 in First Man is followed immediately by an effective point-of-view sequence as Armstrong squeezes into his ejection seat. When the hatch is closed over his head, a sound effect reminiscent of that in the film’s depiction of an earlier tragedy accompanies a momentary darkness. It is an element of the underlying psychological theme of this film.

When Armstrong and Aldrin are in their space suits on the moon, the film switches a couple of times between that airless and lifeless grey landscape with its black sky to a sunlit forested riverside, green and breezy; a scene from Armstrong’s past. The contrast could not be greater. James Hansen’s book includes a small black and white photo (one that survived the burning down of the Armstrong family home) on which that scene is based.

More than that, the black sky, grey moon, and white space suits are augmented by amber: The crumpled Mylar that covers parts of the lunar module is gold in color and the glossy outer visors of the astronauts’ helmets were coated in a microscopic layer of gold that lent a yellow hue to what is reflected in them. The result is that the moon scenes have not just a vintage black-and-white photographic quality to them, but moreover appear sepia, analogous to the tanning caused by chemical decomposition of an old photographic film print. Armstrong’s stay on the moon was, after all, short and soon just a memory — a memory in grey and gold. Yet his (surmised) recollection of the sunlit forested riverside, green and breezy, in full color, is more real despite being farther in his past. Is that not the way we view the people and events most important to us? 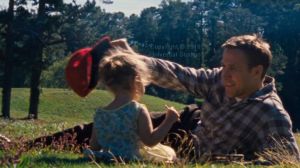 We cross oceans to find those we love, even those who are forever beyond our reach. Is a quarter of a million miles of space so far to travel in such a quest?

The book goes beyond the film in time, describing the unassuming astronaut’s struggle with celebrity until he died at age 82. Its last paragraph describes an event when Armstrong was aged 71. It reads as follows:

Crawling into his lap and straightening her skirt, the child opened the book and began to read. She was clearly proud to be the one who got to tell this gentleman, such a good friend of her grandpa’s, the story of the First Man on the Moon.