Modern girl of 29 with a flair for vintage

This is my review of the Lakeshore Entertainment DVD. 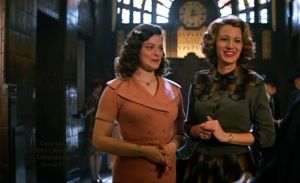 The title of this film can be interpreted in two ways. Firstly, as a question: How old is Adaline? It is a question that she spends her very long life having to dodge. It can also mean the age of Adeline, that is, the entire 20th century. The film makers went to some lengths to recreate the fashion, décor, modes of speech, colours, and even architecture of the different periods. The viewpoint character, Adaline Bowman (played by Blake Lively) and the other actors (including Harrison Ford) carry it off convincingly, in my view.

Passing this location in a taxi cab triggers a memory…

…In the 1960s on that same bench, this guy waited in vain for his girl.

The guy sitting on the green bench is a medical student who changed to astronomy, in which career he discovered a comet that he named after his lost love.

Using Bowman as the surname of a character in a sci-fi movie (minimal though the sci-fi element is) might imply relatedness to David Bowman of 2001 a Space Odyssey (1968) and Commander Kate Bowman in Red Planet (2000). However, although it is based on a science-fiction scenario, the story merely uses the events concerned in that as a mechanism to enable us to traverse an entire century as experienced by a 29-year-old woman.

The streets of San, er, Toronto. Everything is filmed in Toronto nowadays.

The film is grounded in the present (it was released in 2015) and the past is shown as Adaline’s memories triggered variously by seeing old photographs, movie newsreels, or passing a memorable place in a taxi cab. In addition, at the start and near the end, an explanatory narrative explains the sci-fi element on which the plot rests.

Some of the backing music, such as when Adaline views early film of San Francisco, resembles that in Blade Runner (1982) where the Harrison Ford character looks up photos to discover the past, with which he finds he is more familiar than he should be. That parallel in the two stories is undoubtedly deliberate.

Adaline’s car won’t start, but an American student in England just happens to cycle by.

This actor was chosen because he specialises in mimicking the young Harrison Ford. Here he is in England in the 1960s.

Apart from its slowness in parts (see under Criticisms) this film is well made. I particularly like the way the retired astronomer, when he notices evidence that Adaline is not quite who she claims to be, puts his suspicions on hold while he first checks his old photos rather than relying solely on his memory. Only scientists do that! (Everyone else just assumes that their memories are correct.)

There are several accompanying documentaries on the DVD about how they made the film. The research and the way Adaline incorporates vintage accessories from her extensive collection with contemporary fashion is really interesting — if you are interested in such things. If you are not, I think it unlikely that you will find much of value in this film.

The retired astronomer has just found an old photographic print in his shed that proves Adealine’s identity.

I am still waiting for Ellis, the awful pushy guy in a suit, to get his come-uppance. Adaline’s attraction to him is never explained, as far as I can see. (My minister of propaganda would not let this film pass unless Ellis was shown flying a hang glider, riding off-road bikes, or doing some other thing that might qualify him to gain the affection of the beautiful, intelligent, and worldly-wise Adaline.)

The film drags in places. Basic mistakes such as showing us the photos of her dog in an album — not once, but several times, and several pages of them! In those places it is like a student film; lacking judgement. Fortunately, it picks up pace just over half way through when the Harrison Ford character recognises Adaline.

A lot of time is wasted on Ellis telling a joke to Adaline that is too USA-specific for a world-wide audience. (In other words, I had no idea what it was about.) Yet, in a game of Trivial Pursuit,* only Adaline provides the answer to a question about Albert Einstein being offered the presidency of Israel, which is surely common knowledge, and certain to be known by an astronomer physicist!

* Here’s another trivial connection: In an early 1980s television advert for the board game Trivial Pursuit, a bunch of Russian generals play the game and the oldest among them, with the craggiest face and bushiest eyebrows, becomes annoyed. He thumps the table with his fist. “Enough of this nonsense! Back to the Star Wars question.” (Star Wars was the nickname of the U.S. space-based Strategic Defense Initiative.) He reads from the card he is already holding. “Who is Luke Skywalker’s father?” The generals then return to discussing the 1977 film that made Harrison Ford famous.

The Adaline plot hinges on a large coincidence, even given that Adaline has lived for a century. Ellis being the son of an astronomer who knew Adaline is just too much.

In contrast to the meticulousness with which they recreated the look of each period through which Adaline lives, the scientific and sci-fi elements are treated almost with contempt. The comet, while visually impressive, is like a meteor in an episode of Fireball XL5. It is nothing like a comet. And a defibrillator does not do what they show it doing.

Not a criticism of the movie itself, but, as is the case with some DVDs, the image is too dark, losing a lot of detail, at least when viewed on an older computer.

If you are partial to the history of North America and you are bewitched by beautiful women wearing period costumes in elegant surroundings, it might be well worth enduring some of the tedium unavoidable in watching this film. The acting is faultless, in my view.

I feel that this dialog between the retired astronomer and his son is rather good:

“Do you love her?”
“Yes.”
“How do you know?”
“Because nothing makes sense without her.”

The man who loved women—my overview of the movie The Man Who Loved Women by François Truffaut, 1977