A ridge too far

Home (contents) → Movie reviews and overviews → A ridge too far

A ridge too far

Describing the fictional Admiral George Tarrant in his 1953 novel The Bridges at Toko-Ri, James A. Michener wrote:

He was known through the navy as George the Tyrant, and any aviator who wanted to fetch a big laugh would grab a saucer in his left hand, a coffee cup in his right, lean back in his chair and survey the audience sourly, snorting, “Rubbish.” Then the mimic would stare piercingly at some one pilot, jab the coffee cup at him and growl, “You, son. What do you think?”

The movie The Bridges at Toko Ri, Paramount, 1954, reviewed by Everard Cunion in January 2014

A lawyer from Colorado, having been a pilot during World War 2, Lt. Brubaker, played by William Holden, is recalled to the US Navy. He is on an aircraft carrier with Task Force 77 off the coast of Korea in November 1952. This movie is based on a novel by James Michener.

Filmed shortly after the end of the war in Korea, the film contains some of the most scenic flying photography I have ever seen and, with the aid of amazingly realistic models, some of the most realistic action woven seamlessly into film of the real thing.

Ditching in the freezing ocean near Korea in the 1950s was fraught. If a swimmer had to jump in to attach you to the hoist, he had to be rescued by a second helicopter because the Dragonfly had no means of winching up a second person. That second helicopter, which had better not malfunction, needs to be on the scene quickly enough so the swimmer’s hands are still working well enough to get into the hoist. Usually there was no third helicopter.

(For a true story about helicopter rescue at sea, see my digression farther down this page.) 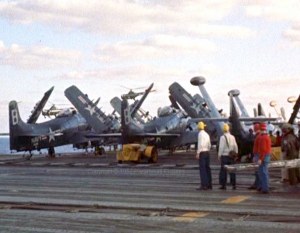 The two Dragonflies return, here partly obscured by the folded wings of Skyraiders and Panthers.

While the sleek jet-powered Grumman F9F Panther was retired after the war in Korea, the rugged piston engined, propeller driven Douglas A-1 (originally AD) Skyraider, which first flew at the end of the Second World War, continued in service to provide air cover during rescues of downed airmen in Vietnam. 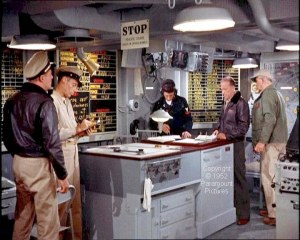 A Panther has flamed out and, aboard the aircraft carrier, Admiral Tarrant (played by Fredric March, here in green bomber jacket and tan baseball cap) listens to the radio calls.

This Panther, possibly with a qualified man in the cockpit instead of actor Holden, is on an elevator rising to the flight deck.

As it nears the camera, Holden is revealed strapped into the ejector seat. If you replay it slowly, you can see the cut, but it is almost seamless. The whole film is extraordinarily well made.

The flight deck action is at least as well filmed as that in Top Gun 30 years later (and 30 years ago as I write this).

Kimiko is one of several good-looking women in the film.

The Air-to-air filming is second to none. 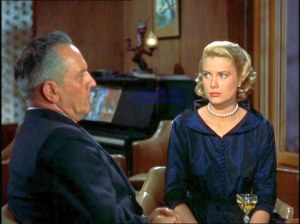 Tarrant explains to Nancy she must understand the risks to which her husband is subject. 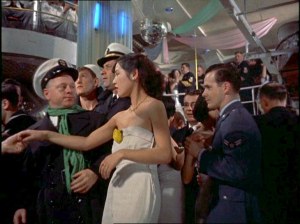 Mike needs Brubaker’s assistance in persuading Kimiko to end her wayward ways and stay with him.

In one scene, CAG Lee has a major disagreement with Tarrant.

Much of the air-to-air filming takes advantage of slanting evening sunlight. 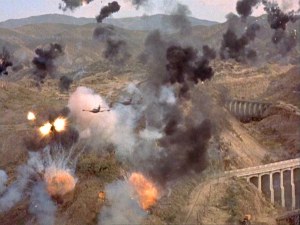 The battle scenes, actual flying combined with scale model action, compete well with modern effects. Additionally, according to Wikipedia, some of it is film from actual combat operations.

Communist troops reach the crash site before the rescue helo and they search for the pilot.

The helicopter has landed but is unserviceable. Fourney and Brubaker are for the moment alone in a ditch a mile from the coast. However, those propeller-driven A-1s that were parked on the deck earlier have launched and are inbound.

The helicopter sound effects are not realistic. Also, when rounds fired by Communist troops strike the edge of a muddy ditch, the sound of a ricochet is used nearly every time. Bullets don’t bounce off mud. Only aircraft nerds will notice, but the movie having been filmed after the war, while the Grumman Panthers on the deck of the aircraft carrier are dark blue (as in the war) at least some of the McDonnell Banshees are in natural metal finish, whereas during the war they were dark blue too. 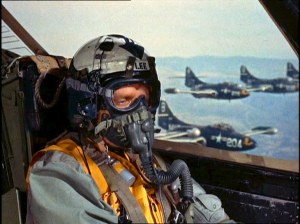 The necessarily constructed in-cockpit views sometimes do not look quite right because of the angles.

Tarrant: “Where do we get such men?”

If you are ever asked what the best aviation movie of all time is and you answer anything other than The Bridges at Toko-Ri, you are incorrect.

One evening in about 1985 the Eighteen Plus group to which I belonged (not to be confused with the Club 18-30 holiday outfit) we were given a presentation by a Royal Navy rescue helicopter crew. (The venue was an upstairs meeting room of a public house in Christchurch, Dorset, England.) First, they unrolled a rubber dinghy and activated a gas bottle that inflated it. Those of us in the front row of chairs crashed backwards in our haste to avoid being overwhelmed by the yellow rubber monster rushing at us. A slide-show followed. The helicopter pilot provided the narrative while another crewman, who had an award for bravery for rescuing musicians of the pop group Duran Duran from an upturned racing sailboat, operated the projector.

The first of the transparencies, colour cartoons, depicted two men in a raft beside a ditched airplane with its tail sticking out of the ocean. The next slide showed one of the men in the life raft firing a flare, which arced towards an approaching helicopter. “Don’t aim the flare at the rescue aircraft,” said the narrator. “Aim it in front, at right angles to its course. That way we will see a long smoke trail instead of just a tiny red dot. And…” (the slide changed) “you won’t risk shooting down the rescue aircraft.” The new cartoon showed six men, including the original two, all sitting in a large raft. As well as the original aircraft’s tail poking up out of the water, the tail of the rescue helicopter protruded upwards out of the sea. Above the horizon, a second rescue helicopter approached.

Righteous stuff, my review of the movie Toward the Unknown, Warner Brothers, 1956, also starring William Holden and Charles McGraw as pilots In this Wikimedia Commons photo, Neil Armstrong is flying the Panther farthest from the camera.

11 Responses to A ridge too far