The film was made when the ideal male was tall and thin (by modern standards) and embodied what were once considered the manly virtues of sharp eyesight, quick reflexes, hand-eye coordination, speed, strength, and intelligence (of the ‘technical’ kind, meaning an innate understanding of the physical world).

It was before the ‘Dallas effect’ (referring to the later television series) whereby women suddenly, as if controlled by Mars (or possibly Venus) decided that the ideal man is an overweight geezer in a suit who ‘kicks ass’. (What caused that sudden change? Is the theory of evolution by natural selection wrong?)

I mention it because many of the Thatcher/Reagan ‘generation’ (that is, those who subscribe to that culture) are likely to be baffled by the portrayal of women being attracted to action sportsmen such as motorcycle racers.

The situation is muddied further by the other hero of the story, Halsy Knox (Robert Redford) being devious — normally a characteristic of men in suits rather than men of action. However, this film was made long before the 1980s reaction, so it could hardly be expected to conform to 1980s stereotypes.

I gained an insight into why women are apparently taken in by people who pretend to be better than they are while among a crowd some years ago. I was at an air show when, near a parked CH-47 Chinook, I overheard a boy ask his father what kind of helicopter it was. (Both his parents were present.) “Sea King” was his father’s immediate reply. Why could he not admit to not knowing the answer, especially as it is so easy for his wife (and said son, a few years hence) to find out he was pretending to know what he did not?

The answer is that working class culture, in Britain at least, does not require men to be either knowledgeable or honest. It requires them to appear to be forceful and in charge (booming voice, “Sea King”). These women view honest people as lacking social skills. (In that, they are arguably correct.) They evaluate men not on their ‘real’ abilities, but on their ability to deceive effectively, if only temporarily. (It might be that in the recent natural history of some lineages of the human race, temporary was all there was.) As evolutionary psychologists frequently point out, in a society where a certain type of male is widely seen to be popular with women, younger women instinctively sense that, if their own children are to pass on their genes in turn, they had better have that kind of father.

In such a society, women who are instinctively attracted to the tall, strong, and brave (as presumably the most attractive women are) are then pulled by those competing instincts in opposite directions. It strikes me that the sexual contract is a way of resolving that conflict by placing their eggs in two (or more) genetic baskets, so to speak. If the ‘sexual contract’ is indeed a defining characteristic of recent human evolution, it surely follows that the group conflict among males between the dodgy geezers and the men of action is not a 1980s phenomenon. Maybe it has swung one way, then the other, throughout history, in a classic generation-by-generation rock-paper-vertical-rolling-scissors game (to coin a phrase).

Early in the story, Fauss and Knox collide and Fauss sustains a minor leg fracture. Fauss’s father is convinced that Knox collided on purpose. Fauss is convinced that Knox did not crash into him deliberately. Even if it were not fiction, in which it can be stated with certainty that there is no fact of the matter, it seems to me that in a similar real situation there is still often no fact of the matter! (Guennady Moisseev’s team-mate running into Czech rider Jaroslav Falta to assure a Soviet motocross victory in 1974 is, arguably, an exception.)

The mind is not a digital computer. It is possible to believe two (or more) mutually exclusive things. It seems to me reasonable to assume that both Pop Fauss and Little Fauss are correct. Yes, Knox deliberately rode into Fauss and, paradoxically, it was also an unavoidable accident.

Our minds are interwoven ‘programs’ of action unknown to us while consciousness is a retrospective narrative (always subject to unconscious change) that ‘explains’ our actions in terms acceptable to others and to ourselves. (Although the mind is not a digital computer, the program analogy is useful.) In 1930s Russia, Italy, or Germany, you did it for Stalin, for Mussolini, or for the Fuhrer. In 1940s Japan you died for the emperor. In 1950s Britain, France, or the USA, you did it for ‘the country’, while in 1970s Britain you did it to further your chosen version of the class struggle. And in 1984 Britain and the USA, you did it to benefit only yourself and your immediate family because “There is no such thing as society.”

Conspicuously absent from all those programs of mass propaganda is the aim of improving the genetic quality of the race (although some of those regimes claimed to do that while doing the opposite). Improving genetic quality is what action sports help to achieve – but only if they are equally available to rich and poor.

The ‘sexual contract’ has been said by some evolutionary psychologists to characterise humanity. The woman chooses a highly ‘fit’ male to father her first child. (This is ‘fit’ in the value-free and rather circular sense used by biologists.) That male then moves on, whereupon a man of lower social rank brings up said offspring in addition to the woman’s subsequent offspring, of which he is the genetic father. DNA analysis of populations, which began in the 1980s, confirmed the theory, although, as far as I am aware, it did not at that time resolve who the males are (statistically or otherwise). 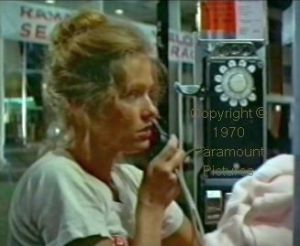 That contrasts with earlier assumptions, based on census results, in which the male ‘head of the household’ was also assumed to be the genetic father of all the children in the household.

The story of Little Fauss and Big Halsy is a microcosm of that model of late human evolution, but with a twist (or two). What is more, the film was made not only before the advent of DNA analysis, but before even Richard Dawkins’ The Selfish Gene was published in 1976.

The first twist is that Fauss falls for one of Knox’s girls, yet, when the opportunity to have her arises nine months or so later, he passes on it. The reason is the same as the cause of the conflict on which the story is based: Fauss regards himself not of lower social rank, but as at least Knox’s equal.

Furthermore, the girl concerned makes a surprising move towards the end of the story. Women were not completely powerless in 1960s USA.

Blank slate syndrome: a critique of an evolutionary psychology talk by Johan Nayar