Virginia and Louise were both made by Abyss Creations of California in 2005 and they time-share the same Realdoll body.

The photo of the car with a hang glider on the top was at the farm house adjoining the landing field for filming the hang gliding sequence in the 2006 North One Television documentary Guys and Dolls. (See my review.) It was shown on Five in Britain on a Monday evening in the summer of 2006 and, with an estimated 1.5 million viewers, it was their most popular show at that time slot ever. They immediately scheduled a repeat, and it was aired again three weeks later. It has been re-broadcast several times since then and also shown via different broadcasters all over the world. 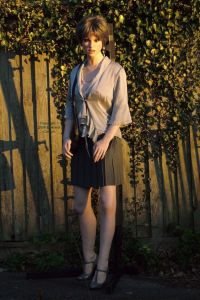 Virginia is headmistress of Stepford-on-Sea Finishing School for Girls

The apparent angle of lean indicated by the shadow of the doll stand is an illusion caused by the fence being titled. 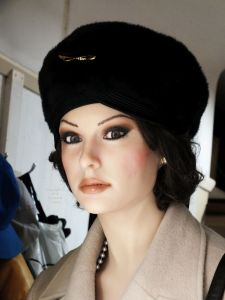 In the hall (back home at Rebecca’s castle)

Virginia is the youngest headmistress in the history of the school and, likely for that reason (it seems to me) she is overly strict.

I took these photos after I glued her mouth closed.

The cat was made by Hansa. 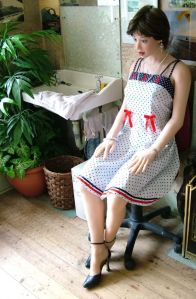 Here, although not apparent, the main joint in her back was broken.

The back joint was a difficult repair, entailing replacement of the back joint. Techniques for such repairs are documented on the doll forums. 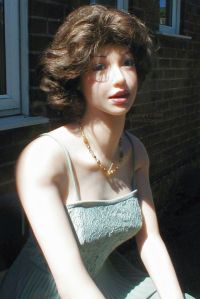 Taken with an early digital camera

Preparing for D-Day at Alektra’s castle in 2013