Cynthia is a Celestine head made in October 2013 by Matt and Bronwen of Sinthetics. She time-shares the same Knighthorse body #1 as Annabelle, Denise, and June. Cynthia is Annabelle and June’s mother. She took a break from her busy life to visit her daughters here in 2013 and she never left. 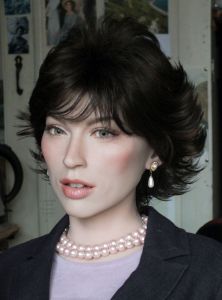 Cynthia was made by Matt and Bronwen in 2013

She is named after Lester Gaba’s mannequin of the 1930s.

[Lester Gaba] created a particularly beautiful mannequin whom he called Cynthia and paraded around New York, taking her to the Opera, the clubs and society events even though it took three men to carry her. She became very popular and was showered with gifts from Cartier and Tiffany. 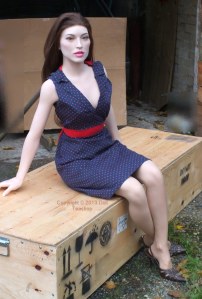 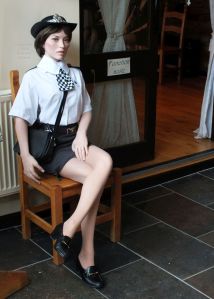 I took these photos of Cynthia as a World War II U.S. Women’s Army Corps PFC (attached to General Headquarters and assigned to the air force) at the ‘Shake and Stir vintage festival’ near Bournemouth in July, 2018.