“He’s got the church and the palace of Westminster on his side. Who have you got?”
“My mum. She thinks I’m a genius.”

— from a dialog in The Sweeney, a popular 1970s UK television series about a fictionalised Metropolitan Police ‘flying squad’

Most of the images on this page are my artistic derivations of contemporary photos.

Looking for a new England

Sky Sports was a hang glider manufacturer based originally near Boston, and then in Ellington, Connecticut, New England, north of New York. (Do not confuse the east coast manufacturer Sky Sports with the similar sounding Sport Kites of California; later renamed Wills Wing.) At least some of their sails were made by Odyssey Sails of Wilton, New Hampshire. The flying in New England is arguably more demanding than in California, where most hang glider manufacturers were based, because of the wind and rain. A bit like where I live in old England, by the sound of it. However, unlike old England, the flying regions of New England are largely tree-covered, with ‘tree slot’ launches and tight landing areas.

While some trained aeronautical engineers made great contributions to early hang glider development, on the whole they did not build better hang gliders than those who were self taught (whose mums doubtless thought they were geniuses). As far as I know, Sky Sports originally relied on designs by hang gliding pioneer Tom Peghiny, whose early work included a ‘cylindrical’ Rogallo wing with highly curved leading edges. His later work included a monoplane with a V-tail, which was nevertheless weight-shift controlled, like conventional Rogallo wings.

Stepping back four years from the 1978 Sirocco… 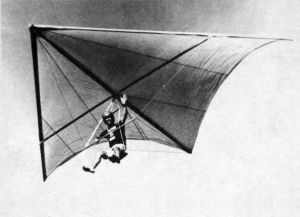 The Bobcat was designed to be easier to fly than their contemporary higher-performance wings.

Tom Peghiny in a Bobcat as it appeared in Ground Skimmer, April 1975

In the first photo, either the bird art had not yet been applied to the sail or it is a different glider from that in subsequent photos. 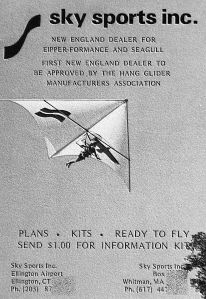 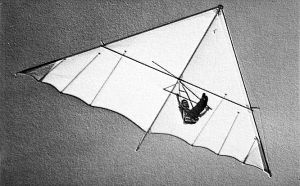 Bobcat 2 in the Sky Sports advert in Ground Skimmer, April 1976

The Bobcat 2 featured three battens each side, each at a different angle, to support the slight roach cut of the sail near the tips.

While Wills Wing in California improved the performance and handling of the Rogallo with the Swallowtail design, Sky Sports on the east coast went in a different direction, the result being the Kestrel. (It has no connection with Kestrel Kites of Dorset, old England.) 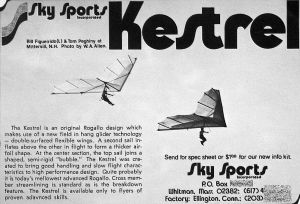 The pilot of the wing on the left is aerodynamicist Bill Figuerido and the other pilot is Tom Peghiny. The original photo is by W.A. Allen. 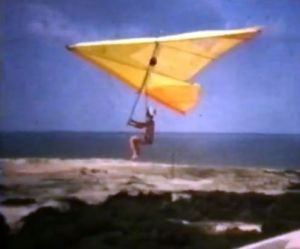 Tom Peghiny in an early Kestrel

Here is a picture in words by Chris Gonzales, who flew a Kestrel B while his Sirocco II (see farther on) was being built:

When I started at Barber’s Hill, it was lush with Kestrel Bs, a string of them slowly advancing in stages up the path on the 200-foot hill. They glided flat and long, landing deep into a far hayfield.

This screenshot from the Pico Peak 1978 competition film is annotated by Chris Gonzales to identify Sky Sports wings set up, presumably, near the landing strip.

Chris says of the Kestrel B, “Amazing glider for its simplicity (three straight metal curtain rod battens per side and a curved nose batten).”

Incidentally, for a newer photo of the Sirocco 1 in the screenshot, see farther on.

Tom Peghiny in a Merlin at Escape Country in April 1976. Photo by Bettina Gray.

Paul Courtney flaring a Merlin on the target at Escape Country in April 1976. Photo by Stephen McCarroll.

Paul Courtney past vertical in a Sky Sports Merlin. Photo by Stephen McCarroll.

The Osprey was a popular intermediate-level wing.

Eventually, Tom Peghiny was joined by another self-taught hang glider designer, Terry Sweeney, an electronics technician (self taught in that too) working in the field of radar jamming electronics for the military. Together, they created the Sirocco, one of the first double-surface flex-wing hang gliders.

Notice the shape of the sail of the Sirocco in the accompanying screenshot from the Francis Freedland documentary film 1978 Pico Peak International Hang Gliding Meet (see my review, linked farther down). The inboard battens were secured in position with cables to the control frame corners and (apparently) to the top of the king post. The sail was thereby kept from applying upward (or in the event of severe misfortune, downward) force on the crosstubes. (Nowadays they build the crosstubes strong enough to take any additional bending forces imparted by the sail.) Those wires arguably also improved the span-wise twist distribution of the wing.

Incidentally, the pilot in the screenshot is flying in a seat harness inside the control frame.

This Sirocco 1 originally belonged to Chris Gonzales’ instructor, Mike McCarron. It is the actual same one in Chris’s annotated screenshot farther up this page.

Double surface wings enclose the cross-tubes between the upper and lower surfaces of the sail, which eliminates the aerodynamic drag of the crosstubes. This photo also shows deflexor cables cluttering the leading edges. They added strength and kept the lanky tubes from distorting out of shape. However, those deflexors also created a lot of drag, increased the cost of manufacture, and increased the time you spent rigging and de-rigging your wing. Modern hang gliders do not have them. Nevertheless, they provided an ability to fine-tune a glider’s handling:

I was able to optimize for steep turns, say 60 degrees, the kind of turn you would use in a strong thermal core. With careful tuning, I could set up up a sweet spot within which the glider really coordinated well in that bank and climbed extraordinarily well.

Sweeney worried about the lack of pitch stability of the standard Rogallo in a dive, as many of us did. According to reports, at zero angle of attack, the sail ‘luffed’ (flapped uselessly) and created no lift to shift your weight relative to, so you were unable to pull out of the dive. (See my page Luff in the time of cholera about that phenomenon.) Given enough height, the drag of the flapping sail would — in theory — pull you out, but we rarely gained enough height for that in those days. In 1973, Sweeney added a strut under the sail near each wingtip, with a cable to the top of the king post that limited the strut’s downward arc about its attachment to the leading edge. In an extreme dive, it acted as an up-elevator. It was a combined dive strut and reflex bridle, as we would understand it today.

The Sirocco II, which was Sweeney’s own project with input from Sky Sports test pilots, had six battens per side, as compared with the original Sirocco’s five per side. The Sirocco II also had a wider nose angle and more area at the tips. Chris Gonzales describes it as a “great design.”

One of the pilots who contributed to the design of the Sirocco II was 1978 US champion and author of a series of technical articles in the magazine, which eventually he turned into reference books, Dennis Pagen. 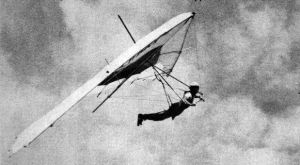 This photo shows the cable from the control frame corner to the inner-most batten, reducing washout at the root.

Bear in mind that the personal computer was still years away. Unless you had links with academia, in which case you might obtain time on a mainframe computer, you either used a slide rule to aid hand-written calculations or you used a programmable calculator to help design your wings. If you were a bit outside the box, you used a Hewlett Packard reverse Polish notation calculator, which did not even have an equals = key!

Sweeney’s hang glider design program, which he used on the Sirocco project, contained 224 steps. However… “We still sort of handle the shapes intuitively — the nose angles and the sweeps, and the anhedral/dihedral tuning, and stuff.”

Nevertheless, hang gliding was (and is) not just a by-product of the space age or of developments in computing. As Chris Gonzales points out: “Of course, hang gliders owed much to sailboat design and technology. The art of sail making and time-tested hardware allowed designs to advance quickly.”

A further use for the computer is in generating airfoils. The Sirocco II exhibits a higher mean camber in the root section in a rearward moving high point away from the root. This again helps prevent tip stalls by evening out the lift distribution.

Boy, things happened fast in those days. They were literally designing faster than the magazine could report on them!

A prominent pilot, who wants to remain anonymous, provided information and contact details of some potential and actual contributors.

Chris Gonzales sent me info and photos by e-mail. In addition, I added more snippets from his subsequent article, Sky Sports Gliders of the Late ’70s, published in the USHPA magazine Hang Gliding & Paragliding, September/October 2017 (linked later on this page).

Sky Sports was originally (in about 1972) based out of Ted Strong’s parachute loft near Boston, according to Dan Chapman writing in Aerie, the Hang Gliding Magazine (an independent east coast oriented publication) May 1976. Sky Sports subsequently moved to Ellington, Connecticut, according to their advert in Hang Gliding, August, 1977.

Skyhook Sailwings, a short history of the early hang glider and powered ultralight manufacturer based in the north of England

Big Blue Sky — The history of modern hang gliding – the first extreme sport! by Bill Liscomb on YouTube. The link starts at 2 minutes and 41 seconds, where Terry Sweeney flies an early biplane hang glider. Narration of that segment is by Bob Trampenau of Seedwings.

For a remarkable photo of the Sky Sports Sirocco, see this Oz Report forum post. On a Windows computer, right-click the partial image and select Open image in new tab or View image (or your browser’s equivalent) from the shortcut menu.

For photos of another artistically painted Sirocco, see this post on hanggliding.org.