This page follows from Paragliding.

The year 2015 started badly with a serious paragliding injury at Monk’s Down.

Ironically, the previous weekend, three club members (including me) acted as volunteer fence marshals at a horse racing event, which raised money for this very helicopter (or, to be more accurate, to go towards replacing it with a more capable one).

A ground ambulance turned up also

On a Saturday in late May 2015, a light and variable wind blew up, and sometimes across (when it blew at all) a tree-topped small ridge in north Dorset, England, called Monk’s Down. According to info I found on the web (not always reliable) it is named after a village clock maker named Monk.

As far as we know, Kylie Minogue (an attractive Australian singer famous in Britain) does not really live in that big house, but we call it Kylie’s house by the following logic…

A country road runs along the top of Monk’s down; a narrow strip separating the grassy slope from the ridge of trees along the top. Very occasionally on a summer’s day, a loose and leisurely gaggle of burly fellows cycles along that road. In the middle of them, also on a bike, is an attractive woman. American singer Madonna has a residence a little way behind Monk’s down.

Madonna and Kylie are approximately the same generation and they are often compared and contrasted.

Between cycles of thermal lift, paragliders descend to soar the ‘cliff’ of trees along the top of the ridge, directly above the road. If they are unable to maintain height there, they fly forward and land on the slope, ready to launch again in the next lift cycle. Such thermic cycles occur at intervals in this kind of weather. (Not quite as regular as clockwork, unfortunately.)

Hang gliders, which land faster than paragliders, are not as well suited to these conditions as are paragliders. 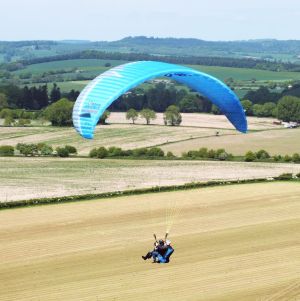 The RAF supplies its paraglider pilots with top equipment all finished in RAF colours.

It was long ago
In the early morning glow
When it all began with Adam and Eve.

— Words from Children of Paradise by Boney M, 1980 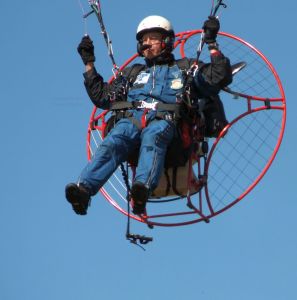 Sean S flew his paramotor from this blue day in early September 2015 at Bell Hill to the coast to see if conditions were any better at Ringstead. 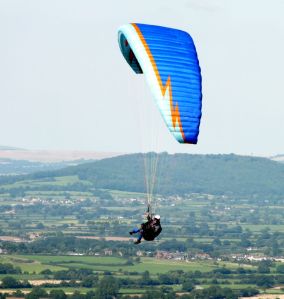 As always in light thermic conditions, paragliders sought out and took advantage of whatever lift was out there.

I managed to photograph one of the new paraglider sail patterns created by former British hang gliding champion Bruce Goldsmith. On this day, I got above the paragliders just by standing on the hill…

While the colour schemes have improved, the naming problem (inherited from hang gliding I fear) persists. This particular example is called Adam. After Adam Ant? The guy I asked about it was adamant that it was named after the Biblical character who made the first paraglider out of interwoven fig leaves to hide his embarrassment about not having any clothes to wear. (Having been educated in UK state schools during the era of science and technology, I am somewhat hazy about such tales.)

Eventually, I launched my hang glider into a breeze so light it barely ruffled the sail and, three minutes later, I landed at the bottom. Would you Adam and Eve it! 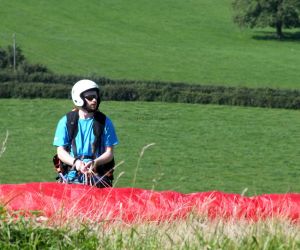 When the Poles talk amongst themselves on the hill, the sound reminds of the 1968 movie The Battle of Britain, which features several scenes involving the Polish squadrons of the RAF. (See Adolf versus Adolph, my review of that film.) 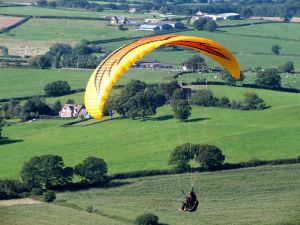 This Firebird is one of the few good-looking paragliders (in my view) that has been around for a while.

Paraglider against the wind in April 2016

It was a familiar story on a Saturday in mid-May 2015 at Monk’s Down. Some paragliders climbed out in thermals while the hang gliders did not do so well. 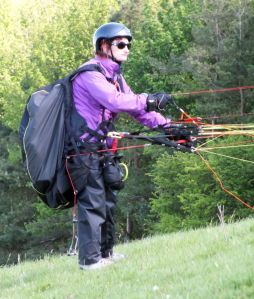 Paraglider pilot preparing to launch at Monk’s Down

Paraglider pilot readying to launch at Monk’s Down

When the wing is overhead (it just hangs there, supported by the lightest breeze) the pilot turns 180 degrees to face into wind and down-slope.

Paraglider launching at Monk’s Down

Two steps and she is airborne!

No doubt about it, paragliding is what hang gliding tried to be, but never was; flight with minimal hassle. Hang gliding is now a specialised activity suited mainly to stronger winds and ‘big air’ (strong lift and its associated turbulence). 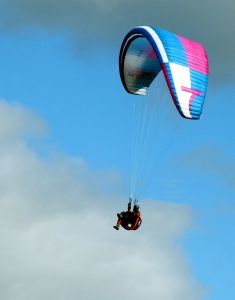 Paraglider at Monk’s Down in October 2016

A light wind day in mid-May 2018 at Bell Hill, north Dorset, England, saw height gains to cloud base by some, while others struggled to avoid going down to the bottom landing fields. Meanwhile, paragliding training was carried out at the west end of the launch slope.