Feel free to make a print of this painting for your own non-commercial use. 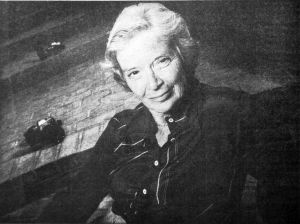 I based this painting on a photo by the movie actress turned hang glider photographer Bettina Gray, who came to Britain and attended the Glen Grant Scottish Open Hang Gliding Championships in the spring of 1977. (Her son is pioneering hang glider pilot Bill Liscomb.)

Art based on Bettina’s photo

I shifted the horizon down to below the batten, which in the original photo is aligned with a feature line near the horizon. Photos of me launching in a Sunspot (see Hang gliding late 1970s and early 1980s) provided additional details of the glider’s structure.

I made up the sail colors, the photo being printed in black and white. However, red and yellow were among the sailcloth colors used by Skyhook Sailwings. 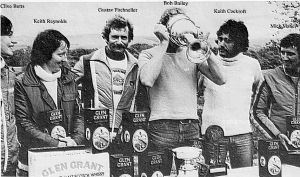 Trophy time. Based on a photo by Bettina Gray.

Keith Cockroft and Skyhook Sailwings chief Len Gabriels were the only competitors at the event flying Sunspots, so the pilot is most likely one of them. Cockroft was killed flying in France in 1994. Gabriels died at age 93 in 2020.

The site was Minto on the Scottish borders, named after the landowner Lord Minto.

Technical: The slight kink in the control frame base tube was caused by its ingenious rigging system that fed each lower side wire into the tube, where it connected to the opposite corner of the control frame. (So the two side flying wires both ran inside the base tube.) The base tube was in two halves, split in the middle, with an insert that plugged one half into the other. When the rigging was de-tensioned and the wires slack, the base tube could be pulled apart and folded, reducing rigging and de-rigging time and also reducing the possibility of not attaching things correctly during glider set-up. I assume the idea was discontinued when it was realized that bending and straightening the critical side flying wires to fold and unfold the tube was a greater risk factor.

Trivia: How many virtual hand-shakes away from movie star Grace Kelly (The Bridges at Toko-Ri, see my review) were the pilots at this competition? Bettina Gray was a bridesmaid at her drama school friend Grace Kelly’s wedding to Prince Rainier III of Monaco in 1956.

I tend to use too dark/strong colors for my landscapes and so I did here despite trying not to.

I applied a light grey wash, which helped. I also over-painted the grey sprayed sky, which contained spots from the spraying. I need to maybe stand the painting upright rather than have it laid flat when spraying so the heavier droplets don’t make it to the canvas.

For more about how I use my computer to assist with painting accuracy, see Process in Painting the Eagle III and Method in Day at the beach.

I need to sort out this mess.

Photographers of early hang gliding on my other web site, Hang Gliding History