This page continues from Painted history of hang glider design part 2. It contains mostly older paintings created during the early 1980s. An exception is the Skyhook Sunspot, which I painted in 2022.

Feel free to create prints of these paintings for your own non-commercial use. 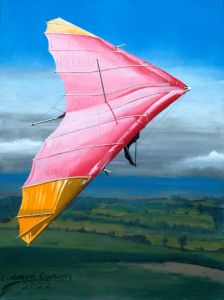 The battens, which were flexible plastic conduit secured with elastic at the trailing edge, slid into pockets that ended inside the leading edge pocket, but stopped short of the leading edge tube. (Nearly there!) They were not aligned exactly chord-wise, but were sort of semi chevron — providing better support for the sail roach with little or no increase in form drag. Like its contemporaries, the Sunspot featured double deflexors — horizontal and vertical — that helped keep the leading edges in shape, but at the cost of complexity and additional drag.

For more about this painting see Skyhook Sunspot, 1977.

For more about the software in which I used this digital painting, see Aviation computer-based training. 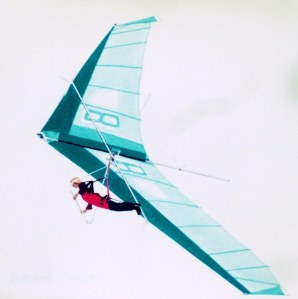 ‘Soaring windows’ of transparent Mylar were built into some sails to improve upwards visibility. That is a problem with hang gliders still (2010). 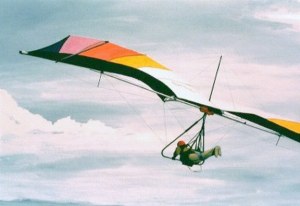 Seagull Ten Meter of about 1978

Seagull retained their curved leading edges into the late 1970s. 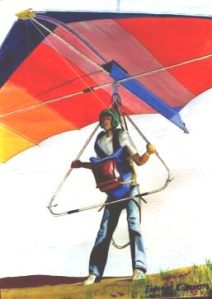 Note the parachute container mounted on the chest of the harness. 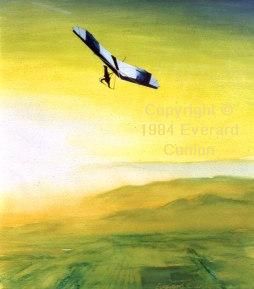 Wills Wing Alpha of about 1978 (no larger image available)

The Debauche Raven of about 1979

The Raven was designed by Jim Debauche and flown in about 1979 by Eileen Debauche. I created this digital painting in 1996. It uses 16 colors and the original was 640 x 480 pixels. Because I based it on a black and white photo, I have no idea whether the colors are correct. 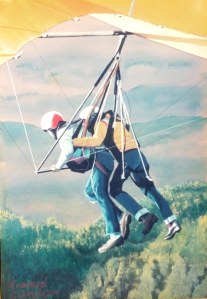 Like most of my hang glider paintings, this is a copy of a small black and white photo in the USHGA magazine Hang Gliding and the independently produced broadsheet Glider Rider. Unless I had further information, I made up the colors. 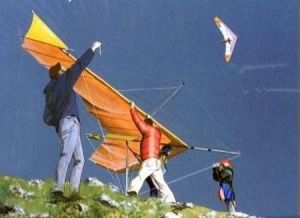 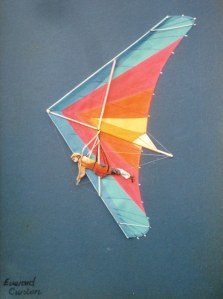 The Electra Flyer Floater was one of a new crop of flexwing which, in 1978 or ’79, omitted the draggy and complex deflexor cables and instead used stronger leading edge tubes. 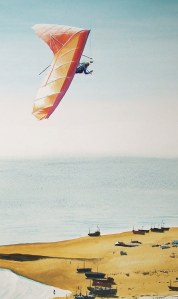 Detail of my painting of an Ultralight Products Comet

The Ultralight Products Comet of 1979, designed by Roy Haggard (who designed the 1974 UP Dragonfly) was the first really successful double-surface hang glider, where a battened undersurface (not visible from this aspect) encloses the crosstubes. Modern flexwing hang gliders fly better, but they look much the same. 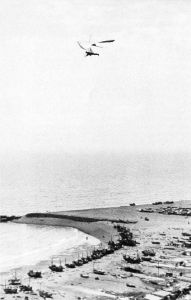 Jim Lee in an Ultralight Products Comet. This is my artistic derivative on the original photo by Ken Gallard. (No larger image available.)

Jim Lee’s Comet had a red sail with black leading edges and under-surface, by the look of contemporary color photos. 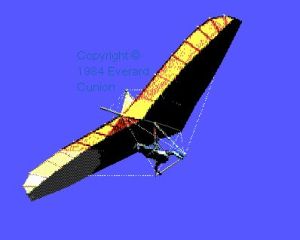 The Southdown Sailwings Lightning, although it first appeared in 1980, was not really a Comet clone. It was a (slightly) different shape, it omitted the stand-up keel pocket, and its king post was raked backwards to form the leading edge of a shark fin. I saw the prototype on Mill Hill, near Shoreham in Sussex, UK, and pointed out to its designer, Ian Grayland, that the nose angles of the sail and the airframe were mismatched. He had not noticed it before, but I believe that he (or his sailmaker, whose name I do not recall at the moment) re-stitched the sail before its next outing.

My original painting, which I no longer have, had a photographic feel to it, partly I think because the paper I used for the blue backdrop was flecked with brown, similar to photographic ‘grain’. I photographed it in 1990 using a Vista-TIPS video camera and digitizing system at work. I scaled the image to 640 by 350 pixels and 16 colours, and I used the result in my 1991 computer-based training program Hang Gliding Ground School. 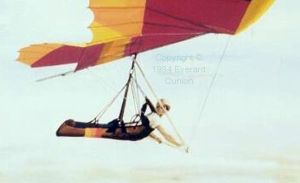 This Comet painting was simply an enlarged copy of a black-and-white magazine photo.

Paintings of other subjects 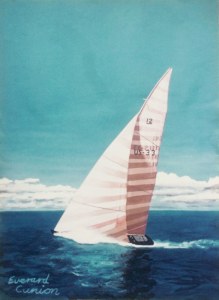 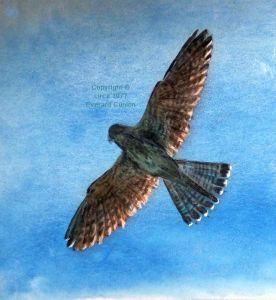 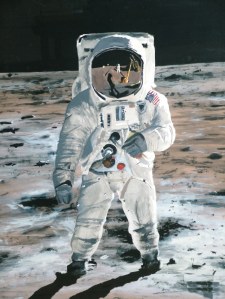