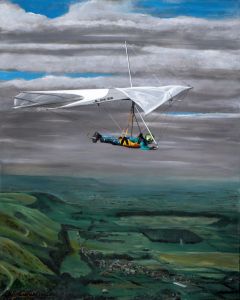 Painting of Brian Wood flying a Wills Wing SST90 at the Devil’s Dyke on the Sussex Downs, England, in early 1977

Brian Wood was the first British hang gliding champion (1974) flying a standard Rogallo. He regained that title in 1977 flying this glider. He still flies (in 2021) but mostly under power in a Flylight Airsports PeaBee powered ultralight.

The painting is based on a black-and-white photo by Don Liddard of Brian Wood flying a Wills Wing Super Swallowtail (SST) at the Devil’s Dyke in early 1977. (See under External links later on this page for that photo.) However, Liddard took the photo from the hillside, presumably just after Brian had launched. To obtain a higher perspective I drew on some grainy black and white photos I took from my hang glider there in 1980, including the following photo: 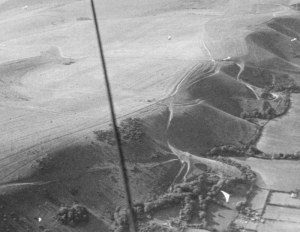 The Devil’s Dyke is a few miles north of Brighton, Sussex, England.

Artistic derivation of the photo in the Simpson harness advert in Ground Skimmer, April 1975

I referred also to color photos that Don Liddard took there the following year showing some of the scenery close to the hill and photos by Liddard, Roger Middleton, and Roly Lewis-Evans for colours and details of Brian’s glider and flying gear. I also referred to photos of the harness (Sport Kites/Wills Wing stirrup harness designed by Chris Price and manufactured by Simpson Safety Equipment of Torrance, California) including this one and a drawing of an early version in the March 1975 edition of Ground Skimmer.

The Wills Wing Swallowtail of 1974-5 (predecessor of the SST) retained the simplicity of the standard Rogallo, yet provided a noticeable improvement in performance with no detriment to handling qualities or safety. The following year they brought out a substantially changed design; the Super Swallowtail, which became as widely copied as the Swallowtail, if not more so.

Notice the absence of an emergency parachute, the widespread adoption of that technology being two years away.

Instructor Malcolm Hawksworth, who in 1975 imported Wills Wing hang gliders into Britain, manufactured Superswallowtail (SST) airframes and used SST sails imported from Wills Wing of California. Hawksworth’s hang gliding school, where Brian Wood was an instructor, was based initially in Brighton, Sussex, just six miles down wind from the Devil’s Dyke — where Don Liddard’s photo was taken and where the painting is set. In 1976 Hawksworth moved his operation to Staffordshire in the west midlands of England.