Stewart Hodgson flying an early Skyhook in Motorcycle News, 1973 or -74

The photo of bike racer Stewart Hodgson flying an early Skyhook in Motorcycle News caught my and others’ attentions. Bear in mind that the American manned space program had effectively ceased three years previously (and Brits like me stood no chance of of worthwhile involvement anyway) and the RAF had cancelled its order for the only modern combat jet, the swing-wing F-111. In addition, while off-road motorcycle competition was the established route to stardom for a young fellow in the time and place that I lived, you had to have enough money to afford a modern bike or at least have the mechanical aptitude to keep an old bike running. A direction-less 18-year-old, I had neither.

Imagine, then, the effect of this photo of a crude kite-shaped fabric flying machine on those of my generation.

The Skyhook IIIA was a ‘standard Rogallo’ hang glider sold in kit form, originating from the industrial north-west of England. (Mine cost £160 in 1974, equivalent to £1,600 in 2018.) Kestrel Kites in nearby Poole was not in the list of manufacturers provided by the National Hang Gliding Association, which I had joined after reading an article on hang gliding in the Reader’s Digest, so I heard of them only after I started flying.

I built the Skyhook in the autumn of 1974 while I studied for a Higher National Diploma in applied physics. The sail was fully made, as was the plastic-coated steel cable rigging. I had to cut the tubing to length, drill holes, and assemble it.

Why I chose Skyhook: Artwork in the brochure from Birdman in Wiltshire was clearly drawn by someone with no clue about the construction of a hang glider. It imparted the impression that Birdman had used the services of a ten-year-old to create it. At the opposite end of the scale was the brochure from Wasp in Surrey. Although only black-and-white, it was printed on glossy paper and contained clear photos (clear by the standards of the time, anyway). Obviously, any money I spent with them was partly being wasted on creating glossy commercial-looking brochures. In contrast to those opposites, the literature from Skyhook in Lancashire consisted of a single A4 sheet of paper with a small photo at top left and clearly typed facts and figures. My decision was instant.

Technical: Like Pacific Gull in California, Skyhook Sailwings of Oldham, Lancashire, was an early adopter of ‘sail clearance towers’ on the ends of the crosstubes, to which the top side wires were attached. They prevented the wires from digging a furrow in the sail. (Alternatives were an enormously tall king post or extending the cross-tubes out beyond the leading edges.) Nowadays the preferred method is to pass the cable through a hole in the sail to a connection slightly inboard of the leading edge tube.

In November 1974 I carried it on my shoulders up the street from home and, thirty minutes later, I arrived at a heather-covered slope where I taught myself to fly it. Not recommended. (It is the same hill we used for many years for off-road biking and — in a north-east wind — others flew radio control gliders there. It is also inside Bournemouth airport controlled airspace!)

Meanwhile, unknown to me, in a village 15 miles away in the farmlands of Dorset, a chap a year younger than I was also building a Skyhook IIIA, but from just plans rather than from a kit. He used a control frame, king post, and upper rigging made by Kestrel Kites of Poole (only 10 miles from me). Our several paths crossed the following year.

An important item not mentioned was how steep the hill had to be.

Powell, one of the early organisers and promoters of hang gliding, refers to the Eipper-Formance manual of 1972, which included instructions for flying the wing.

I am sometimes asked what my first flight felt like. I cannot answer because I do not know how to distinguish between mushing and flying on my first attempts, in which I left the ground briefly with the wing largely stalled — and therefore not really flying — before either it dumped be back onto the slope or I careened into a bush or small tree. My first attempts consisted of running with the wing down a slope that was too shallow. Then I did the same on a steeper slope, but without enough wind… Eventually I discovered that I needed much more airspeed than I had imagined, whereupon I glided down the slope about a metre above the heather for a few seconds before flaring to a stop where the slope became shallower. 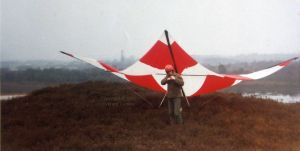 Even by late 1974, not everyone had heard of hang gliders. One fellow, eyeing the skyward pointing king post, said, “Have you tracked any satellites yet?”

My most memorable flight there was when I was alone, strapped in to the seat harness, with the wing parked nose-down below the top of the heather-covered slope. With a cold 20-knot north-east wind bearing down on the sail, I had to haul back on the top of the control frame to get the nose off the ground, then carefully raise it to a position where the sail rattled and banged with the wind passing equally over and under it, shaking the airframe. While maintaining that pitch attitude, I picked up the wing by the control frame, the harness straps alternating between tight and loose as the whole rig jerked about. I took a quick look around — nothing seemed wrong — and I raised the nose a degree or two more, whereupon the sail went taut and it catapulted me skywards as I held on, pulling in for speed and shifting sideways first one way and then the other to counter the turbulence trying to turn me. I was levitated upwards, initially making no forward progress, but fortunately holding station against the wind. I was too overwhelmed to be terrified. (To see such a launch by Chris Price, visit the Playground in the Sky video segment linked father on.) 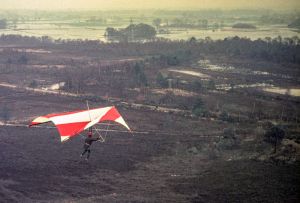 Winter flying was all I knew in 1974 (digitized slide)

The accompanying photo shows the same slope as that over which I made my first flights in 1974, but this photo was taken in February 1975. You might be able to discern the effect of turbulence on the right side of the sail.

At the apogee of that three-minute sub-orbital lob, I took a moment to look around. Immediately below and to the right, the tan and sandstone red quarry that was one of our main motorcycle and bicycle trials riding patches, with the main access track leading off along the top of the hill lost among trees towards home. To the left, the rest of the forested hill with its several saddles, separated from its farthest ridge by the new A338 dual carriageway with its tiny vehicles and, beyond that, the airport’s rectangular yellow school of air traffic control and its runways. Then I looked behind me. New houses had been built on what used to be a series of tree-covered ridges and farther down, partly hidden by trees alongside it, the main road into and out of Christchurch, almost as busy then as it is nowadays. (To see what this area looks like in 2020, see East in On the hill part 2: North, east, and west.)

Meanwhile, in the USA, similar things were happening, but on a grander scale. An example was during the US nationals, held in December 1974 at a hill in the Santa Ana range near Los Angeles, Califirnia:

Soaring conditions were the best ever; the flatlanders loved it as they rose effortlessly like ashes in a column of smoke a thousand feet above Edwards Canyon.

— from a description by Dan Poynter in the USHGA magazine Ground Skimmer, January 1975

About my taking a quick look around before launching: I knew even then to search for the unexpected. On more than one occasion — fortunately when there was little wind — when rigging the Skyhook IIIA, I accidentally caught a fold of sailcloth between the plastic saddle washers where one cross-tube end joins the leading edge. (In retrospect, the rigging procedures of those things were not well designed!) It all looked OK, but when I launched, the glider turned me into the hill and I slewed to a standstill in the forgiving heather. Had such a thing happened on launch into a 20 knot wind, the result would likely have been dire.

This topic continues in Hang gliding 1975.