Kimmeridge is a semi-coastal site that combines sea breeze effects with thermals from the extensive farmland and patches of forest between the hill and the sea. Most of my paragliding training, in 2000, was carried out there.

The club site guide is essential reading, especially if you fly a hang glider there. 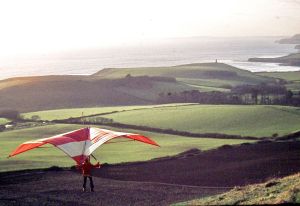 For more photos of Roly and this wing, see My flying 1975.

These photos by Roly, sailmaker for Birdman Sports in Wiltshire, were taken in early 1979.

Roly launching from Kimmeridge in a Birdman Cherokee in 1979

Incidentally, although it might look as though he used the flat-rigged hang glider as a launch trampoline, I am sure that is an optical illusion! 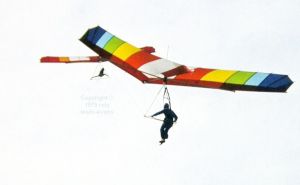 Peter R started hang gliding in 1975. I recall soaring the Kimmeridge in my Skyhook IIIA standard Rogallo and Peter, in a white Hiway standard, was always a little higher than I was. He became the area distributor for Birdman and I recall him flying a Solar Wings Storm at Weymouth white horse in 1980 (when I was flying a Cherokee). Peter subsequently became a top paraglider pilot before transitioning to sailplanes.

— from the lyrics of Supreme by Robbie Williams, 2000

Me in the Magic 4 at Kimmeridge (digitized slide, which could do with cleaning) 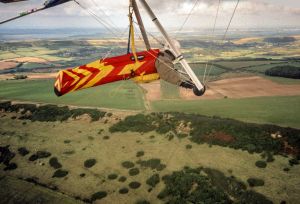 View of a small part of this long ridge

I never fly on my own nowadays and I was disappointed to find no other fliers there when I arrived on this day in September 2000. However, a chap out walking along the ridge stopped to say he used to fly hang gliders. He watched me fly for 45 minutes, that is, until I landed.

View of the flying from my paraglider (digitized slide) 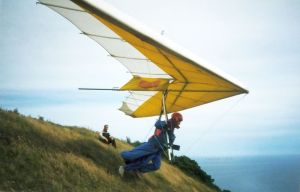 Gary launches in the Magic 3 from the far end 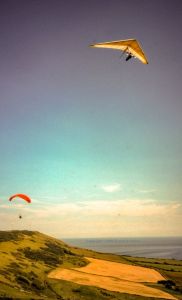 Here, I am setting up for a landing near the mansion below Kimmeridge.

This photo was in August, 2005. The wing is my high-performance Aeros Discus 148.

The photos of my black and white Airborne Sting 3, taken on a light sea breeze day at Kimmeridge in June 2010, are of poor quality. I include them because hang gliding is a rare occurrence at this once popular site. Indeed, access and parking is so problematic there that, by 2015, it is not used much even by paragliders. (Ringstead serves the same wind direction — south west — and it has a public car park on the top of the hill.)

Nearing the west end of the ridge

See My flying 2010 for details of my camera at this time, including how it was attached to the glider.

Notice the people walking along the path behind the stone wall. At this height in a paraglider, you can wave and even say a few words to them. In a hang glider, you are worrying about staying high enough to reach a landing field if you encounter sinking air. 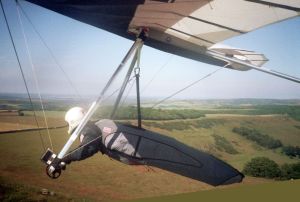 At the south end of the ridge

In the photo taken near the south end of the ridge (the Kingston end) the ridge on the right is at a right-angle to the main ridge, which runs parallel to the fence and style just visible at lower left. 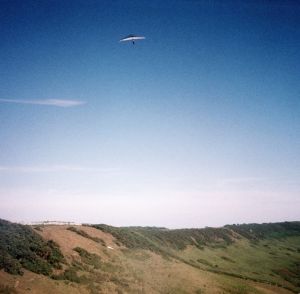 The Clubman, an easy-handling double surface wing, was originally made by Southdown Sailwings, but production was taken over by Avian.