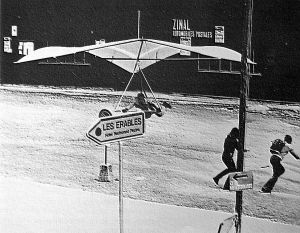 Standard Rogallo landing in a street

Ted Salisbury flying the Dover cliffs, England, in a Wasp 229-B3 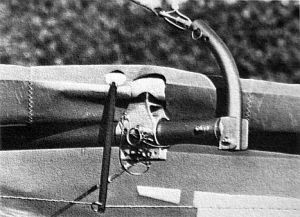 Pacific Gull of San Clemente, California, was an early adopter of ‘sail clearance towers’ on the ends of the crosstubes, to which the top side wires were attached. They prevented the wires from digging a furrow in the sail. (Alternatives were an enormously tall king post or extending the cross-tubes out beyond the leading edges.) Nowadays the preferred method is to pass the cable through a hole in the sail to a connection slightly inboard of the leading edge tube.

On the subject of hardware, the following photo illustrates typical mid-1970s nut-and-bolt type fittings with Nicopress (or Talurit) swaged cables and a pin through a hole in the end of each bolt to prevent the nut coming off. 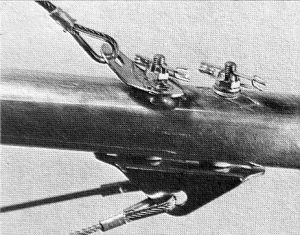 Incidentally, Sailbird should not be confused with contemporary manufacturers Sunbird or Sun Sail… There were so many hang glider manufacturers that it was hard to think up a unique name, although Pliable Moose (Wichita, Kansas) surely succeeded in that respect. (Sailbird was based in Colorado Springs, Sunbird in Canoga Park, California, and Sun Sail in Denver, Colorado.)

Speakers at the Northrop Institute of Technology Ultralight Flight Seminar in January 1974, from the left left:

Mike Riggs in a Seagull V

The Seagull V flex-wing Rogallo used a rudder connected by ropes and pulleys to the pilot’s harness, a technique used also in the Quicksilver ‘semi rigid’ monoplane style hang glider. Together with its excessive dihedral, the rudder combined with weight shift provided turn control. 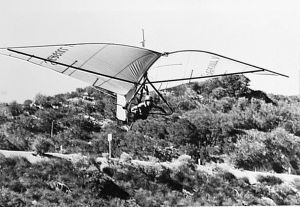 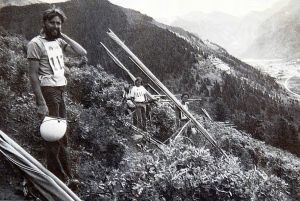 Bob Keeler of Seagull Aircraft at Telluride on July 13th, 1974, by Leroy Grannis

Pilots, gliders, and vehicles at the Sylmar 1974 U.S. nationals by Leroy Grannis

UP is where it’s at

For more of Brock, see the related topics menu Ultralight Products of California and Utah.

For more about Dave Meyers, who took the ocean cliff photo, see farther down this page. 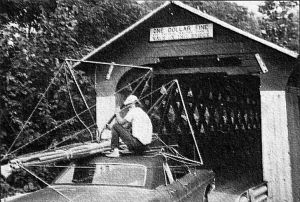 Kitty Hawk Kites, North Carolina, in about 1974. Note the guy with crutches and a leg in a cast!

Of course, hang gliders owed much to sailboat design and technology. The art of sail making and time-tested hardware allowed designs to advance quickly.

The Tweetie, designed and built by Australian Ron Wheeler, was a weight-shift controlled hang glider built of modified sailboat technology. British hang gliding pioneer Miles Handley rigged one at the inaugural meeting of the BHGA, held in December 1974. Handley then started work on a design of similarly ‘aeroplane’ layout, but of radically different geometry and construction.

A photo in the British weekly Motorcycle News of bike racer Stewart Hodgson flying a hang glider caught my (and others’) attention.

Photo by Roger Middleton of Mike Collis launching in a Tweetie at the British championships in August 1975.