By the late 1980s, hang glider development proceeded at a slower pace than during its early days in the 1970s. Meanwhile, photography and, in particular, quality of printing improved markedly during this period.

Art based on the Grouse Mountain and Kodak advert in Hang Gliding, July 1987 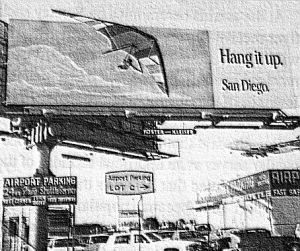 Art based on a photo by Larry Witherspoon of a billboard on Sepulveda Boulevard, Los Angeles International Airport

Larry Witherspoon used a disc camera — in which the film negatives were arranged in a circle rather than a linear strip — to take this snap. During the last half mile walk on my daily journey from my weekday accommodation to work in the centre of London, I passed a similarly large billboard. Its picture was a scenic view with, in the distance against the sky, a hang glider flying. The caption was You can spot a [Whatever] pensioner a mile away.

Art based on the Moyes Mission advert 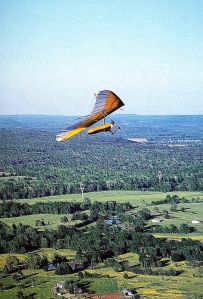 Art based on a photo by Michael Long of Larry Haney flying Haney’s Point, Atkins, Arkansas

Art based on a photo of Doug Rice and Doug Hileman at Sauratown Mountain, North Carolina 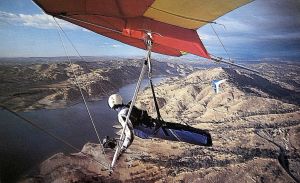 Art based on a Paul Voight photo with Peter Johnson flying alongside him at Mount Utsayantha in the Catskill Mountains, New York state

Art based on a photo by Geoff Phipps of Steve Morris launching at Marina Beach, California

Art based on a photo by Dave Freund of Mitch McAleer at Elsinore, California

Art based on a photo of the UP Comet 3

The major manufacturers were at this time creating hang gliders of ever higher performance, such as the Wills Wing HP-AT, Ultralight Products Axis, and Airwave K-1. However, there was a need for gliders with easier handling, of lighter weight, and with easier rigging processes, yet incorporating the latest design features and technology. Gliders such as the Wills Wing Sport, the Ultralight Products Comet 3, and Pacific Airwave Vision IV (the British-made version was renamed Calypso) filled that need.

Rigid hang glider after landing at Ager in September 1989

The Wills Wing Sport, introduced in August 1986, was the first hang glider (in the USA at least) to be made with an airframe of the stronger 7075 aluminium alloy, which enabled Wills Wing to build it a few pounds lighter. Other manufacturers raised questions concerning that material’s fatigue life and susceptibility to corrosion, but (as far as I know) no such problems were encountered.

See my pages Sport Kites/Wills Wing of California and Testing for stability and structural strength.

Larry Tudor was at this time a distance world record holding pilot. On June 26th 1988, Tudor and Geoff Loyns flew together (each in their own glider) on an out-and-return journey of nearly 200 miles in the Owens Valley, California. (Loyns flew a glider built by the new Australian manufacturer Enterprise Wings.)

Geoff Loyns, from Cardiff, Wales, wears a T-shirt advertising Brains beer. Wales is known for, among other things, its people’s advocacy of education. When I was a student in south Wales in the late 1970s, a large sign at Cardiff railway station proclaimed It’s Brains you want…

In July 1989, Loyns used a rocket-deployed emergency parachute when his glider tucked in the Owens Valley. See the external video link Geoff Loyns talks about his Hang Glider tumble… farther down this page. 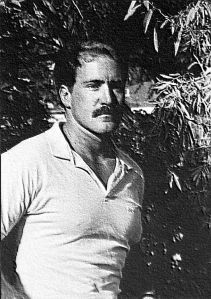 Art based on a photo of Kevin Christopherson

In during 1988 and 1989, the centre of gravity of long distance hang gliding moved from the Owens Valley of California-Nevada to Wyoming. Kevin Christopherson flew a series of flights, usually among several other hang gliders, culminating in a series of cross-country distance world records. His mother and sisters took turns driving chase.

Art based on a photo of Kevin Christopherson at Shirley Rim, near Whiskey Peak, Wyoming

After three hours of shoveling we finally busted through the last drift only to find the wind was out of the north. Wanting to fly, we set out with an ax and hatchet and cleared a north launch.

On his 287 mile record from Whiskey Peak, Wyoming, to Kyle, South Dakota, he had to change his variometer battery, which involved fiddling with small parts while gliding between thermals. After losing height over the Pine Ridge Indian reservation, with no roads below, he caught sight of a golden eagle circling in a thermal…

At this point I was farther along than any man had ever flown in a hang glider, going up in a strong thermal and sharing it with what could only be the spirit of an ancient Indian warrior.

On his later flights, Christopherson flew a British hang glider, the Airwave K-1, as did Welshman Geoff Loyns also by then. (I refuse to call it by its official name Magic Kiss, instead extrapolating backwards from Airwave’s next gliders, the K-2, K-3, K-4, and K-5!)

Across the U.S.A. by hang glider

Distance world records are for single flights. In the summer of 1988, a small team set about a different kind of distance attempt…

Art based on a photo by Skip Brown of
Greg DeWolf of Fly America near Hawk Springs, Wyoming

Greg DeWolf, looking for Cindy Drozda after she landed out of radio contact, encountered a female police officer:

Eventually, the three pilots of Fly America and their ground crew were reunited after one of many adventures on this transcontinental journey in the second half of 1988 and early 1989.

…the last vestige of a fiery sunset gave way to the golden light of a full moon, and the anxiety of the day faded into the serenity of the night.

The Fly America team was supported by people along the route, not all of them hang glider people, who gave their time, money, and goods to the cause.

We then retired to the prettiest, tidiest bed and breakfast establishment this side of Europe and stayed for a few great nights’ sleep and grand breakfasts every morning. The woman who owned the accommodation had a collection of windmill pictures, and boy did we have just the addition for her collection. 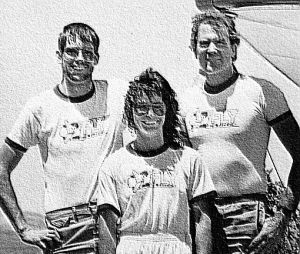 Art based on a photo by Kelvin Jones of Ian Huss, Cindy Drozda, and Greg DeWolf, the pilots of Fly America

We had 30 TV stations arrive on site to tape broadcasts; 40 newspapers obtained interviews and 30 radio stations came out for interviews.

Ian Huss learned some dos and don’ts from that experience…

If you must promote the daredevil image, demand top dollar, so at least you’ll be paid for selling out the rest of us.

On the penultimate leg, DeWolf aimed to land at First Flight Airport on the Outer Banks, North Carolina, near where the Wright brothers flew and from where in 1979 astronaut Neil Armstrong set altitude and climb records in a Learjet. DeWolf had only enough height for a straight-in approach and he would be lucky to clear the trees, then a light aircraft turned onto the runway…

I held my course and was relieved at the quickness of the craft’s acceleration. I relaxed watching the plane cross my path a half mile in front of me. I relaxed, that is, until I saw the second plane start rolling down the runway! Couldn’t anything on this trip be easy?