The cliff run from Ringstead Bay to Lulworth Cove was possible one day in mid July, but the lift was not strong enough to rely on getting back to Ringstead. I had never ventured south of the White Nothe before.

The ocean cave entrance leads to SPECTRE’s new rocket launch complex — relocated from Japan after James Bond and a force of Ninjas blew up the first one. See Saving Major Tom, my review of the 1968 movie You Only Live Twice.

The journey back after I turned round was at a lower height than I was comfortable with. The beach is too narrow for a safe landing (also, it can be reached only by boat) and rotor from the cliffs makes a down-wind dash to land in a field hazardous.

The west face of the ‘step’ cliff, which is where I headed, is just visible to the right of my helmet. Where the bushes/trees end at far right is the start of the emergency bottom landing field.

Strong turbulence is a feature of the take off hill here, at least in spring and mid-summer, even when the lift on the cliffs is perfectly smooth. 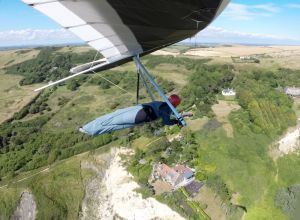 “On the step!” is what the jump-master shouted in preparation for some of my parachute jumps from a Cessna 206. However, here I refer to the west facing ‘step’ cliff at Ringstead. Having gained some height there, I am setting out for the first part of the main cliff.

In this photo on the cover of the July 2015 edition of SkyWings, the UK hang gliding and paragliding magazine, I am turning a complete circle to the left, to head back in the opposite direction. 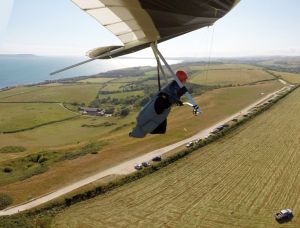 On base leg of my landing approach

The yellow bar on the hilltop directly under me is Gary D’s Avian Amour, a 1990s hang glider which is so quick to rig he had flown and landed while I was still rigging my U-2! Farther along is Sean’s U2 laid flat on the hill near one of the exit gates of the top landing field.

Paraglider in the evening

Conditions on the hill eventually calmed enough for paragliding.

The last Saturday in July, 2015, provided strong coastal soaring conditions. Richard M made an epic ridge run in his high performance rigid hang glider. He appeared overhead at Ringstead and a visiting hang glider pilot, who was keeping tabs on who did what, asked who it was and where it had come from. I had no real idea. (We read about the details online later.)

Art based on the Moyes Xtralite advert in Hang Gliding, July 1995

Jon H launched in a new (secondhand) Moyes Xtralite, an Xtraheavy (to carry) 1990s hang glider with good performance and light handling (for its time). Having experienced the strong turbulence on the Ringstead take-off ridge just a few weeks before, he was being Xtracareful, launching from a steep part of the brow of the hill. Therefore, it was with some concern that we saw him let go of the control bar immediately the wing lifted him off the ground. He explained afterwards that it was not intentional. The glider pitched up so strongly, the bar was pulled out of his grip. Fortunately, the remainder of the flight was uneventful.

Soon, several wings were bright gleams reflecting late afternoon sunlight high above the cliffs in the distance. They included the following:

How did I do? I did not fly. Mainly because I did not feel 100 percent fit. I had symptoms similar to hay fever during the whole of the previous week, but I now believe it was something else. (No idea what.) On this Saturday I had a headache and the sensation that I was not fully up to speed. That, combined with the challenging conditions at take off, caused my decision.

Sometimes, it is best to declare a personal no fly zone.

Sean S flew his paramotor from this blue day in early September at Bell Hill to the coast to see if conditions were any better at Ringstead.

See Children of Paradise in Paragliding continued for more. 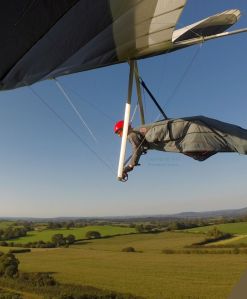 Eventually, I launched my hang glider into a breeze so light it barely ruffled the sail. 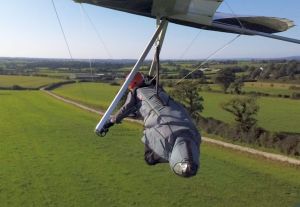 Three minutes later, I landed at the bottom.