This page continues from Hang gliding 2011. 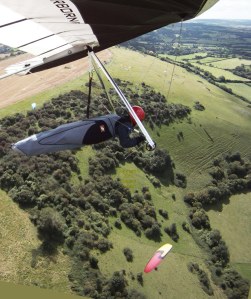 As the photo shows, situation awareness is the name of the game here.

During this flight, the Red Arrows (RAF aerobatic team flying BAe Hawk jet trainers) flew past in front of the hill (at a safe distance). My camera was taking one photo every minute, but it did not acquire them. However, while driving home, the Avro Lancaster four-engine heavy bomber crossed at low level in front of me in a turn. It was like The Dam Busters, but in color. It then crossed in the other direction on final to RAF Hurn (Bournemouth International Airport).

In contrast to 2011, the summer of 2012 provided weekend fliers like me with some of the poorest flying conditions in recent years. (Luckily, I was on holiday on Friday, August 31st.) As always, the ability of the paraglider to more rapidly get into the air when conditions are right resulted in their achieving the lion’s share of free-flight cross countries. An exception was Neville in his rigid hang glider, who flew from Westbury to Bell Hill where he turned round and made it back as far as Shaftesbury. (His appearance over Bell Hill was while I was flying, but again none of my photos caught him.)

Saturday September 15th, 2012: Britain’s Torrey Pines (Ringstead) was open for business again after the airspace ban for the Weymouth (water sports) Olympics. Lots of paragliders (I counted 14 in the air at one point) and four or five rigid hang gliders were present; I had the only flexwing hang glider there. 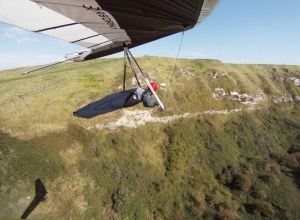 Too low for comfort

I do not recommend flying in this direction at Ringstead with this insufficient height because wind and lift at the cliff can be completely different from conditions at the hill. I suspect that such anomalies are caused by an atmospheric wave effect from Portland Island directly up-wind. (See Unexplained lift at Ringstead, August 8th, 2013 for more about that.) Ringstead beach is not a particularly safe landing option because it is too thin and, sometimes, too crowded. (Water landings are usually fatal because you cannot get out easily.) However, out of view to the right of the photo are ten or more paragliders comfortably soaring, so I continued. I rose above the cliff-top, with walkers at several points on the path there stopping to watch, and some people having a picnic on a grassy plateau below the cliff (but plenty high above the sea).

The lift became weaker and, as a result, the ridge became more crowded with hang gliders and paragliders, so I returned to the take-off hill and landed in the field behind it about twenty minutes after I took off.

On my second go that day, I followed a yellow paraglider, which launched after I did, from the take-off hill to the cliff. 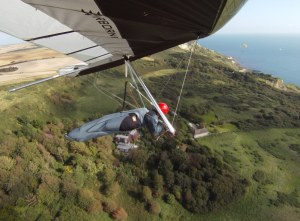 My second go that day: I gained considerably more height at the take-off hill before setting out for the cliff.

I arrived at the cliff with height to spare. Notice how even a slow-flying hang glider like the Sting 3 eventually catches up with a paraglider. (The camera was taking one photo every minute.) 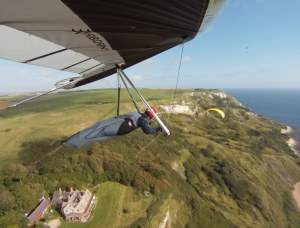 One minute after the previous photo

I did not overtake the paraglider on this first beat of the ridge (going south). I turned round and continued to gain height flying back the way I had come (west). I then turned south again and there was plenty of room. 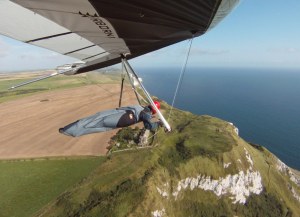 Four minutes after the previous photo

The lift was not great, so I did not get much higher than this. Because the wind was slightly west (coming from the direction of the camera) nobody ventured beyond the promontory (as far as I know). There is little or no beach to land on there. However, in different conditions (a more southerly component to the south-west wind) you can fly along to Lulworth Cove and beyond, and, if you are skilled enough, back to Ringstead. 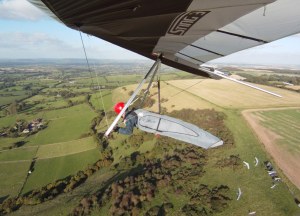 On a blustery Saturday at Bell Hill in late September the thermals were broken and I did not gain more than about 500 feet above the ridge. Others, mostly flying rigid wings, some of which appear on the ground in this photo, did better. The majority of the flexwings there that day were Wills Wing U2s (including one flown by Steve W, whose wing-mounted movie camera produces remarkable results that you can see on YouTube). There was one Wills Wing Sport 2, an Airborne Shark, and a new Rio 2 (the first I have seen). The pilot of the Rio 2 had a new experimental seated/supine harness and a specially shaped control bar (base tube). 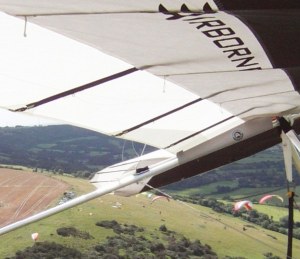 I am always surprised to see that the under-surface batten chords of the Sting 3 are vertical during flight. They are held forward where they emerge from the slot in the sail—by the edge of the oval cut-out.

The airflow below the sail is clearly slow moving. Even so, it perhaps demonstrates that the Sting 3 flies remarkably slowly for a wing with such high performance.

This topic continues in Hang gliding 2013.