This page continues from Hang gliding 2010.

This was my first flight with a GoPro HD digital camera on the wing. It has no remote shutter release, but I set it to take one photo every minute.

A successful air-to-air photo at last!

I was doing up my harness zipper when the camera took this photo. It also caught another hang glider in the frame.

It has a wide angle lens and consequent distortion, which I reduced by two methods: I simply cropped some photos, while I used the free-of-charge GML Undistorter program on others.

This flight, on Monday April 25th, was also my first flight of 2011. It was an anticyclonic day, but the turbulence was not too bad. The wind was about 20 mph; too strong for paragliders, so we hangies had the sky to ourselves apart from some helicopters, powered ultralights, and one or two vintage aircraft from nearby Compton Abbas airfield…

Although my previous on-board camera, a Ricoh FF-9 film camera, could take one frame every minute (until the film is used up) I also used a manually triggered electric remote release to take one photo at a time. The white tape you might see on a downtube in some photos secures the wire from a push-button on the base tube to the camera. The new camera does not have a remote release. Therefore, it removes the temptation to rig it for manually triggered photos. That equates to safer flying: On several occasions with the the manual release I found myself too close to terrain and/or other gliders when orienting the wing to take the shot.

Occasionally a loose gaggle of burly guys and an attractive woman in the middle cycle along the road along the top of Monk’s Down. Madonna’s UK residence is said to be at the end of one of the tracks that recede into the left of the photos.

The prominent bush-shaped copse on the top of the hill in the middle distance (partly obscured by my left leading edge in the first photo) marks Win Green hill, which is used by radio control fliers. The copse is a landmark whose distinctive shape can be seen from miles around. (Isn’t Wingreen the ex-Marine on the motorbike in Electra Glide in Blue?)

Nostalgia ain’t what it used to be 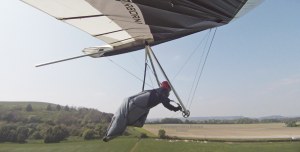 For some reason, this photo reminds me that I have been landing hang gliders in these fields, at the base of Monk’s Down, for more than a third of a century.

The pilot of the hang glider that landed in the brown field has moved it to the edge of the field prior to de-rigging it. That is standard procedure. It maximises the field space for others to land in, although on this day there was plenty of space for the half dozen hang gliders flying there.

Duel in the sky

We had good soaring weather on a weekend in mid July. There were two paragliders circling with me in this thermal, although only one was caught in this photo. 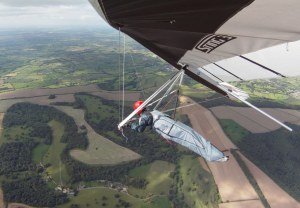 This photo and the next are printed in the prestigious Gallery section of the USHPA magazine Hang Gliding & Paragliding, April 2012. They are also on Airborne’s Facebook page.

Whenever I sank low on this flight, I encountered another thermal. The end result was an easy 17-mile cross-country that took more than an hour of mostly circling in thermals. Then nearly five hours of walking, hitching rides, and driving to retrieve everything and get home…

On my way to the coast

—Words from Wild West Hero by the Electric Light Orchestra (1978)

This topic continues in Hang gliding 2012.