Equipped with a second-hand Ultralight Products TRX 160 hang glider and a new Solar Wings Edge II harness, I flew in Lanzarote, Canary Islands, in December 1995. I carried on flying and taking photographs, which I had always looked forward to taking in to the nursing home to show my old mum, but she died in early December. Maybe she can see them here somehow. 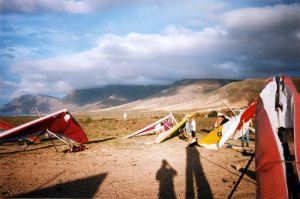 At Malvern in 1996, my glider exhibited a constant left turn, the result of incorrectly assembling it after I packed it short for a flying expedition overseas. 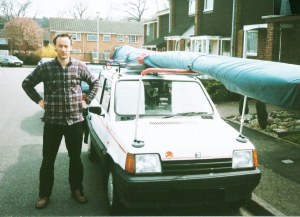 Thinking about why I had assembled the glider wrongly

The first step in analyzing such an event is to fill out a BHPA (or USHPA) incident report form. Completing its different parts helps the pilot (or witness) record the pertinent facts without jumping to unwarranted conclusions. Safety officers at national level analyse these reports and results are published in hang gliding/paragliding magazines. Also, incident reports can result in equipment design changes and sometimes they give rise to new or altered pilot training schemes such as the club coaching system (in Britain) and the pilot mentoring system (USA).

A better landing approach at Malvern

One day in 1997, I found myself lying face-down on the ground under a friend’s Airwave K-5 in the old bottom landing field (with the single power line that runs parallel to final approach). I was under the power line, or, at least one half of the wing was under the line. The owner of the wing I had crashed had just landed my UP TRX farther along the field and he unclipped and made his way towards me. 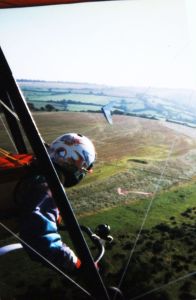 In those days I flew with a large spherical compass clipped to the centre of the control frame base tube. (Not so much for navigation, but as a crude artificial horizon if you are unfortunate enough to be whited out in cloud suck.) It was not broken, as such, but it was in pieces and needed to be reassembled. Alas, the K-5 had a broken keel tube and other damage.

After unclipping, I had no memory of the crash and could not provide an answer to his question “What happened?” To do something useful, I figured I would start by collecting up the bits of my compass. I turned round to start off towards the crashed glider, but I stopped, amazed. The compass was whole and attached to the base tube. I turned back to my friend and said that I could have sworn it was in pieces.

“It was,” he replied. “You just spent the past five minutes putting it back together.” He then asked me where we were.

A good question. The hill resembled the Devil’s Dyke, a popular site on the South Downs that I used to fly in the early 1980s. However, the Dyke has buildings on the top, but this hill did not. A very good question! (It was in fact Bell Hill, the site I most frequently flew then, as now.)

I resolved never to fly another K-5 or K-2 because they feel so unstable to me. (Especially the K-2ic, which terrified me when I flew another friend’s example.)

The Airwave K-5 is held level by a nose-to-ground tether while the Moyes XS is parked safely tail-down across wind — and slightly tail into wind.

At about this time, the farmer of the top landing field supplemented his income by using his tractor to tow a trailer fitted with benches for people to sight-see around the area. Witnessing this, I said to a fellow pilot, “What kind of idiots would pay to go on that?” He replied that he had taken a day off flying to go on it with his girl friend shortly before… He recounted that, while watching the hang gliding from the trailer, somebody said “Isn’t it dangerous?” to which he replied that nowadays it was much safer than in the 1970s. At that moment a hang glider that had been parked flat on the hillside (beyond the brow and out of view from the top field) but not secured adequately, was lifted by the wind and it arced upwards in a lazy back flip over the parked vehicles and the fence to crash inverted in the field! 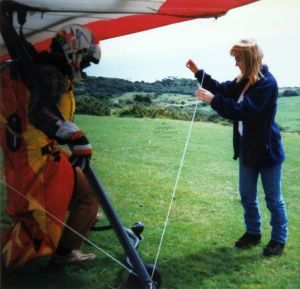 Hang check at Ringstead in 1997

I have flown occasionally in the company of this lady paraglider pilot, together with her paragliding husband, for more than 20 years (as I write this in 2019). 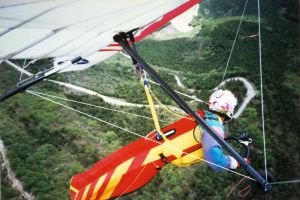 France in May 1997 with the Northampton Hang Gliding Club

The significance of this unremarkable photo, taken a Charbre, near Laragne, is that I encountered an unexpected valley wind on this approach to the ‘bomb out’ field. I landed successfully and immediately transmitted over the radio a warning about the wind. The only pilot who did not receive my transmission, for unknown reason, was a top cross country pilot. He crashed in tress short of the field. His injuries were minor, as I recall, but his wing was damaged.

At the Long Mynd in Shropshire. Notice the sailplane (glider) field behind the ridge top.