The counter-culture rejected ties with traditional society, and felt that suburban living in tract houses was the epitome of everything it despised. This was, of course, because most of the pilots had grown up in the suburbs.

Most of the images on this page are my artistic derivations of contemporary photos. See Copyright of early hang gliding photos.

Hugh Morton of Grandfather Mountain, North Carolina, through his photography and sponsorship of hang gliding, helped advance the cause.

We got to Torrance Beach and saw all these kites in the air and I had a camera with me and got out and shot a few of them, and decided, well, I’d better get some more film. Sent the wife home to get it, and then I went down on the beach and started shooting landings and half the guys that landed on the beach were surfers that I knew.

Danny Bostwick lands on the beach in 1974. Photo by Leroy Grannis.

A hang gliding event was held on an almost windless day at the the 450 ft Guadalupe Dune on the California coast in May 1975.

Buggy at the Guadalupe Dune in May 1975 (no larger image available). Photo by Jim Otterstrom.

Guadalupe Dune in May 1975. Photo by Russ Stolling.

A World War 2 vintage DUKW ferried hang gliders and their pilots the mile from the car park to the top of the dune. If you are interested in plastic models, see Duck à l’orange; my Airfix 1/76th (OO) scale DUKW with scratch built hang gliders, based on photos of this event.

…in those days the sails weren’t fixed as securely as now and the sail on my [Wasp CB240] had become detached from the end of the leading edge after being knocked about on the chair lift. I didn’t think it would have any effect but while I was flying a tight 360 the sail rode up the boom. Suddenly I found myself flying on one half of the kite. The kite went into a spiral dive Fortunately the kites were built like tanks in those days — the CB had two inch leading edges — and it survived the pounding of the G forces. I was then lucky enough to ditch it in a bank of snow.

The interviewer, David Worth of the Southern Hang Gliding Club, added “That flight can be seen on a hang gliding film which is currently touring the cinemas.”

Competitions are for me a must, because I can’t afford to buy hang gliders especially at the price they are today. If you do well in competitions there is always someone willing to sponsor you. 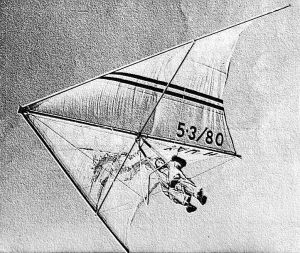 Puff the Magic Dragon was made by Hiway Hang Gliders of Brighton, Sussex, England, headed by John Ievers and Australian Steve Hunt. Its nose angle appears to be the usual 80 degrees of the early standard Rogallos. For more about this manufacturer, see the related topics menu Hiway of Sussex, England, and Abergavenny, Wales.

This one is more advanced in that its nose angle is 90 degrees.

On a low hill near the atomic research establishment at Winfrith in the heathlands of Dorset, England, a 17-year old sailmaker took to the air in a Skyhook IIIA that he made from plans. John J, who is pictured flying on an earlier page in his all-green self-made standard Rogallo, supervised.

Hang glider overhead. This one has the ‘west country’ sail cut and was likely made by McBroom Sailwings of Bristol. 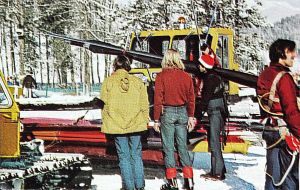 That is Bob Wills on the right. He won the competition in a Wills Wing Swallowtail, which I was to obtain a close look at and ask him about it later in the year. The Wills Wing range of Rogallo flex-wing hang gliders was manufactured by Sport Kites Inc., of Santa Ana, California. (It was subsequently renamed Wills Wing Inc.) For more about Wills Wing and the remarkable Wills family, see the related topics menu Sport Kites/Wills Wing of California.

Standard Rogallo at Telluride in July 1975. Photo by Wings Unlimited. 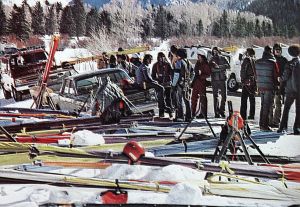 Pilots and gliders at Telluride in 1975. Photo by David Stanfield. 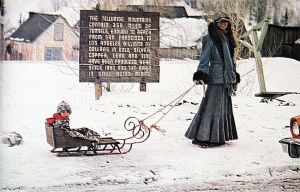 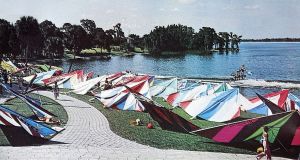 When I was at Rhossili, a coastal hill in Wales on a hot summer weekend in 1978, a ‘middle aged’ couple in the same camp site said they had attended a hang gliding event at Cypress Gardens a year or two before. The guy attempted to persuade his wife that we were doing essentially the same thing; flying hang gliders, but starting from a hill instead of being hauled into the air behind a boat. She seemed to focus into the distance, as if recalling the pizzazz and glamour of the event in Florida, and said, “Oh, but that was fantastic.” 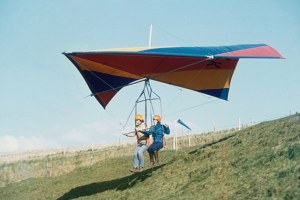 Training flight at Monk’s Down in north Dorset, England. Photo by Dave Lewis.

Having landed in the field at the bottom of the hill, you then carried it back to the top. Photo by Dave Lewis.

Which was more dangerous; flying it or carrying it back up like this?

A Birdman Grasshopper launches at Monk’s Down. Photo by Dave Lewis.