In 1971, a new kind of aviation was beginning, or rather re-emerging after it was forgotten when the Wright brothers successfully added engines and propellers to their biplane glider nearly 70 years before. The new technology of hang gliding found a number of its early leaders on and around the beaches of Los Angeles county, southern California. One of those leaders is David Cronk, who in 1975 additionally became the first ever world hang gliding champion. 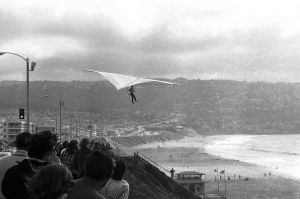 The new activity of hang gliding gets a green light.

I NEVER intended to get this high above the ground. These old photos are by an old friend, Tony Abbott.

By this stage, a triangular control frame replaced the hang cage.

Dave Cronk 500 ft over Torrance Beach in about 1973. Photo by Carl Boenish.

Torrance Beach, about 1973 or so. Carl Boenish set up a keel mounted camera, and we got this great shot. Jack Schroeder and Danny Bostwick flank both sides on a beautiful, post-storm day. 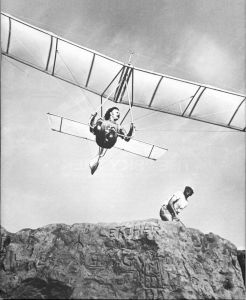 Dave Cronk launches from the bluffs at Torrance Beach in the prototype Quicksilver as its designer, Bob Lovejoy, moves clear in about 1972. Photo by George Uveges.

This was Quicksilver prototype #1. Bob and I had only flown this glider off of Playa Del Rey CA (Dockweiller). I went first, and found myself dumbfound (and terrified) by quickly rising above the ridge and gaining perhaps 100 feet. This glider had a very marginal structure, and used clothesline pulleys and string for controls. After this flight, I took it back to the shop and immediately began improvements.

For more of Bob Lovejoy, including a photo of his canard prototype that led to the Quicksilver, see Project Quicksilver in Hang gliding before 1973.

Quicksilver #2, Playa Del Rey, CA, about 1972-73. Based on our prototype (Bob Lovejoy and myself) I added two feet of span, bringing it to 32 feet. This still incorporated the laminated wood battens (or ribs) that flattened when damp. I also upgraded the rudder with a rigid trailing edge, stiffened up the empennage system with double wires, and generally upgraded everything that was sketchy in the original.
Bob Lovejoy did not stay involved in hang-gliding after his first design effort. Although he was a partner in Eipper-Formance, he never got back into the sport, or the hang glider design world.

Bob was a brilliant toy designer at Mattel Toys, and had a great reputation there.

I had increased wing spar size, added a second lift-cable bay, increased cable diameter, upgraded the rudder control system components, and generally brought things up to a point where I felt confident flying well-above the ground.

In later life Bill Liscomb created the film documentary Big Blue Sky, in which David Cronk is interviewed about the early days of hang glider development and the flying at Torrance Beach.

I had the luxury of designing and flying a wide range of Quicksilver variations. Sometimes I would design for a particular site, person, or event.

This was my final Quicksilver glider design. By this time (about 1977) flexible wing glider performance had surpassed the best Quicksilvers. I flew them mostly for soaring in smooth lift sites, like Torrey Pines.

For more of the Quicksilver made by Eipper-Formance, see under High-performance in Hang gliding 1974 part 3.

Powered ultralight by Air-Tech of Louisiana

It’s hard to believe that this monster, a modern Quicksilver derivative, is fully based on the original 1971 prototype. 1200 lbs, 100 hp.

A vario system I set up in the early 70s. This is the earliest use of a vario in a modern hang glider that I am aware of. I used it at the Annie Green Springs prelim test meet practice session.

Dubbed the “Cronksail” by Joe Faust. Inspired by seeing Richard Millers’ seminal Conduit Condor. This image shows very early preliminary tip-rudders that were subsequently refined. Prototype #1 was literally run over by a Greyhound bus on the 405 freeway when the glider came off the racks on the way to its first test-flight. Good knot tying skills are important. 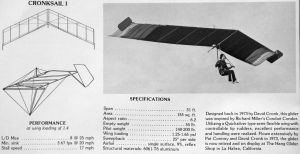 Cumulus 4. This design was the first in the industry (I think) to use high strength 2024 T3, thin-wall tubing. 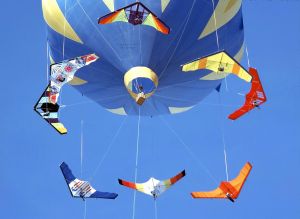 World largest hot air balloon at the time c1976 or so. All Cumulus 5s and 5-Bs. The “B” added tip battens and increased tip chord. A very popular line of gliders. 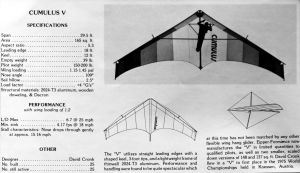 Dave Cronk and an Eipper Cumulus 10 at the Smithsonian Air and Space museum, Washington DC

This was the last of the Cumis, in a long line of successful gliders.

Playground in the Sky, 1977, by Carl Boenish on YouTube (low resolution) starting at 25 minutes 19 seconds for Dave Cronk flying his Cronkite (followed by Volmer Jensen in the VJ-23, then Taras in the Icarus 2 and Icarus 5…)

These are links to Big Blue Sky — The history of modern hang gliding – the first extreme sport!, 2008, documentary by Bill Liscomb on YouTube: