On June 24th, 1977, Bob Wills of Wills Wing was killed when his hang glider was struck by the down-wash of a helicopter filming him for a Jeep advert. Rob Kells, Steve Pearson, and Mike and Linda Meier took on the development of Bob’s latest design, and Wills Wing continued as one of about sixteen major hang glider manufactures in the USA.*

Jim and Henry Braddock were second and first, respectively, at the U.S. national championships held at Heavener, Oklahoma, in July 1977. (Heavener rhymes with heathen, not heaven, apparently.)

Powered hang gliding was going through its early stages at this time. It brought problems additional to those inherent in hang gliding. The man standing and speaking in the following picture is hang gliding photographer and columnist Bill Allen.

Art based on photo by Rick Roelke of a meeting between the FAA and power pilots at Wilton, New Hampshire, on 2 April 1977 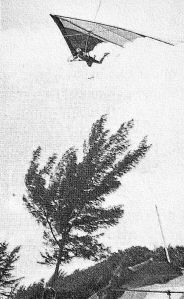 The original photo by Jim Theis, on which this artistic rendering is based, is of Dan O’Neil dune-soaring an Electra Flyer Cirrus 3 in a gale on the dunes at at Boca Raton, Florida, during tropical depression Anita in August 1977. 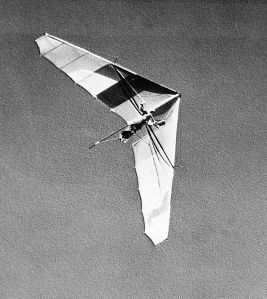 See my threads pages Chargus of Buckinghamshire, England, and Ultralight Products of California and Utah.

Grouse Mountain, where the photo by Leroy Grannis on which this image is based, overlooks the city of Vancouver, Canada.

Hang gliding was still regarded as a spectator sport in the late 1970s. Here is a snippet about pilots John Davis and Glenn Hockett and competition promoter Don Whitmore:

Davis and Hockett and Whitmore were interviewed for national TV, and the remaining pilots packed their gear in the warm late afternoon sunlight. The city of Vancouver was shining, the ships in the bay swinging into the seabreeze.

Former movie actress Bettina Gray travelled the world to photograph hang gliders and her shot of the Skyhook Sunspot on which this artistic derivation is based is unique. My first glider, in 1974, was made by Skyhook, based in Oldham, Lancashire, northern England. In 1978 I temporarily abandoned my own hang glider developments in favour of more mundane pursuits, and I flew a Skyhook Sunspot.

The wing that Ash is flying in this picture is a Birdman Moonraker.

Art based on a photo by Bettina Gray of British instructor Ashley Doubtfire at Mere, Wiltshire, in 1977

When British manufacturer Birdman of Marlborough, Wiltshire, developed the Moonraker with its low-billow sail and chord-wise battens, Roly the sail-maker took the opportunity to upgrade their ‘intermediate’ level glider, the Firebird. He replaced the radial battens (which stay in the sail when the glider is de-rigged) with five chord-wise battens each side, resulting in an appearance similar to the Electra Flyer Cirrus 3. They designated the new version Firebird S. It had much improved performance, but the umbrella-like quick rigging of the original Firebird was gone. 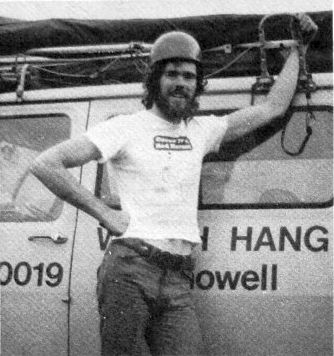 Ken Messenger of Birdman and competition organizer Brian Milton attempted to cross the English Channel in their Moonrakers by first being lifted to altitude beneath hot air balloons. Milton released at 14000 ft and ditched into the channel to be picked up by a Russian ‘trawler.’ (This was during the cold war.) Its crew took some persuading that Milton was a ‘sporting man.’ Messenger released at 20000 ft to land in the same field in France from which Louis Blériot had taken off for the first ever flight across the channel nearly 70 years before. Meanwhile aboard the balloon that had lifted Ken in his hang glider to altitude…

On the way up I got my oxygen equipment tangled up when I was changing cylinders, so I was without oxygen at about 15,000 feet for a while, which gave me a bit of a headache… I was on top of a cloud. It looked so solid… I felt I could get out and walk on it. I had a terrific urge to get out and walk on the cloud!

Aspect ratio, or span divided by average chord, measures the spindliness of the glider. More span provides greater efficiency, in principle. In practice, however, increasing span incurs problems in controlling the washout (span-wise twist) of the sail and it also imposes higher structural loads and it can incur handling problems. 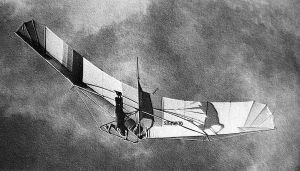 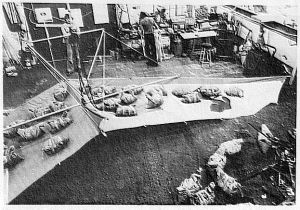 At first we had hoped to conduct strength tests using a car-top aerodynamic loading system, but we were warned by the experience of UP and Albatross in America that any test done in this manner tends to result in a large pile of scrap after the smallest fault develops in the glider. We therefore opted to test the strength of the glider by a static loading method (as is used for conventional aircraft).