The shock of the opening parachute was nothing compared to what was to follow: hanging in my parachute risers, I had a full and complete view of the destruction of Challenger One as it descended rapidly, wings level straight into the desert floor.

— Excerpt from an account by test pilot David H. Gollings, one of the contributors to the book reviewed here.

Gollings is one of thirty test crewmembers who contributed to this book. The Challenger One he watched crash while still descending by parachute was the prototype Canadair Challenger passenger jet. Gollings and another crew member bailed out and survived, but the pilot was killed in the crash. That excerpt illustrates both the strength and weakness of this book. Its strength is that of providing mostly firsthand accounts of flight test incidents. Its weakness is what seems a complete absence of editing, even at the most rudimentary level. (Gollings’ contribution is fine really. I doubt that most readers would imagine he was somehow suspended by his parachute risers while the harness was flapping uselessly beside him, but why not just fix it before publishing it?)

The pilots whose stories comprise this book are from many nations and varied backgrounds, famous and obscure. The first chapter is by George E. Cooper, who was director of aviation safety at NASA, although I have to admit I have never heard of him. The second chapter is by legendary Harrier test pilot John Farley. Their aircraft span the range of flight regimes and uses, from helicopters to the Concorde supersonic airliner.

In summer 2011, I attended a talk given to my hang gliding club by a former RAF test pilot who said the McDonnell-Douglass F-4 Phantom II was his favourite jet fighter. However, he went on, it would not pass today’s standards of airworthiness as regards its handling qualities. (I read that the flight control system of the F-4 came about because somebody trampled on the blueprints…)

A commendably brief account by George J. Marrett in this book sheds a rare light on the peculiar low speed handling qualities of this popular jet. Designed for the US Navy, it was adapted for use by the Air Force, and it seems that some configurations in that use exacerbated its problems:

After takeoff, with a full load of fuel, the aircraft was being flown near the aft CG limit. Within 25 minutes of takeoff, all eight planes crashed on test ranges.

Marrett writes clearly and without unnecessary detail in describing the flight-testing he carried out to attempt to discover why so many crewmen were being killed during type conversion training on the F-4.

Above 22 to 24 units [of angle of attack] any aileron input produced a rapid roll-off in the direction opposite that commanded by the lateral control. McDonnell engineers designed a rudder shaker to be activated at 22 units but it was completely masked by heavy airframe buffet. The only flight control left for maneuverability at high angle of attack was the rudder.

Marrett explains how in some situations, pitch divergence set in and, “inexperienced student pilots maneuvered the Phantom through airframe buffet and into a full stall, ending in their loss of control and a crash.” As a result of Marrett’s testing, the F-4C was modified and different procedures put in place to mitigate those shortcoming of this heavy, but fast aircraft.

As if fate meant Marrett to bear further witness to his findings, he subsequently flew piston-engine A-1 Skyraiders in Vietnam. Those slow but heavily armed aircraft provided armed cover during helicopter rescues of downed crews, including F-4 crews. He also flew as a forward air controller directing F-4 strikes:

Also many F-4 aircraft went down during these air strikes. Skyraider pilots always chalked the losses up to enemy ground fire. During the course of the Vietnam War, out of a total loss of 2,254 aircraft, 444 of them were Phantoms. From my flight test experience it is now my belief that more F-4s were lost due to out-of-control maneuvering by the pilot than were downed by the enemy.

Here is Tony Blackman on flight testing an Avro Vulcan delta wing nuclear bomber with a 15,000 pound air-launched missile under one wing:

We had our normal pre-flight briefing and were assured that there would be no problems at all. A slight asymmetric drag effect, but no worries. I released the brakes and just managed to prevent the aircraft careering off the runway by applying braking, full nose wheel steering and full rudder. I hauled the aircraft into the air and all of a sudden my problems disappeared. Incredibly everybody from our chief aerodynamicists downwards to myself had forgotten about the asymmetric inertia effect.

There are examples in the book of not mere oversight, but almost complete disregard for the safety of aircrew on the part of ground based folk.

The next thing I remember was seeing the airplane disappearing below my feet, slowly spinning towards the ground. It was like looking at an old black and white war movie, very unrealistic. It was only after first looking up, seeing a full parachute canopy open above my head, and looking to the side and seeing Tash hanging below his chute, that I convinced myself that I actually had ejected from the aircraft.

Björn Johansson of the Swedish air force was mountain biking in the desert near Edwards Air Force Base amid snakes and Joshua trees one day. The next day he ejected from a T-37 and landed by parachute in that same desert. Why can’t native English speakers write as clearly?

At 63,000 feet, air pressure is so low (about 3 per cent of that at sea level) that liquids boil at 98˚F. Since this is the normal temperature of human blood, without countermeasures (pressure) to protect the body, at altitudes above this the blood would boil and the body would explode and vaporize.

Come on! The body has its own built in ‘countermeasures’ against depressurization; the skin. (And the many interconnected layers of organs inside.) When a soviet spacecraft depressurized during re-entry, its three occupants were killed, but they did not explode. Ray Goudey’s otherwise excellent tale of flight testing the U-2 in the mid 1960s possibly reflects his learning bio-physics from watching James Bond movies, in which various baddies are exploded by locking them in a pressure tank and sucking the air out. He would do better to watch 2001 a Space Odyssey by Arthur C. Clarke and Stanley Kubrick. It is equally fictional, but astronaut David Bowman survives several seconds of exposure to the vacuum of outer space with only a nosebleed, as I recall. That seems to me a more likely scenario.

Not all aviators are great writers, or even adequate writers, so proof-reading and editing are essential in aircraft books. The absence of that stage of production is this book’s principal weakness. Perhaps not surprisingly, contributors by some airmen whose first language is not English are among the best written.

The book is riddled with missed opportunities to clarify valuable accounts that appear to have been hurriedly written. Trying to describe the AIM-7 Sparrow missile housings on the underside of the F-4 in words is difficult. Those wasted of words could have been cut by using a photo instead.

And, on the subject of photos, many are unnecessarily small, some have been improperly digitized and show aliased edges, and one or two are just plain wrong. How can anyone in aviation mistake a Griffon-engined late model Spitfire with the Merlin engined Mark V? 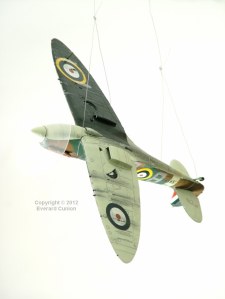 My 48th scale Spitfire Mk1. Like the MkV, the Mk1 had a Rolls Royce Merlin engine

I do not want to go on too long about the book’s shortcomings, so I will just add that the inclusion of a glossary in any textbook is a bad sign. There is no need for abbreviations and obscure phrases. Plain English works fine. I wanted to know what a parting strip is. Naturally, the glossary contains no explanation.

Despite its shortcomings, this compilation of firsthand accounts is gripping.

The account that I felt most frightening is by an F-111 test pilot whose navigator nearly drowned at 50,000 ft. The tale is told well, complete with the difficulty of radio communication across the various civilian and military agencies with responsibilities for highflying aircraft.

Phantom of the operator, my review of Phantom over Vietnam by John Trotti, 1984

Righteous stuff, my review of the movie Toward the Unknown, 1956, filmed largely at Edwards Air Force Base

Smilin’ Al, of the Cape, my review of Light This Candle, The Life and Times of Alan Shepard, America’s First Spaceman, by Neal Thompson, 2004

Space suits and frocks on the box, my review of the movie The Right Stuff, 1983

Testing for stability and structural strength of hang gliders

Chuck Yeager 1991: Yeager talks for an hour and a half on the American Academy of Achievement channel of YouTube