Jones’ paintings illustrate a universe in which sexual dimorphism in humans has continued over the generations. Women are endowed with exaggerated curves, while the male of the species is typified by tall, Spock-like men of action. In short, human evolution (in the moral sense rather than the value-free strict biological sense) has continued. Bear in mind this was the accepted view of the future of humankind in the 1970s, before hunkiness in males became fashionable. 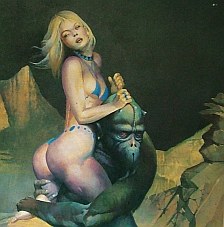 Detail of Kidnapped by PeterJones, 1976

Pretty women out walking with gorillas down my street

— Words from Is She Really Going Out with Him? by Joe Jackson, 1979

Younger readers miss the point of Jones’ 1976 painting Kidnapped. Why would an attractive woman not want to be carried off by such a hunk? Indeed, they find the technological heroes of this future universe laughable.

Such reactions perhaps provide us with insight into why the common man resents the concept of the thin, fit, and intelligent individual as hero. He knows he cannot be an astronaut or a motocross star, but with luck (and by using his social skills) he might one day accumulate wealth enough to attract women. Is it surprising, therefore, that the majority reject the very concept of the future of mankind belonging to proverbial brave men and beautiful women living in equally proverbial sunny uplands?

Airline executives continued to donate penthouse suites and stewardesses, while CEOs offered Acapulco haciendas for astronauts and their girlfriends. But the astronauts would soon learn that everything had grown too big too fast and that workmanship had suffered.
The astro-party was about to crash.

Maybe the art in Solar Wind documents two opposing views of manhood, those of pre- and post crash. 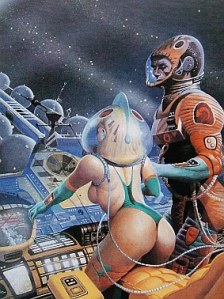 When Jones started to paint covers for science fiction, art directors instructed him to “Give me a Foss – any Foss”. Indeed, to my mind, the best paintings in this book are those that resemble the work of Chris Foss (see Armageddon tired of books without pictures) some of which out-Foss Foss!

The book has too much sword and sorcery. A man must wear a crash helmet and survival suit to qualify as a hero, not a pointed hat and flowing robes. In other words, where an image depicts a scene so alien it does not impinge on our values, it is meaningless. To satisfy the viewer — to be complete as a work of art – the picture must reinforce our values. The male humans in the picture must be clear cut heroes or baddies. However, the male hero need not necessarily appear in the picture. In Kidnapped, the viewer is part of the picture, albeit unseen. We feel the urge to recue the maiden and, in doing so, perhaps – after a suitable period enabling her to recover from her ordeal – grab her for our own purposes…

The young Jones’ imagination was perhaps held back by too literal a basis in Vietnam-era hardware. Orphans of the Sky (1974) are clearly flying a helicopter gunship that has somehow reached orbit, Timesnake and Superclown (1975) are crewing a chopped and wingless F-4, while the wreck of John McCain’s A-4 has been shipped to a long-abandoned moon base in The Gold at the Starbow’s End (1974). Additionally, you get to see a futuristic development of the crew escape module of the F-111. 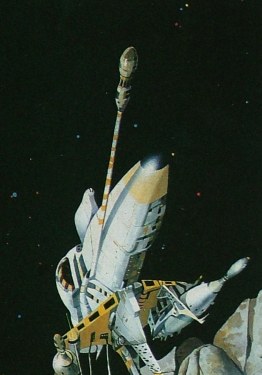 What did the Vietnamese do with all those wrecked Skyhawks?

However, in Firestorm (1977) Jones provides an uncanny depiction of the long range bombing missions from the USA to Yugoslavia and back more than twenty years later — despite the single seat bomber in the painting bearing little physical resemblance to the B-2.

Along with some strangely valueless – by which I mean non meaningful – art, Solar Wind captures, in striking colour, a set of Western values in the 1970s, albeit values that the man in the street never shared and resents to this day.

Among friends, my review of The Alien Way by Gordon R. Dickson, 1965