Water in the wheelhouse; how dreams are formed

Home (contents) → Miscellaneous → You only live twice → Water in the wheelhouse; how dreams are formed

Water in the wheelhouse; how dreams are formed

The wind in the wires made a tattle-tale sound
and a wave broke over the railing.
And ev’ry man knew, as the captain did too
’twas the witch of November come stealin’.

— from the song Wreck Of The Edmund Fitzgerald by by Gordon Lightfoot, 1976

This page relates to my article You only live twice, which unlocks the door to immortality. (Hey, think big!)

Here is a report I heard on the radio of a dream. As such, it is third-hand info, but I cannot think of a better illustration of the nature of dreams and of how the common view of dreams as memories of imagined experiences while asleep is wrong.

The dreamer was of manning the helm (steering wheel) of a ship or boat in a storm. Progressively larger swells caused seawater to crash onto the deck until a wave came over the wheelhouse and onto the face of the dreamer, who then woke. He reflexively reached to his face to wipe the water away – and his hand came away wet! 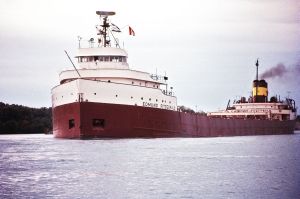 Clearly, the actual sequence of events was as follows:

The witch of November is not the only thief of our grasp on reality, apparently. Legendary Belgian cartoonist Hergé (Georges Remi) referred to the phenomenon in The Broken Ear (1935-37):

…Tintin dreams of an Arumbaya stealing into his bedroom and stinging him with a poison dart, only to wake up suddenly and find it was a mosquito bite…

— from Tintin, the Complete Companion by Michael Farr, 2001 page 67

We should not trust the ‘time stamp’ of when we wake (supposedly after the dream) or of anything else about a dream. We don’t imagine the content of the dream is real, so why should we trust our sense of the order of events connected with it?

This perhaps does not really belong on a page about dreams, but I felt the need to include it somewhere. Maybe here is as good a place as any because there is a parallel between the aloneness of a dream and the aloneness of solo flight. Beryl Markham flew the Atlantic on her own from England to the USA in 1936. This is a snippet from her account of that journey.

Being alone in an aeroplane for even so short a time as a night and a day, irrevocably alone, with nothing to observe but your instruments and your own hands in semidarkness, nothing to contemplate but the size of your small courage, nothing to wonder about but the beliefs, the faces, and the hopes rooted in your mind–such an experience can be as startling as the first awareness of a stranger walking by your side at night. You are the stranger.

The Wreck of the Edmund Fitzgerald documentary film snippets set to the Gordon Lightfoot song. Not a dream, unfortunately.