Although I do not fly powered aircraft, I have always built plastic models of them and taken an interest in them. Additionally, the early days of modern hang gliding (mid 1970s to late ’70s) gave rise to powered ultralights (known as microlights in Britain because of an existing ultralight category). They were therefore included in the content of the hang gliding magazines of that time, to which I subscribed. 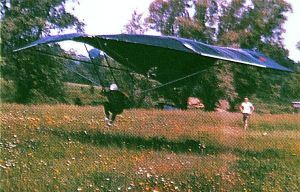 Art based on a photo of Barry Palmer in a 75hp powered Rogallo at Bloomfield, near Hartford, Connecticut, in 1966

Engine above the sail 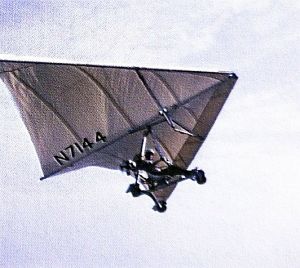 There is more about Barry Palmer in Hang gliding before 1973.

In the early days of hang gliding, it was not certain that the Rogallo wing would become dominant and the same question was unresolved when power was added. See Sticks and rudders in Hang gliding before 1973 for more about the VJ-23 and for its most successful descendant, see the CFM Shadow under Endless summer in Defying Newton. 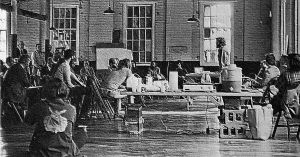 Meeting between the FAA and power pilots at Wilton, New Hampshire, on 2 April 1977. Photo by Rick Roelke.

The Pterodactyl was based on the Manta Fledgeling 2 rigid hang glider. (See American revolution in Hang gliding 1978 and 1979 part 2.) 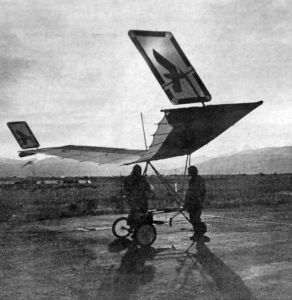 The Quicksilver was an early hang glider which became the basis of a popular line of powered ultralights. This is a multi-axis control variant incorporating spoilerons for roll control. The original Quicksilver had only a rudder and lots of dihedral. The rudder put the craft into a skid and the dihedral then caused it to roll. Kind of weird, but it seemed to work.

The Quicksilver was manufactured by Eipper Formance Inc. See High-performance in Hang gliding 1974 part 3 for a little about the origins of that manufacturer.

Ted Rhudy in a Quicksilver receives a briefing from Virgil Reiners in 1981. Reprinted courtesy Light Sport and Ultralight Flying magazine.

Ted Rhudy was partly paralyzed in a car crash, but that did not prevent him from learning to fly. See also Ability in Hang gliding 1990 to 1993.

The Ultralite Soaring Inc. Wizard of 1981 looked a lot like a Quicksilver. Reprinted courtesy Light Sport and Ultralight Flying magazine.

The dream of personal powered flight from a field near your home became reality with the invention of powered ultralights. However, because of low flying rules in most countries, flying from a field as close as this to your home is, for most people, not a realistic aim. 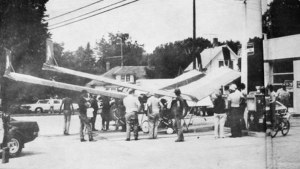 A section of two Pterodactyls refuels at a roadside gasoline station.

The Pterodactyl was based on the early 1970s Fledgling rigid hang glider. 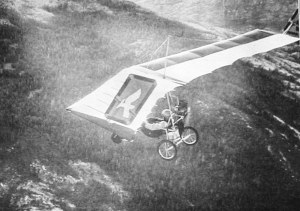 Powered ultralights enabled greater access to the skies than was previously possible.

The sturdy yet voluminous nature of the biplane found a modern resurgence in powered ultralights. Most if not all biplane ultralights were derived from Taras Kicenuik’s Icarus 2 (see School for perfection in Hang gliding 1973 part 2.).

In the following air-to-air photo, a flex-wing powered ultralight (middle left) shoots the space shuttle runway at NASA’s Kennedy Space Center in Florida. It was taken by hang glider sail-maker Roly in about 1999. He writes, “…you could call up NASA radio and get permission to run along it and return, not below 500′.”

Over the space shuttle landing zone

Why the 500 foot height rule? Who knows? However, that stretch of water reminds me of these words from A Man on the Moon, the Voyages of the Apollo Astronauts, by Andrew Chaikin, 1994:

About a week before the launch of Apollo 14, Cernan was flying a helicopter over the Banana River, enjoying the clear air and the smooth, mirrorlike water — so smooth, in fact, that he misjudged his altitude and crashed into the river. The chopper exploded in flames, and Cernan had to dive into the water to escape being burned to death.

Vehicle Assembly Building photographed by Roly aboard a powered ultralight

At the time of writing, the Vehicle Assembly Building, which contained the Saturn V moon rockets and space shuttles while they were assembled, is the largest single-story building in the world.

When I was undergoing hang glider aerotow training at Villamartin in Spain in 2004, this Cessna O-2 (or possibly it is the civilian version) was undergoing restoration in one of the hangars. The O-2 provided twin engine reliability as a replacement for the smaller O-1 Bird Dog used in the forward air control (FAC) role in Vietnam until the introduction of the purpose-built North American OV-10 Bronco.

For an unusual variation of the Cessna O-2 see Science fiction/fantasy in Other plastic model aircraft.

Multi-paned canopy of the Antonov 2

The Antonov 2 is a transport biplane. It was used by — among others — North Vietnam during their war against the south (and against the USA) in the 1960s and early ’70s. You might wonder what I was doing flying one instead of attending school! This example was at Popham, Hampshire, England, in 2005.

The An-2 is like a seaside blockhouse with five portholes, some random cables and a little conservatory on the roof.
…
The two-horned, floor-mounted yokes stand on over-strength binnacles, and the instruments are laid out at random like salvage in a museum display.
…
There’s never been a noise like it.

Coincidentally, the manufacturer of the hang glider I flew at the time, Aeros of the Ukraine, was originally part of Antonov. 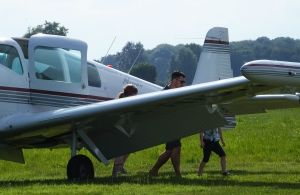 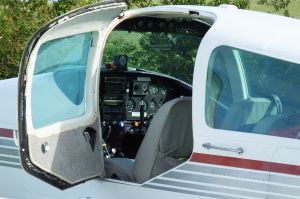 Full power check prior to take off

Notice that, compared to my 2007 photo, the power lines have been re-routed underground instead of crossing the approach.

A ridge too far, my review of the movie The Bridges at Toko-Ri, 1955

Easy riser, my review of the movie Fly Away Home, 1995

Righteous stuff, my review of the movie Toward the Unknown, 1956

Saving Major Tom, my review of the 1967 James Bond movie You Only Live Twice

The following are videos on Dan Johnson’s YouTube channel Light Sport and Ultralight Flyer. Dan provided much hang gliding industry information in the early years, some of which I have drawn on in my hang gliding history pages. These are just a few vintage powered ulralight videos I spotted in the list: