This paper glider is not a Rogallo wing in the strict sense because it does not use the airflow that results from its flight to hold its shape. However, its shape resembles that of the early (1970s) standard Rogallo hang gliders, which inspired its design.

It is asymmetric and it tends to be unstable in pitch, but it is simple to construct and – when you launch it just right – its glide is impressive. It is easy to build, requiring no cutting, gluing, or the adding of weights, but it is tricky to launch.

I claim copyright on this design from 1979.

The nose is at left

Lay two sheets of paper on a flat surface, overlapping as in the first photo. The slight open ‘V’ at the tail is optional.

Folding the first ‘ear’ back

Fold the ‘ear’ back.

No need to stick it down. The next job is to turn the whole thing over.

Next, turn the whole thing over. 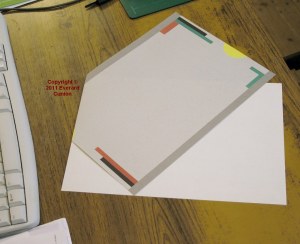 Whole job turned over ready to fold back the other 'ear'

Fold the other ‘ear’ back to form the nose.

Second ear folded back. Again, you do not need to stick it down. 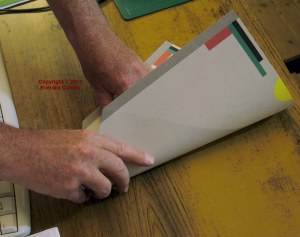 Fold in half lengthwise and crease the fold.

Fold in half lengthwise and crease the fold.

At this stage, you can see there is more weight of paper at the nose than the tail, which is correct. The aerodynamic centre is at about the quarter chord point.

Fold and crease to form one leading edge.

Fold and crease to form one leading edge. 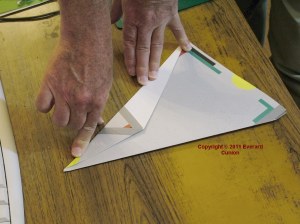 Both leading edges are formed.

Turn over and repeat… 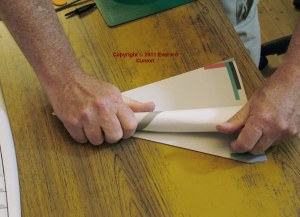 Roll rather than fold to impart an aerodynamic section.

Most paper darts rely on a crease in each half to approximate an aerodynamic shape. You could do that here, but to obtain the desired Rogallo shape, use both hands to roll it tightly.

The shape of the conical Rogallo

When it springs back out, you should be left with a partial cone. When you have rolled both halves, the result resembles the standard or conical Rogallo. (So called because it consists of two partial cones.)

Next, add a ‘Concorde’ kink near the nose. How near? A bit nearer than in the photo (as it turned out – it dived with the kink that far back.)

Top view of another one

Rotated to show the nose flap, a characteristic of this design 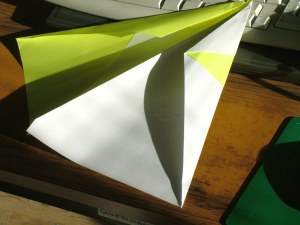 Because it is unstable and its launch technique a critical acquired skill, it needs still air, so it is suitable only for flight indoors or in absolute calm outdoors. 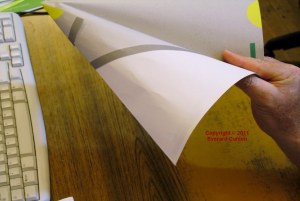 My thumb is under the left wing, forefinger on top

Hold between thumb and two fingers at the tail, and gently push it until it starts to fly, and which point – if you get it right – it flies out of your fingers and begins a graceful glide across the room.

UP is where it’s at, 1/24th scale scratch built standard Rogallo hang gliders

I moved Chris Gonzalez’s contribution to UP is where it’s at, which is where I am sure he intended to put it.