On the hill part 2: North, east, and west

On the hill part 2: North, east, and west

This page follows On the hill part 1: South and central. It is about St. Catherine’s Hill, Christchurch, Dorset, England.

The north I refer to in the sub-title is the north end of the southern part of the hill. That is, south of the A338 ‘spur road.’

This track led down to tunnels through a jungle of bushes that, in places, resembled my idea of a primeval forest. In winter, the valley floor was marshy, but in summer you could ascend to the north part of the hill (Ramsdown Hill) overlooking Hurn Airport (now Bournemouth International Airport). Then they built the A338 ‘spur road’, which cut the hill in half. Standing where I took these photos, the distant sound of traffic is constant, day and night.

Multi-color foliage in May 2020

These two photos are dedicated to Emily of the British Club in Charlotte, North Carolina. The heather is not purple at this time of year, but the rhododendrons are.

Ramsdown Hill is the northern hill cut off from the rest of St. Catherine’s Hill by the A338 ‘spur road.’

In this view from the bridge over the A338, Ramsdown hill is just out of view at left and St. Catherine’s Hill is just in view at right. Receding traffic is heading in the direction of Ringwood and oncoming traffic is going toward Bournemouth. See under External links later on this page for photos taken more than a century ago at this spot, where there was a river ferry and cottage. 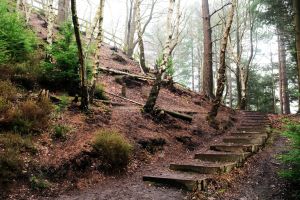 Derelict building on the top

When I last stood at the top of this hill in the mid 1980s, I could see the airport. However, whether because of the tree growth since that time or the fog on this day, I couldn’t see Jack Schitt(*). See Eye in the sky later on this page for an aerial photo taken in 1953 from several miles away, which seems to indicate that the hill top had been scraped bare at that time.

Inside face of the east wall of a derelict structure

Turning around to the west wall…

I took these photos standing inside a derelict structure set into the west side of the hill. There are so many of them that you can be walking along a dirt track and then you realize it is hard and level, and that you are on a man made structure. Several of the more obvious ones are rectangular bases set into the lower slopes alongside Hurn Road.

More graffiti on another derelict structure

This one is visible from Hurn Road, which is the northern continuation of Fairmile Road.

Home Farmhouse is below the hill on Hurn Road.

Returning south to St. Catherine’s Hill, this virtual journey continues down the east side of the hill and a time-slip of nearly half a century.

This was a flight test of one of my experimental hang gliders in 1976. This north-east facing slope had many fewer and smaller trees in those days. The disused Ringwood railway line is visible paralleling the base of the hill. More about that farther on. Incidentally, on the previous page is a comment by Roly Lewis-Evans. While still a teenager, he made the sails of my early experimental hang gliders, including this one.

Roughly the same view in March 2021

Airliner climbing out in March 2021

These satellite images do not show the slopes well. The light diagonal track runs along the top of the north-east facing ridge used by radio control glider fliers for many years. The straight track on the right, partly obscured by trees, is the old Ringwood railway line (Dudmoor Lane).

I taught myself to fly a hang glider on the north-east facing slopes in 1974. Some of the radio control glider guys built a hang glider and I taught them to fly it there. (See Hang gliding 1974.) The caravan is beside the old Ringwood railway line (Dudmoor Lane).

The old firing range was at the bottom of the southern-most end of the east slope, below the triangulation point at the top of the main track up from Fairmile Road. (See Eye in the sky later on this page for its location.) A concrete trench contained girder like structures for raising and lowering targets. At its eastern end was a ‘safe room’ (its roof in 2021 is partly collapsed) presumably for target winch operators.

Remnants of target hoists protrude from accumulated earth that has partly filled the trench. As far as I recall, shooters had no shelter. They rested their firearms and ammunition on trestles at their firing positions down the track to the right (south) of this viewpoint.

Slope north of the trench

The grey clay and sand there featured several springs in wet weather, below which as youngsters my friends and I built dams. On shooting days, bullets whacked into this slope. Ricochets and high shots went over the top. For an experience of that, see Under fire in About the author. 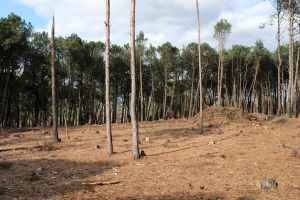 Are they building a heliport?

Eye in the sky

But first an eye from the ground.

The following photos are from Britain from Above (linked later on).

Beware the edge of the cloud shadow about level with the far hill. (See how it crosses the rail line.) It could be confused with the contour of the top of the far hill, which does not extend that far east. Notice also the size of the white structures on the left of the main road north (Fairmile Road) just before the right fork to the near hill. They far exceed the brightness and sizes of nearby houses. Were they tents? If so, containing what? 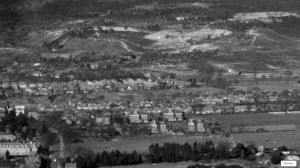 Examining the upper right quadrant of the second photo…

The spur (closest feature) is now (in 2020) completely overgrown, but in the late 1960s and early 1970s its near side was partly bare gravel and sandstone, with gorse bushes crowding its base. (Motorcycle trials riders of the caliber of Sammy Miller and Alan Pickering rode up that curve, which was sheer at the top, accelerating from a standing start among the gorse that was already a steepening incline.)

The lighter area behind it is what is now the firing range quarry. To its right is the hillock that has for years sported a triangulation point (from where I took the long distance photos of Hengistbury Head and the Isle of Wight).

The next lighter area, at upper right, is the quarry that contains Sammy Miller’s drop.

The Ringwood railway, visible in the 1932 photos, ran along near the base of the right edge of the hill. The railway lines were taken up before we moved to the area in 1964. In the 1970s it was a dirt track. It is now (in 2021) paved along at least some of its length.

Up to about 1989, I think, the ‘processing plant’ for whatever they extracted from the quarries sat beside the railway line by the bridge in Bargates. It featured a tall steel conveyor structure painted light blue. It was north of the road bridge; that is, the other side of the road bridge from the railway station.

Here, the photo aircraft is more to the right (east) than in the 1951 photo, so we see more of the heather-covered east slopes. I believe the roughly horizontal light streak below and to the left of the ink blotches is the original firing range. (See Old firing range earlier on this page.) The apparent cliff-like east edge of the north hill I believe is an illusion caused by trees. There is nothing there as steep as that as far as I know. (See Ramsdown Hill earlier on this page.)

This image is cropped from a photo of Boscombe pier taken over the sea. The range is about five kilometres (3 miles). Most of the north hill (Ramsdown Hill) at left is barely discernible because it is so similar to what lies beyond in its mix of shades. However, it seems that its highest part (left-most) shows up lighter, possibly because of quarrying on its top.

This is another crop of the same photo in Britain from Above. Hurn airport (previously RAF Hurn and later renamed Bournemouth International Airport) is at left. What I have labelled the pass between the two hills is where the A338 ‘spur road’ was built subsequently. Below and to the left of my down-arrow \/ under that annotation (in green) is the location of Blackwater Junction, connecting Hurn Road and the A338.

Christchurch, Hurn Road, At The Blackwater Ferry 1900 on Francis Frith

Christchurch, Hurn Road, At The Blackwater Ferry 1900 (photo at same place on a foggy day) on Francis Frith