This page follows Christchurch: Bargates. It continues part of a virtual tour of Christchurch on the Dorset coast of England.

I took most of these photos in 2020 and 2021. The photos I took in May 2020 used a Fujifilm FinePix HS50 EXR zoom camera. I took the remaining photos with a newer Fujifilm X100F fixed lens compact. Both are electronic cameras despite the film part of the name Fujifilm.

I have also included a couple of photos from 1996 taken with a film camera.

* Semi literate people, who constitute a large proportion of the local population, have no problem associating the word bypass with a road that leads straight to the town center.

The red phone box was taken away in September or October 2021.

Incidentally, the only café in Christchurch (Dorset) I do not recommend is Caffè Nero on the corner of the High street/Saxon Square. 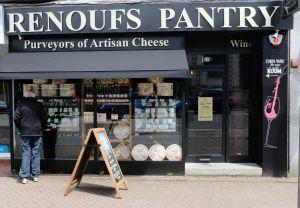 A few metres along is this shop, new in May 2021, with a similarly black front. It is also painted black on the inside and has an array of tiny lights strung from its black ceiling like stars. 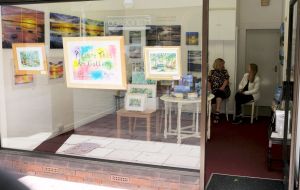 Picture this – a day in December
Picture this – feezing cold weather
You got clouds on your lids and you’d be on the skids
If it weren’t for your job at the garage.

New in August 2020 was the Picture This art gallery featuring the work of Kate Marr (that’s her in the white jacket). The gallery was closed by November, being replaced by a candy store (sweet shop) but the Picture This gallery is open in Bournemouth. See under External links later on this page.

Incidentally, if you are a Blondie fan, you might like a couple of my photos of Cynthia.

The Oasis café is long gone, but I remember sitting outside it with my old mum in the last year of her life reading a magazine about World War 2 airplanes that I had just bought in WH Smith, a few metres away. At the time of writing (summer 2020) these premises are occupied by one of a succession of small businesses that, while possibly viable in London, are doomed to fail in provincial Britain, their parting message sometimes appearing as a printed sheet complaining that they were forced to close because of insufficient government subsidy. The free market, eh?

These three are skilled guitarists and harmonious vocalists (or what we used to call singers). They perform mainly Beatles songs and they seem to call themselves The Henrys (if I recall right). They have a web site, but I did not make a note of it, figuring that a well-phrased search would find it. Well phrased or otherwise, I found no trace of them online.

In contrast, Sound of Soul has a web site and Facebook page. See under External links later on this page. 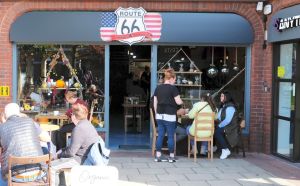 The people in flight streamed out on 66, sometimes a single car, sometimes a little caravan. All day they rolled slowly along the road, and at night they stopped near water. In the day ancient leaky radiators sent up columns of steam, loose connecting-rods hammered and pounded. And the men driving the trucks and the overloaded cars listened apprehensively. How far between towns? It is a terror between towns. If something breaks — well, if something breaks we camp right here while Jim walks to town and gets a part and walks back and — how much food we got?

One wall inside the café is adorned with an image of the desert road stretching to the horizon, reminiscent of the movie Electra Glide in Blue. See my review Blue, blue, electric blue.)

Out of Saxon Square and on to the High Street, this saxophonist is in front of the town hall.

Looking north along the High Street on a Monday…

Monday market in the High Street in June 2020

The spire of this church is prominent in a photo I took from a nearby hill looking towards the priory and the coast. See On the hill part 1: South and central.

This was during the 2020 coronavirus pandemic, during which many shops were closed and pedestrians kept a two-metre distance apart, unless they were members of the same household.

The Ship in the High street in late May 2021 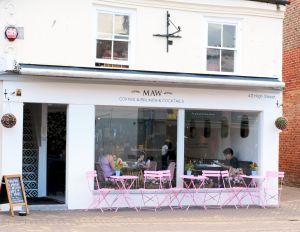 Maw café was new in July 2021 and is opposite The Ship inn. I took this photo in the afternoon, when that side of the street is in shadow.

A three-legged dawg went in and said “I’m looking for the man who shot my paw.” (As in maw and paw…) The Christchurch branch of the Central Intelligence Agency occupies the rooms above (apparently).
🙂 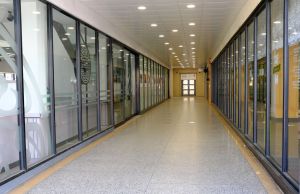 The doors at the end of the arcade used to be an entrance to the main post office. Now (in 2020) it is a vintage ladies’ dress shop. Inside the glass at right is a café bar, but for many years it was a carpet store. And the Pizza Express on the left was in the early- and mid-1990s a shop of mixed content, which included plastic model kits and even aviation postcards. The spaces farther down have changed use similarly over the years.

The Post Office arcade is just out of view to the left. The Oxfam premises are now (in 2020) occupied by a mobile phone store. Courts carpet store is now a large cafe-bar. Bookends book store, next along from Courts, had in 1996 just moved from its much smaller premises in Church Street; behind us in this view. Bookends is still (in 2020) in its new location.

Proceeding from the mini roundabout at the end of the High street onto Castle Street, from which the red car is emerging in the preceding photo… 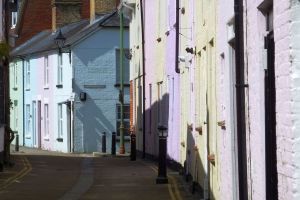 Side street off Castle Street of pastel painted houses in May

I did not get around to asking if she is related to Siouxsie Sioux. (See Faina as Siouxsie in Life-size dolls.) I asked her name though. After pausing for thought, she replied, “Grace.”
🙂

Grace is real girl incidentally, not a life-size doll.

This topic continues in Christchurch: Convent Walk, priory and grounds.

Sound of Soul choir, based in Bournemouth