Overview by Everard Cunion in March 2013, of Guys and Dolls, a documentary by North One Television, 2006

This documentary accidentally made me the world’s most famous hang glider pilot. (Or perhaps infamous…) Commissioned by Five, who screened it in Britain in the fall of 2006, it was subsequently broadcast by different television companies around the world, including BBC America.

Its principal subjects are Davecat, Gordon, Mike, and me. Its common theme is a hobby shared by the four of us. Additional input is provided by Matt; the talent behind the largest manufacturer concerned (in the USA at least) and Slade; who specialized in the difficult repairs sometimes necessary. (Slade has since gone on to other things.)

Naturally, to create a cohesive narrative, programme makers find as many commonalities among the participants as they can. Aviation — and in particular aviation modelling — fitted that requirement. My 1/72nd scale F-86 Sabre appears, as does Mike’s huge flying F-86 (hangared in his garage alongside an aerobatic biplane). Even the sci-fi jets in a poster in Gordon’s room pose with much the same perspective as the model in this screenshot from the documentary:

My 1/48th scale F-4 Phantom hanging in the hall

The interview at the sea-front cafe was hard work because, despite the strong wind, it was so hot outside it was barely possible to think. Much of the dialog was recorded inside the crowded cafe, where it was cooler, but too dark to film. (That part of the interview is rendered as voice-over.) 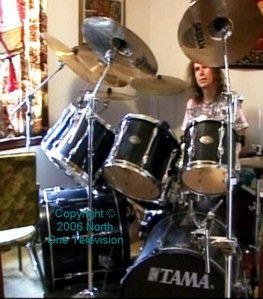 Ready for another narrative connection? Gordon, a talented musician and collector of armaments, lives in Virginia. (Hold that thought…)

One of Gordon’s gals 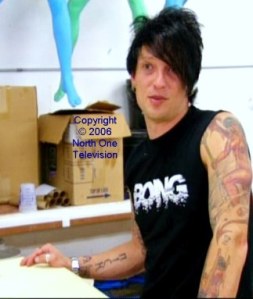 Even Matt, who has a great voice, took a year out to make a bid for stardom — with the rock group Nick Black. Fortunately, he saw the light and went back to work as the sculptor and chief of Abyss Creations, manufacturer of Realdolls. 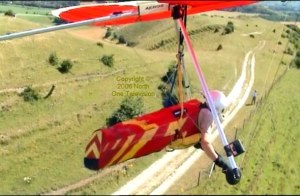 Above the track immediately after launch

The Avon Hang Gliding Club, always forward-thinking, agreed to the use of one of their sites for the documentary. The photo shows how close to the ground I was flying.

Hang glider pilot Gary D (who works in broadcast media) and his then girl-friend spent the day helping out with this flight. Conditions were trying: A small weather front passed through while I rigged the glider. Then the rain stopped, the sun came out, and the strong wind abated for just long enough for me to launch from a low hill.

Afterwards, cameraman and producer Nick Holt chatted with the farmer there, who remembered the 1975 British Hang Gliding Championships held on those same slopes. That was the only other occasion on which I have flown this site.

In contrast to younger girls, who are fascinated by the big dolls, the farmer’s two teenage daughters ignored Virginia. 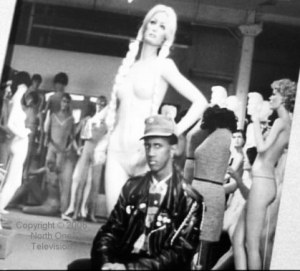 A young Davecat surrounded by mannequins

Davecat, almost certainly the most well-known of the participants, shows some of his mannequin photos and relates anecdotes from his youth.

Slade fits a door to crate

Slade’s input is, in my opinion, the icing on the cake in this illuminating documentary. 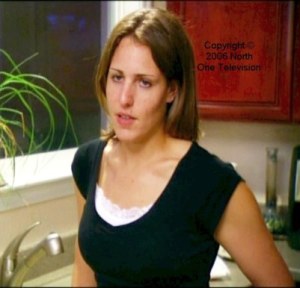 Guys and Dolls was shown on Five in Britain on a Monday evening in the summer of 2006 and, with an estimated 1.5 million viewers, it was their most popular show at that time slot ever. They immediately scheduled a repeat, and it was aired again three weeks later. It has been re-broadcast several times since then and also shown via different broadcasters all over the world.