Ed was named the same as Buzz Aldrin, one of the two men who first landed on the moon — before Aldrin changed officially to Buzz. Long before that landing in 1969, in our two-room apartment at the top of a block where we had a view across London, Ed and I practiced our space flight procedures. One of us sat in a high backed chair laid flat on the floor while the other righted it slowly as we reached orbit and, later, back to the horizontal to withstand the deceleration of re-entry.

My brother and I (with hat) in the New Forest, likely in August 1964

I guess I am grasping at straws in a search for meaning here, but the selection of actor Ryan Gosling, who played an exaggerated version of me in the 2007 movie Lars and the Real Girl (see my review) to play the part of Neil Armstrong in the 2018 movie First Man (see my review) maybe signifies something. I know not what. But in 1994 I had a realistic dream that Ed and I were getting ready to launch in a space craft, with my hang gliding crowd as ground crew. (One of my hang gliding friends at that time was a ‘dead ringer’ for Buzz Aldrin.)

In our early teens we were both into motorcycle trials riding (see Off-road bikes) which was big where our mum moved us to on the south coast, but of the two of us only Ed rode in an actual competition. I don’t have details, but I recall that he did well.

In 1976, at age 19, he went off to Swansea University. He was there for two years I think, before abandoning the course and transferring to the Polytechnic of Wales, where I was also studying by then. While I was learning computer programming, Ed’s field was electronics. However, I heard that he came into conflict with one or more lecturers (in my experience they ranged from great to abysmal) and he transferred again, this time to SELTEC — South-East London Technical College. He emerged in 1982 with an HND in electrical and electronic engineering. We encountered each other increasingly rarely thereafter.

Like all intelligent individuals who speak out when confronted with injustice or incompetence, he accumulated more than his fair share of enemies and people who simply took advantage of him. I heard from various sources that he was often more productive than his workmates, including at an aircraft radio maintenance and repair facility at Bournemouth airport, and his fellow employees made life as difficult as possible for him. 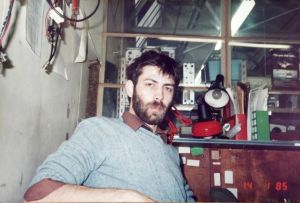 Ed presumably in his workplace, 1985

The camera dates this photo as January 14th, 1985. I do not have his complete career history, but I think it likely this was where he repaired digital storage oscilloscopes in a grim low-rise little industrial park in Ilford, a few miles north of London.

In the 1986-7 he was working in Reading, Berkshire, and was buying a house with a mortgage. Ed was not a ‘people person’ (although he tried to be one much harder than I ever did) and the family who lived there in supposedly rented rooms paid no rent.

A book I read in March 2021 seems to shed light on his different character from mine. (Unlike Ed, I have never had need of companionship in the usual sense, whereas I do need to be the hero of life’s virtual movie, surrounded by beautiful women.) In this story set during the great depression in California, three of Danny’s supposed friends had just accidentally caused one of his two houses (which they lived in but always forgot to pay the rent) to burn down, yet they still needed somewhere to live…

‘For,’ Pilon mused to himself, ‘If this promise were enforced, it would be worse than rent. It would be slavery.’
‘We swear it, Danny!’ he said.
They sat about the stove with tears in their eyes, and their love for one another was almost unbearable.
Pablo wiped his wet eyes with the back of his hand, and he echoed Pilon’s remark. ‘We shall be very happy living here,’ he said.

— Tortilla Flat, 1935, by John Steinbeck, which I came across as a result of others’ contributions to a page I created on the history of hang gliding web site. See under External links later on this page.

After our mother suffered a semi-paralyzing stroke in 1987, Ed moved her into a nursing home in a town near where he worked and lived in Reading, which I could also visit by rail on Saturdays and Sundays from my weekday accommodation in London. One night I stayed at Ed’s place. The tenants had gone, but every item in that house was broken; the side door windows, every ornament, the white ceramics of the gas fires (which fortunately still worked) — everything. But my brother seemed to disregard the damage as if it was normal. (I still have nightmares based on that one overnight stay.)

Despite his difficulties, he organized the second nursing home move of my mother to near our home on the south coast as well as his own relocation back home. I was home only at weekends and Ed took us out in his big yellow Mazda car to interesting places. One such was simply a short dirt track paralleling a paved country road, and he parked there, where the sun shone through trees on both sides and lit a green field beyond. Our old mum enjoyed simple outings such as that. (Over the years after she died, I have attempted to find that place to photograph it, but I have not yet found it.) On another summer’s day in 1988 he took us to the edge of a meadow in the New Forest where his church friends were holding a picnic. While I felt out of place among such people, Ed was clearly well liked by young and old and our mum seemed to be amused and contented to join in — in her speech-less and wheelchair-bound way.

Detail of Orphans of the Sky by Peter Jones, 1974

He went to Australia in the autumn of 1992, staying two years, and became a taxi driver there. After returning to the UK, he worked in several places outside London, I assume in electronic instrument repair. Eventually unable to cope, over the years his state of mind deteriorated. When our mother died in 1995 (one of us said to the other — I forget who — “Mum’s gone on ahead”) it did not appear to affect him much outwardly, but his confusion deepened steadily thereafter. He abandoned electronics and became a taxi driver; a trade he had learned in Australia a few years previously.

I last saw Ed in March 2020 in the local town; a tall figure having difficulty walking. His hair was grayer and his face more lined than I recalled. He had been driven out of his previous apartment three miles away by fire and had moved into housing association accommodation on the other side of town from me. I told him about my great new mountain bike. He said everything in his apartment was too small, including the short bed. (Being well over six feet tall, he had to shop for clothes differently from the rest of us.) I also told him about my advanced prostate cancer, which gave me a life expectancy of only a few years more. It did not occur to me that, at 62 years old, he had less than a year to live.

According to those who knew him in his last few months, weeks, and days, his final decline was mercifully rapid. Unknown to me at the time, he died in a hospice two minutes’ walk away from where I live. (The itemized bill from the funeral director includes, of course, an outsize coffin.) His suffering in life was great, especially toward the end. Everyone who knew him that I have spoken to afterwards agrees that he is in a better place now, wherever that is, even if it is nowhere.

If the story of my life ever makes you sad
Remember when we were a chasing after wooden airplanes
Yes, I believe that was the finest time.

— From the lyrics of Wooden Planes, 1977, written by Jimmy Webb and performed by Art Garfunkel

H.P. source: Selected snippets by H.P. Lovecraft, which enumerates part of the problem that we suffered as a family, and which I believe is largely responsible for the deterioration and early death of my younger brother

Marty Alameda and Flight Designs, an apparently unconnected page I created on my history of hang gliding web site after Ed died in February 2021, but which prompted me to read Steinbeck’s Tortilla Flat, whose viewpoint characters seem to illustrate to me (in an exaggerated way) how Ed’s character differed from my own. In addition, the page includes an indistinct photo of Alameda, who lived in ‘Steinbeck country’ (Salinas, California) at a hang gliding site in Wales in 1979, where I flew frequently earlier that same year. Ed and I were at that time both studying at the Polytechnic of Wales, down the valley a ways.